Standing Up for the Planet and the Future 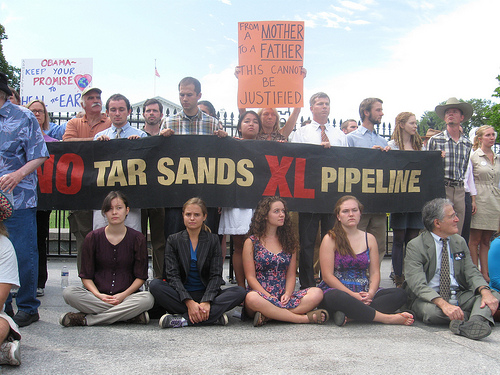 UXBRIDGE, Canada, May 4 2012 (IPS) - What are you doing on Saturday? Peter Nix, a retiree, will be standing on a railway track on Canada’s west coast blocking a coal train destined to ship U.S. and Canadian coal to Asia.

Nix will be joined by dozens of people near White Rock, British Columbia on May 5. They will be in good company as tens of thousands of people around the world participate in global day of action to “connect the dots” between climate change and extreme weather.

“There will be at least 1,200 actions in more than 100 countries,” says Jamie Henn, communications director for 350.org, a U.S.-based environmental group.

The U.S. public is not wrong, say scientists.

“All weather events are affected by climate change because the environment in which they occur is warmer and moister than it used to be,” Kevin Trenberth, senior scientist at the U.S. National Center for Atmospheric Research, told IPS previously.

This year, most of the U.S. and Canada experienced summer in winter with record-shattering heat waves in March. More than 15,000 temperature records were broken in the U.S. which had its first billion-dollar weather disaster of the year. In most places, the spring month of April was colder than March.

“What kind of future are we leaving for our children if we keep putting more carbon into the atmosphere?” asks Nix.

As a former scientist who used to work for the oil industry in Canada’s tar sands, he has a pretty good idea of what’s coming unless fossil fuels are phased out. Catastrophic consequences including everything from droughts, floods, forest fires, food shortages, to increases in tropical diseases and political chaos.

“Politicians are not leading. Corporations are only interested in quick profits. They are the real radicals in our society,” says Nix. This is a reference to a high-level Canadian official who accused environmentalists of having a “radical ideological agenda” in an open letter.

“There is no one left to protect the future for our children but the public,” says Nix.

Every day, six long trains each carrying up to 10,000 tonnes of coal from the U.S. and British Columbia (BC) travel the Burlington Northern Santa Fe (BNSF) rail line to the Westshore Coal Terminal at Delta, BC just north of the U.S. border. It is the busiest coal export port in North America.

The climate-heating carbon in the coal exported every year is equivalent to the annual emissions for the entire province of BC of 4.5 million people and many energy-intense industries like aluminium smelting and mining, says Nix.

“We have to stop burning coal. Leading scientists like James Hansen have made that clear,” he said.

Nix and other members of British Columbians for Climate Action have asked to meet with government officials to work out a plan to phase out coal exports. Their requests have been ignored. Now they have asked U.S. billionaire Warren Buffet to take action. His company Berkshire Hathaway Inc owns BNSF, one of the largest freight networks in North America.

Buffet has previously cancelled plans to build new coal-fired plants in the U.S. In a letter to Buffet, British Columbians for Climate Action write, “…when it comes to climate change it appears that other people are doing all the suffering while you profit from the very causes of the problem.”

On Saturday, 23-year-old Brandon Cormier wants to inform her local residents in the small Canadian town of Orangeville, Ontario about one of the sources of the climate change problem, Canada’s huge tar sands operation that boils oil out sands under its northern forests.

Cormier is organising a demo-fest event as part of International Stop the Tar Sands Day*, which is also May 5.

“I am hoping to make local people more aware of climate change, and that the tar sands are a big contributor,” says Cormier, who has never done anything like this.

International Stop the Tar Sands Day has been held annually since 2010 with events in 50 cities around the world last year. It involves playful demonstration-festivals involving music, dancing, costumes, handing out flowers and postcards as part of an awareness-raising effort.

The tar sands operations in the province of Alberta supply the US with more than 2.4 million barrels of heavy oil a day. Considered “dirty oil” because requires large amounts of natural gas and clean water to extract it from the ground, it is under growing international pressure as a major source of carbon emissions and over destruction of thousands of kilometres of forests and wetlands.

“Not many people I know want to help me with this. They think that it is silly being so far away (from Alberta)….But I won’t let that discourage me. It’s everyone’s planet.”

Cormier she says even if just one more person goes home on Saturday to research the impacts of the tar sands and spreads the word, it will have been a success. “I am happy that I am able to make a difference even if it is small.”