TUCSON, Arizona, May 8 2012 (IPS) - In December 1985, The New York Times reported on what was believed to be the first anti-apartheid conference of U.S. high schools discussing divestment from corporations operating in South Africa. 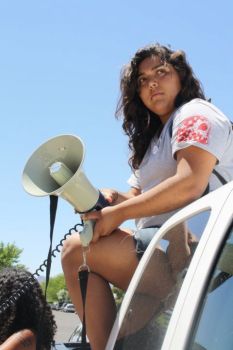 Across the U.S., ethnic minority youth are at the forefront of struggles over immigrant rights and Palestine solidarity. Credit: Courtesy of UNIDOS

Sixteen independent schools met at St. James Episcopal Church in Manhattan to discuss the divestment question, which was raging mostly on college campuses throughout the U.S.

In the background, the Times reported, was a mailing by the National Association of Independent Schools “urging the organization’s 1,000 members to ‘declare their opposition to apartheid as part of their educational responsibility’ and to ‘seek out ways to give substance to their declaration.'”

It was no secret that youth 27 years ago were leading the way and school officials themselves were forced to react. The chair of the conference admitted that he and his constituents didn’t want to “preach to anyone” but rather “facilitate a movement that’s going on all across the country”.

Others elaborated on their desire to aid future youth in similar situations. “We’re training future leaders,” Sister Virginia Mary of St. Hilda’s and St. Hugh’s School told the Times, “who will have to know what responses to make to these issues.”

Today, these “future leaders” can be found in a community-based movement led by youngsters shaking Arizona.

The young students are also shaking the country to its bones with their struggle that is intimately local – while also one that reverberates across an entire nation where anti-immigrant sentiment abounds – to preserve and defend what has long been the sole K-12 Mexican-American Studies (MAS) programme (a.k.a. “Ethnic Studies”) in the U.S., outlawed by Arizona on May 10, 2010.

Asiya Mir, currently a senior at Tucson High Magnet School, is one of the teenagers in the youth activist coalition UNIDOS who made national headlines last April when she and fellow youth chained themselves to Tucson Unified School District (TUSD) board members’ chairs and dais to prevent the board from voting to dismantle MAS.

After a dramatic battle with a mobilised local community, the board finally terminated the programme this past January after state authorities inflicted crippling economic sanctions on the district. The programme’s books were then banned from the classrooms, followed by the recent firing of the MAS programme director and student employees.

Despite the district’s purges, a movement has blossomed and continues to grow.

Meanwhile, these youth are not quarantined around one single issue. Many of the students are international in their vision and commitment to justice.

Mir is also the founder of Tucson High’s chapter of Students for Justice in Palestine (SJP), a leading force on college campuses which give host to nearly 150 chapters to date, according to national data from the group’s first major conference last October.

“As a student living in a racist state attempting to rob my ethnic studies education from me,” Mir told IPS, “I feel a close, personal affinity with my fellow students in Palestine who live under and struggle against Israeli aggression, terror, and cultural theft.

“I embrace these students as my own; they are me, their struggle is mine,” she said.

Her words might be likened to the outlawed concept of “ethnic solidarity”, in the words of the Arizona State Legislature in HB 2281 (the MAS ban). Mir’s words themselves are a variation of one of the primary indigenous concepts that forms the core of Ethnic Studies known as “In Lak Ech,” – or “Tú eres mi otro yo / You are my other self.”

Mir is not the only high schooler driven by a pursuit of international justice in Israeli-occupied Palestine. All around the country youth carry themselves with remarkable eloquence, moral clarity, and passion on an issue increasingly popular on college – and now high school – campuses.

In Virginia, SJP attracted a young amateur archer and aspiring journalist named Mallika Patkar. Virginia-born Patkar, whose parents are originally from India, is a junior at Thomas Jefferson High School for Science and Technology. Last summer, she interned in the Washington, D.C. office of Israel’s leading human rights group, B’Tselem, the Israeli Information Center for Human Rights in the Occupied Territories.

“I truly believe that if more American citizens gain more knowledge on this conflict, then we can pressure our government to do something, and if necessary, break our bond with Israel,” she told IPS.

Back in Tucson, Mir’s peer, Denise Rebeil, who also participated in last year’s chain-in at the district office while attending Rincon High School, is now a freshman at Tucson’s University of Arizona (UA). Earlier this spring, Rebeil, with fellow UNIDOS, SJP and other youth activists, wrote a handsigned letter to the UA president regarding a new boycott/divestment movement sweeping the country throughout churches, campuses and communities.

The students, and their lawyers, invited the administration to “negotiate a timetable for full and complete severance (or divestment) from the University of Arizona’s licensing contracts” with the CAT and Motorola corporations for the companies’ role in human rights abuses along the U.S./Mexico border and in Israeli- occupied Palestine.

This particular campaign has raged for three years and has garnered enough publicly incriminating remarks by UA officials to support the country’s first potential divestment lawsuit since the anti-apartheid era if the UA fails to negotiate with them.

There’s no telling what these students will do if school authorities fail on their part to “facilitate a movement that’s going on all across the country”. One thing is certain: history cautions that students’ dedication and persistence not be taken lightly. These students are rising to the occasion. And they know it.

There’s a bold assurance in the words and actions of these youth. As young Nadine joyously reflects, “There’s no greater feeling than standing on the right side of history.”