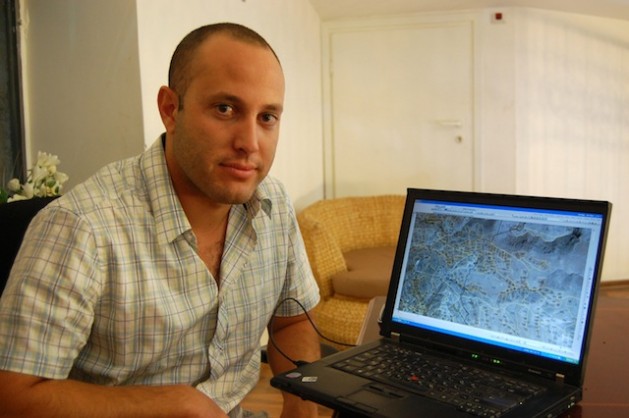 ROAD 60, OCCUPIED WEST BANK, Jul 30 2012 (IPS) - Sitting in an airconditioned car along Road 60 in the heart of the occupied West Bank, Ovad Arad explained how he goes about his job: driving unannounced into Palestinian towns and villages, taking photographs, having coffee with families, and leaving almost as quickly as he arrived.

“I don’t lie. When they ask me what I’m doing there, I say I’m doing research into the area. I try not to go into deep conversation. I do the work and go,” Arad told IPS. But he adds that he doesn’t reveal who he works for, or the real reason he takes photos.

A resident of the Israeli settlement Mero Horon, Arad is head of the Judea and Samaria (West Bank) division of Regavim, a right-wing Israeli organisation whose work focuses primarily on using legal channels to have demolition orders on Palestinian homes and other structures carried out.

Regavim works mainly in the Negev desert in southern Israel and Area C of the occupied West Bank, which covers approximately 60 percent of the territory and, according to the 1995 Oslo Accords, is under complete Israeli military and administrative control.

Approximately 150,000 Palestinians and 300,000 Israeli settlers currently live in Area C. Israeli settlements are illegal under the Fourth Geneva Convention, and settlement outposts are illegal under Israel’s own laws. Under international law, Israel – as the occupying power in the area – is also responsible for providing for the needs of the population living under its control, namely the Palestinians.

For Regavim, however, the applicability of international law to Israel’s control of the West Bank is up for debate. “The position of Regavim (is that) there is no (Israeli) occupation,” said Ari Briggs, director of Regavim’s International Department.

Regavim relies on the legal framework of the Oslo Accords in carrying out its work in the West Bank, Briggs explained. He said that Regavim gets most of its information through freedom of information requests submitted to the civil administration.

“There are too many lies flying around that actually there’s discrimination against Arabs, and (that) the government and the civil administration is fully pro-Jewish. And we’re saying actually it’s the opposite.”

On its website, Regavim describes itself as “a social movement established to promote a Jewish Zionist agenda for the State of Israel” that “protect Israel’s lands and national properties.” Despite this mission statement, Briggs told IPS that Regavim’s work isn’t politically motivated, but rather guided by “moral and ethical” considerations.

Not everyone is convinced.

“We are concerned about Regavim’s involvement because we see them as a very, very political organisation,” said attorney Tamar Feldman, director of the Association for Civil Rights in Israel (ACRI) department of human rights in the occupied territories.

Feldman explained that Regavim petitions have sped up legal processes and awakened cases dealing with Palestinian building and planning in Area C, in particular in the South Hebron hills, one of the poorest and most disadvantaged regions in the area.

While Briggs was unable to provide exact data about the number of demolitions executed as a result of Regavim’s work, the organisation recently appealed to the Israeli Supreme Court to carry out 162 interim orders on Palestinian constructions, which have been frozen since 2008.

One of the most prominent cases of Regavim’s influence has been in Susiya, a Palestinian village in the South Hebron hills, which, after Regavim appealed to the Israeli Supreme Court to carry out demolition orders, now faces the prospect of being completely razed to the ground.

“They portray the situation in Area C as if Palestinians don’t have any rights there, they are just stealing the land, it belongs to Israel and the Jewish people and (the Palestinians) are outlaws. This has very little to do with reality,” Feldman said.

“The Palestinians in those areas, (like the) South Hebron Hills and Jordan Valley, have been sitting there for many decades, and for generations on.”

According to the United Nations Office for the Coordination of Humanitarian Affairs (UN-OCHA) in the occupied territories, the Israeli Civil Administration rejected 94 percent of Palestinians’ building permit applications in Area C between 2000 and 2007.