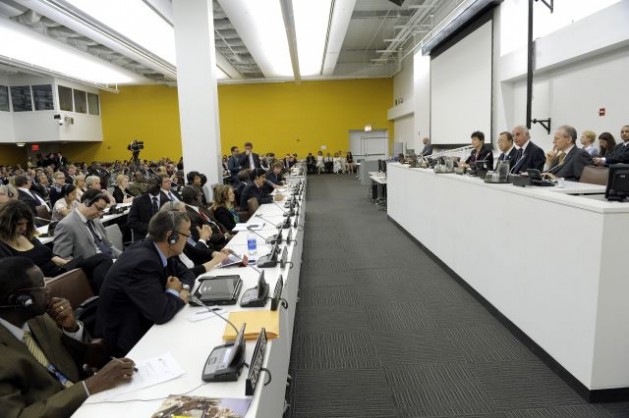 WASHINGTON, Jul 18 2012 (IPS) - More than halfway through four-week negotiations for a binding treaty to regulate the global weapons trade, observers are warning that the talks are a week behind schedule.

The culmination of three years of preparations and a decade of advocacy, since Jul. 2 representatives from more than 100 countries have been meeting at the United Nations headquarters in New York in an attempt to work out an agreement on an arms trade treaty (ATT) ahead of a Jul. 27 deadline.

“Progress has been slow, and that’s probably being generous,” Daryl G. Kimball, executive director of the Arms Control Association, based here in Washington, told IPS from the talks.

“States are offering general observations, but it’s pretty clear that key negotiating parties are going to have to really focus in the next two or three days in order to pull together a negotiating text. The chairman is going to have to perform some minor miracles to herd the cats.”

After an initial Egypt-led argument over the status of the Palestinian delegation ate up nearly the first three days of talks, “The negotiations are running at least a week behind schedule,” Anna MacDonald, head of Arms Control with Oxfam, the international relief agency, said on Tuesday.

In the run-up to the discussions, commentators have pointed out that, with no common international regulations on the arms trade – an industry worth 40 to 60 billion dollars a year – it is currently more difficult to trade in fruit than in guns.

The effect of this, according to advocates across the globe, has been to escalate instances of violence and human rights abuses, with Sudan, Syria and Congo being only some of the most notable current examples.

“The Liberian experience and other experiences in Africa and other parts of the world show that without such a treaty, armed violence and wars will continue to be fuelled by irresponsible arms transfers,” President Sirleaf said.

“Even with a U.N. and regional arms embargo on Liberia and other countries, more than 2.2 billion dollars’ worth of arms and ammunition found their way into the targeted countries, thus proving that the current system, without a treaty, is not working.”

A draft negotiating text should be formulated within the next few days, offering observers insight into where progress has been made since the initial publication of a series of working papers.

The nuances of the draft will be critical not only because of the potentially broad humanitarian consequences of any one section but also because passage of any final treaty will depend on consensus among all parties. This last point was demanded by the administration of President Barack Obama in exchange for overturning previous U.S. policy that had opposed passage of the ATT.

As the largest weapons exporter in the world, the U.S. position has inevitably come under particular scrutiny during the treaty negotiations.

Although the notoriously strong pro-gun lobby in the United States has mounted a furious campaign opposing the ATT – succeeding, in late June, in getting 130 members of the U.S. Congress to write a letter of opposition to President Obama – the treaty has received high-level support from sections of the U.S. military (including in recently published articles here and here).

Currently at issue is the scope of the treaty, whether it will cover, for instance, arms brokers or ammunition, the latter a point long seen as central by advocacy groups but currently being opposed by a small group of countries, including the United States.

“The U.S. has hardened its stance on wanting to see ammunition removed from the treaty and has argued for weaker provisions on criteria – so wants to water down the rule on human rights,” reports Control Arms, a global network pushing for a strong ATT, in a brief published on Tuesday, noting that the position is receiving strong support from India and others.

“Many states are unhappy with the U.S., China, Egypt, Iran among others for wanting ammunition excluded from the scope of equipment to be controlled under the treaty. This would severely undermine the treaty.”

Several civil society groups are also currently focusing on the criteria that would regulate weapons transfers. On Tuesday, Sweden, Kenya and others reportedly called for sustainable development to be included in the criteria list, according to Jeff Abramson of Control Arms.

Of central concern for many is how and whether human rights would be among those criteria. This was the heart of the matter, for example, around the recent concerns that Russia was engaging in weapons sales with Syria despite reports of massive human rights abuses in the latter.

Some countries, such as China, don’t want references to human rights to be included at all. On Tuesday, Amnesty International, an advocacy group, called on President Obama to reject moves to weaken human rights obligations.

“Any escape clause that overrides human rights in the ATT would send a signal that countries can carry on with business as usual,” Suzanne Nossel, executive director of Amnesty International USA, said in statement. “Millions of lives depend on strong human rights protections being in the final agreement.”

According to Control Arms, some of the countries most adamantly opposed to the ATT include Algeria, Cuba, Egypt, Iran, North Korea and Syria (also collated on this new map).

Those most strongly supporting the treaty include Australia, Germany, Japan, Mexico, New Zealand, Norway and Sweden, as well as most Caribbean and sub-Saharan African countries.