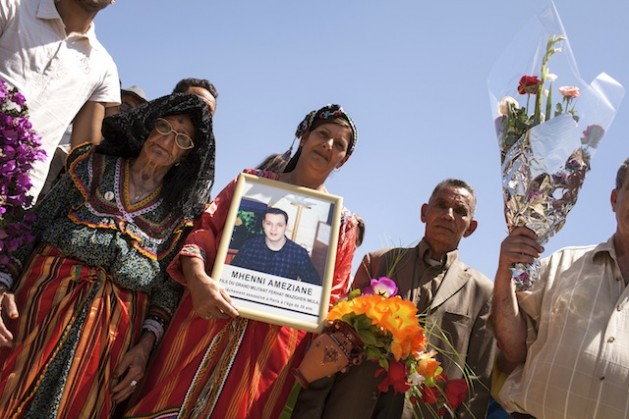 TIZI OUZOU, Aug 7 2012 (IPS) - Untamed stone villages line up over imposing green valleys. In winter they are white with snow. The luckiest have a view to the deep blue sea. “It’s gorgeous, isn’t it,” says Amzi from his yellow cab. “Nobody would say we’re living in an open-air prison.”

The road signs in Arabic blotted with graffiti are of little help to the unexpected foreigner. But they are a graphic reminder of a latent political conflict since Algeria gained independence from France in 1962.

Located on the northern Mediterranean coast of Algeria, Denmark-sized Kabylia was an independent country throughout the Middle Ages and during the Ottoman days. It became a part of Algeria under French colonisation in the mid-19th century. Its more than six million inhabitants are the Amazigh – also called Berbers. They were present long before the Arabs came in the seventh century C.E.

“Arab Algeria replaced French Algeria, it was just a transfer of power during which our people were left aside,” says Razik Zouaoi at a cafeteria in Tizi Ouzou, Kabylia’s administrative capital 110 kilometres east of Algerian capital Algiers.

Zouai is an activist struggling for the rights of Amazigh language still spoken from Morocco’s Atlantic coast to the west bank of the Nile, in Egypt. The Touareg tribes in the interior of the Sahara desert share the same ancient tongue.

“We have all been subjected to a centuries-long Arabisation process that has had a devastating effect on us,” says Zouaoi.

On a map, the most obvious traces of the alleged assimilation are the Arabised names: Vgayett became “Bejaia”; Tubirett is known as “Bouira”…

Deep in the Kabylian hinterland, 35 miles southwest of Tizi Ouzou, lies the small village Beni Yenni – Ait-Yenni in Amazigh language. In its tiny but busy square, a young man who asks not to be identified complains about the numerous controls across the mountain region.

“The police even use explosive detectors at every checkpoint. Today they made me open the trunk three times on the way back from Tizi. How come the Islamist gangs operate here, and with heavy weapons and ammunition?”

“We live behind the walls of an immense barracks,” Bouaziz Ait-Chebib, president of the Movement for the Autonomy of Kabylia (MAK) tells IPS at the same location. “Over 40 percent of the Algerian security forces are stationed in Kabylia; there’s the army, the gendarmerie, the police, the DRS (Department of Information and Security) agents.”

Ait-Chebib defines the movement he leads, founded in 2001, as “a group that seeks to shake off the Arab-Islamic yoke and fight for the right of self determination.” He adds: “We are the leading political force in the region.”

After a bloody civil war that erupted in 1991 and resulted in about 200,000 dead, Algerian president Abdelaziz Bouteflika initiated a reconciliation process that included an amnesty for Islamists. But in June, Algerian police chief General Abdelghani Hamel said the “terrorist threat is still present throughout the country,” in clear reference to groups paying allegiance to Al-Qaeda.

Attacks by suspected Jihadist groups have seemingly become an endemic phenomenon in Kabylia. In June, 14 Islamists were killed during clashes with the security forces.

The MAK president has little doubt about the reasons behind the increasing number of armed gangs. “While they are often described as opposing forces, both the government and the fundamentalists have never hesitated to join forces when it comes to wiping out our people, just because we are neither Arab nor Islamic. Both are but sides of the same coin.” But the two do seem to share an uneasy relationship.

“To the enforced disappearances and indiscriminate arrests by the security forces we have to add the hostages taken by the armed bandits,” Hocine Azem, chairman of the Amazigh League of Human Rights (LADH) tells IPS. “Only in Tizi Ouzou 69 people have been kidnapped since 2005 amid the indifference of the police.” Azem talks of a “programmed campaign of extortion against local entrepreneurs” and of a campaign of deforestation in Kabylia.

“The police are setting fire to acres of olive trees under the pretext of what they call “anti-terrorist operations”, Azem says. “Ours is a rural area, hence our oil comes from olives. These actions are designed to stifle our people economically and force them to abandon their land.” These developments, he says, were included in a report his organisation produced and handed to Geneva’s Human Rights Commission in mid-July.

International organisations such as Amnesty International and Human Rights Watch have noted hundreds of cases of torture and other ill-treatment. Both NGOs have reported that many of these abuses have been committed by the DRS in secret detention centres where inmates are denied any contact with the outside world.

The tiny village Maraghna, 25 kilometres southeast Tizi Ouzou, is the hometown of Ferhat Mehenni, a well-known Amazigh singer who was first chairman of the MAK. His 19-year-old son Ameziane Mehenni was killed in Paris in 2004, in an action many have understood as an act of punishment for Mehenni’s political activities. Ferhat Mehenni remains president of the Paris-based ‘Provisional Government of Kabylia’.

The PGK said in a statement late July that the Algerian police had turned into an “Iranian-type Islamic morality militia” after the security forces brutally beat up a young man for breaking the fast during Ramadan, the Muslim month of fasting.

“Algeria is a huge minefield,” says jeweller Mohamed Akbal from his little studio in Beni Yenni. “You never know where or when something will go off under your feet.”