WASHINGTON, Oct 24 2012 (IPS) - While religious coalitions in the United States have remained generally stable during the 2008 and 2012 president election campaigns, new research released here on Tuesday suggests far more complexity among what is often called the U.S. “values voter”. 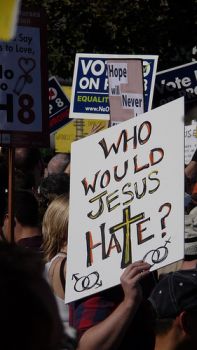 Marchers in San Francisco rally of marriage equality. The new survey shows widely divergent views among Catholics, including those who according to demographics would be considered more conservative. Credit: bastique/cc by 2.0

It also alludes to potential demographic and political changes on the horizon.

“Over past the decade, the media made much of ‘values voters’, as though there is a particular kind of values, generally conservative,” Michele Dillon, chair of the Sociology Department at the University of New Hampshire,” said at the unveiling of the 2012 American Values Survey.

“But what we see here… is that for most people religious values are not on the tops of their minds. Even when they are, most voters are not single-issue voters – they care about a number of things simultaneously.”

Interestingly, defining those values appears to fall more to political than to religious leaders, and thus could shift more easily with the evolution of political trends.

“One big thing the survey does is to look at religious churn in American public life – a remarkable amount of switching has gone on, and seemingly stable coalitions are only masking significant movement under the surface,” Robert P. Jones, the founder of the Public Religion Research Institute, which put out the survey, said Tuesday.

Jones said there are “very stark divisions” between the religious coalitions that make up Barack Obama’s political base versus that of his opponent, the Republican challenger Mitt Romney.

At the other end of the spectrum are religiously unaffiliated voters, one of the single fastest-growing portions of the U.S. populace and also one that is more likely to be younger. Voters self-identified in this way show lopsided support for Obama over Romney, with nearly three-quarters saying they support the president.

“The Republican religious coalition is relatively homogenous,” E.J. Dionne, Jr., a senior fellow with the Brookings Institution, a think tank here, says. “On the other hand, the Democratic coalition includes the most and the least religious groups in the country – African Americans and those who are secular and religious unaffiliated. That explains a lot about how these issues are discussed within the Democratic Party.”

Catholics, meanwhile, have fallen between these coalitions. For this reason, this group has also been strongly targeted by both parties, with commentators widely referring to the “Catholic vote” and the assumption that Catholics will tend to support the more conservative Republican Party.

In fact, the new survey shows widely divergent views among Catholics, including those who according to demographics would be considered more conservative.

“Over the last decade, Catholics in the United States have engaged in a vigorous debate on which aspects of Catholic teaching should be given priority in public debate – social justice versus gay marriage and abortion,” Dionne says.

“Very strikingly, 60 percent of Catholics said that in its public statements the Catholic Church should focus more on social justice and the obligation to help the poor – even if doing so meant focusing less on issues like abortion. This included a majority of those who attend church at least once a week.”

Likewise, more than twice as many respondents – 63 versus 32 percent – say that government policies aimed at helping the poor serve as a crucial safety net versus “creating a culture of dependency”.

Interestingly, the subsection of Catholics that appears to skew more conservative on these issues as a bloc are Hispanics, which make up almost a third of U.S. Catholics and constitute another extremely fast-growing populace. Yet support for Obama among Hispanics remains extremely high, at around 70 percent.

Anecdotally at least, issues related to social justice and safety nets would tend to be aligned more with the Democratic rather than Republican Party. Yet some caution reading too much into the future implications of these coalitions.

“The two fastest increasing populations are Hispanic Catholics and the religiously unaffiliated, both of which lean democratic. While this could be part of an emerging majority, is this necessarily good news for democrats?” asks John Sides, an associate professor of political science at George Washington University, based here.

“In fact, there are lower levels of political engagement among Hispanics and the religiously unaffiliated, and with young people generally. So it’s not clear that their growth in numerical terms translates into votes.”

Nonetheless, the broader implications of the new survey’s findings are clear, Sides says.

“Many facts in this report suggest that people don’t think about politics religiously, that people don’t necessarily translate their religious precepts into political choices,” he says, pointing to the social justice findings as well as separate data suggesting that large numbers of Catholics accept issues such as abortion and contraception, despite the Catholic Church’s strong positions on these matters.

“Americans are much more divided by party than they are by religion – that’s why evangelicals have embraced Romney, a Mormon. So how much political persuasion is really going on in the pews? It’s pretty clear that oftentimes those messages aren’t getting through – political leaders seem to be doing a better job of providing certain lessons than religious leaders.”