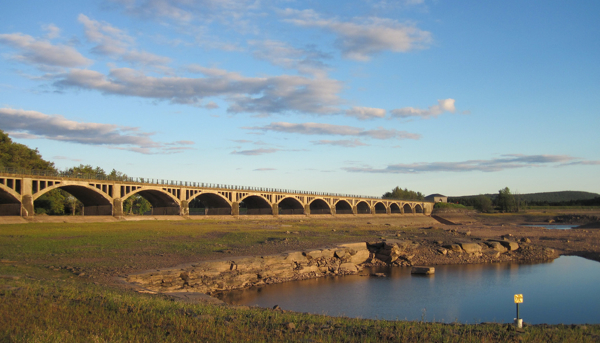 Protecting natural watershed areas is considered a sustainable and cost-effective approach to ensuring a supply of potable water. Above, the Ashokan Reservoir in New York state. Credit: ScubaBear68/CC by 2.0

UXBRIDGE, Canada, Jan 18 2013 (IPS) - After Hurricane Sandy swept through the northeast of the United States late October 2012, millions of New Yorkers were left for days without electricity.  But they still had access to drinking water, thanks to New York City’s reliance on protected watershed areas for potable water.

Instead of using electric-powered water treatment plans, New York City brings its high-quality drinking water through aqueducts connected to protected areas in the nearby Catskill/Delaware forests and wetlands – just one example of how protecting watersheds can provide residential areas with drinking water and flood and pollution protection at bargain basement prices.

New York saved between four and six billion dollars on the cost of water treatment plants by protecting forests and compensating farmers in the Catskills for reducing pollution in lakes and streams.

In 2011, countries around the world invested more than eight billion dollars in similar watershed projects around the world, according to the State of Watershed Payments 2012 report released Thursday. That year, China led the way, accounting for 91 percent of watershed investment.

“Whether you need to save water-starved China from economic ruin or protect drinking water for New York City, investing in natural resources is emerging as the most cost-efficient and effective way to secure clean water and recharge our dangerously depleted streams and aquifers,” said Michael Jenkins, president of Forest Trends, a non-governmental organisation (NGO) in the United States, which compiled the report.

Previous studies have shown that pollution, the building of dams, agricultural runoff, conversion of wetlands, and waterworks engineering have severely affected global river systems. The wealthier the country, the bigger the threat to river systems, primarily because of expensive waterworks engineering, according to the first-ever health assessment of river ecosystems around the world, as previously reported by IPS.

Given the water engineering mentality of the 1990s, it wasn’t easy to convince health and safety officials that a “green waterworks” approach would work for New York City, said Genevieve Bennett, lead author of the Watershed Payments report and a research analyst with Ecosystem Marketplace.

But trees, grasses and plants are extremely effective at cleaning and retaining water, as well as reducing sedimentation that clogs water reservoirs, Bennett told IPS. “The benefits from these watershed programs extend far beyond water: they support biodiversity, reduce greenhouse gas emissions, and provide income for the rural poor,” she said.

In watershed protection programs such as those in New York, farmers are paid to use soil and water conservation techniques – payment for good stewardship that benefits the public, Bennett added.

Government regulations, however, remain a major constraint to similar projects in many countries. New York’s well documented and highly successful strategy has not been emulated by many other cities, including those in China or India, where engineering expertise is highly prized and huge engineering works are a matter of national pride.

Investing in sustaining existing ecosystems is better than destroying them and attempting to engineer solutions, Charles Vörösmarty, an expert on global water resources, previously told IPS. Water management costs will skyrocket if developing countries adopt the approach of developed nations, he added.

China is one country that has begun to change its approach, according to the report. About 108,000 residents in struggling communities upstream of the southern coastal city of Zhuhai are receiving new health insurance benefits in exchange for adopting land management practices to improve drinking water in the region.

“There are lots of different ways watershed investments are being made in China, some good and some bad. There’s lots of learning happening,” said Bennett.

In Latin America, the trend in water programs is to offer compensation other than cash for protecting water resources. In Bolivia’s Santa Cruz valley, for example, more than 500 families receive beehives, fruit plants and wire, which can be used for fencing to keep livestock away from rivers and stream banks, in return for their water protection efforts.

A Swedish local water authority found it cheaper to pay for a program to establish blue mussel beds in Gullmar Fjord to filter nitrate pollution than to build a new treatment facility on shore. In Uganda, a beer brewer is paying for the protection of wetlands to retain their valuable capacity to maintain a steady and abundant supply of clean water.

The vast majority of investments in watersheds are with public money. The private sector still thinks providing good quality water is up to governments, Bennett said. However, the public sector is unlikely to be able to invest the 17.7 trillion dollars needed for water infrastructure by 2030, according to the Organisation for Economic Cooperation and Development (OECD).

A green infrastructure is by far the cheaper option and provides a host of other benefits, Bennett concluded.