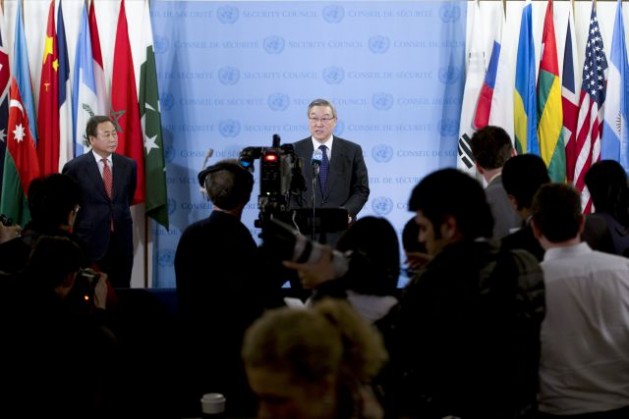 Kim Sung-hwan, Minister for Foreign Affairs and Trade of the Republic of Korea and President of the Security Council for the month of February, delivers a Council press statement strongly condemning the nuclear test conducted by the Democratic People’s Republic of Korea (DPRK). Credit: UN Photo/Mark Garten

UNITED NATIONS, Feb 12 2013 (IPS) - North Korea, which conducted its third nuclear test Monday, is following closely in the heavy footsteps of Israel as one of the world’s most intransigent nations, ignoring Security Council resolutions and defying the international community.

“Israel has the United States as its patron saint,” says a Middle Eastern diplomat, speaking on condition of anonymity, “and North Korea has China’s protective arm as an enduring shield.”

Still, three Security Council resolutions – in 2006, 2009 and 2013 – critical of North Korea’s nuclear programme and tightening sanctions on Pyongyang – had the blessings of China, a permanent member with veto powers.

"Giving status to those who flout the world's collective security treaties such as the Comprehensive Test Ban Treaty and the NPT is like a slap in the face to the law-abiding majority..."

But the harshest of possible sanctions – a naval blockade, an oil embargo or a cutoff of economic aid from China – have escaped Security Council resolutions, at least so far.

The 15-member Council met in an emergency session Tuesday and issued a predictable statement condemning the test as “a grave violation” of its three resolutions and describing North Korea as a country which is “a clear threat to international peace and security”.

When the Council adopted its third resolution last January, it expressed a determination to take “significant action” in the event of a “further” nuclear test by North Korea.

But that “significant action” will have to wait another day.

On Tuesday, the Council claimed it “will begin work immediately on appropriate measures” in an upcoming, possibly watered down, resolution.

Dr. Rebecca Johnson, co-chair of the International Campaign to Abolish Nuclear Weapons, told IPS that the logic and optics of nuclear deterrence means that North Korea’s tests are designed to convince the United States (at least) that it has the ability to make and deliver nuclear warheads.

“It is entirely counterproductive to talk about the countries that conduct nuclear tests or deploy nuclear weapons as ‘nuclear powers’ – giving status to those who flout the world’s collective security treaties such as the Comprehensive Test Ban Treaty (CTBT) and the NPT is like a slap in the face to the law-abiding majority – over 180 countries – that have renounced nuclear weapons and testing,” she added.

The nuclear-armed states – whether defined under the NPT or posturing outside the NPT like North Korea – are security problems for the world, she said.

And North Korea has demonstrated once again that nuclear weapons are what weak leaders think they need to divert attention from their failed economic and social policies at home, said Johnson, author of “Unfinished Business”, the authoritative book on the CTBT published by the United Nations in 2009.

Asked if the test proves that North Korea, also known as the Democratic People’s Republic of Korea (DPRK), is ready to go nuclear, Phillip Schell, researcher on the Nuclear Weapons Project, Arms Control and Non-proliferation Programme at the Stockholm International Peace Research Institute (SIPRI), told IPS Tuesday’s test doesn’t prove that North Korea is on the verge of becoming a full-fledged nuclear power, comparable to the P5.

However, the series of three tests – although the first one is widely believed to have been a failure – certainly indicate progress in the DPRK’s nuclear weapons programme, he said.

At the same time, while it appears to be the DPRK’s goal is to develop a miniaturised nuclear warhead that could be fitted on a ballistic missile, there have been no signs so far that the DPRK has actually achieved “weaponisation” of the nuclear devices that were tested.

Whether the DPRK currently possesses the necessary long-range missile technology is also doubtful, he said. However, the successful launch of a multi-stage rocket suggests that it is gradually mastering such technology.

Schell also pointed out that the DPRK withdrew from the NPT (although some states don’t recognise its withdrawal). Furthermore, it did not sign or ratify the Comprehensive Test Ban Treaty.

However, the Security Council Resolutions 1718, 1874, and 2087 prohibit DPRK from conducting future nuclear tests or launches that involve ballistic missile technology. These resolutions, said Schell, are de facto legally binding. On the other hand, the DPRK sees these as discriminatory.

Asked about the DPRK argument that its nuclear tests are few and far between compared to all the nuclear tests conducted by the P5, Johnson told IPS this argument is “specious nonsense”.

“Do we absolve a murderer who argues that he only occasionally kills people, contrasting this with the mass murders carried out by serial killers and other criminals? Of course not.”

She said that just as each act of murder is a crime, each nuclear test violates international treaties, laws and collectively agreed means for establishing global security.

“The fact that others sinned with impunity before the international community could establish the nuclear test ban treaty is no excuse now,” Johnson said.