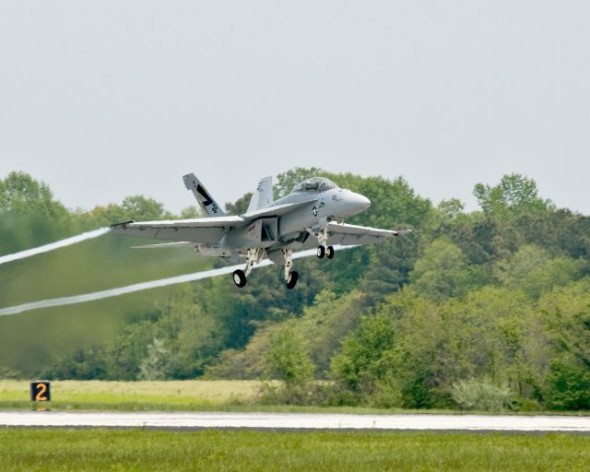 The "Green Hornet," an F/A-18 Super Hornet strike fighter jet powered by a 50/50 biofuel blend. The U.S. is far and away the world's biggest military spender. Credit: U.S. Navy

UNITED NATIONS, Apr 15 2013 (IPS) - The spreading economic crisis is taking a bite out of Western military spending – even as the world’s developing nations, along with Russia and China, boosted their arms expenditures last year.

The fall, described as the first since 1998, was attributed to major spending cuts primarily by austerity-driven and deficit-plagued Western nations.

“We are seeing what may be the beginning of a shift in the balance of world military spending, from the rich Western countries to emerging regions,” says Dr. Samuel Perlo-Freeman, director of SIPRI’s Military Expenditure and Arms Production Programme.

Since the 2008 global financial crisis, 18 of the 31 countries in the European Union, mostly countries of the North Atlantic Treaty Organisation (NATO), have cut military spending by more than 10 percent in real terms.

And, despite these cuts, members of NATO collectively spent a trillion dollars.

Still, the United States and its allies are responsible for the great majority of world military spending.

The United States, the world’s largest military spender, announced last week that its 2013 proposed defence budget will amount to about 526.6 billion dollars: a reduction of 3.9 billion dollars compared with its 2012 budget.

The 2013 budget will include “substantial reductions” for the U.S. army, which was heavily involved in military operations in Afghanistan, and to a lesser extent in Iraq.

The drawdown in Afghanistan is primarily responsible for reduced spending by the United States.

The reductions were, however, “substantially offset” by increased spending in Asia, Eastern Europe, the Middle East, North Africa, and Latin America, according to SIPRI.

According to the study, overall world military expenditure totalled 1.75 trillion dollars in 2012, a fall of 0.5 percent in real terms since 2011.

Asked whether military spending was primarily on arms purchases overseas or acquisitions from domestic weapons industries, Perlo-Freeman told IPS the figures include spending both on arms imports and on domestic procurement.

He pointed out that there are very few countries worldwide that rely on their domestic arms industries for “most” of their military equipment. These are probably limited to the United States, Russia, the UK, France, Germany, Italy, Spain, Sweden, and Japan, and possibly China and Israel.

However, there are many more countries that produce some of their own equipment, but still rely on imports for certain major systems.

In Asia, he said, China has an increasingly advanced arms industry able to produce across all types of equipment, and have been gradually weaning themselves off Russian imports that they were previously highly dependent on.

However, they still import quite a lot, he added.

South Korea also has a strongly developing industry, although it still has to import equipment from the U.S., such as advanced combat aircraft.

India, he pointed out, has a large arms industry, but not a very effective one, probably due to an extremely inefficient bureaucracy in charge of the industry.

“Despite decades of effort, they have not succeeded in being able to develop and produce their own advanced weapons systems,” Perlo-Freeman noted.

“They have a local content of arms procurement of I think about 300 percent, but a lot of that consists of e.g. assembly from kit under license of other countries’ systems,” he said.

Elsewhere in Asia, Singapore has a significant industry with strength in certain niches, but still imports most of its equipment.

There are many other countries with some low level arms production, like Indonesia.

“And North Korea, of course, has a major industry, though that’s a rather special case,” Perlo-Freeman said.

In the Middle East, Israel has an extremely advanced arms industry, in some areas (e.g. it is a world leader in unmanned aerial vehicles). But it still imports – mostly under U.S. military aid – in particular major combat aircraft, which Israel doesn’t produce itself.

“They almost certainly could, but why bother when they get them for free from the U.S.?” he said.

He also said that Turkey has a well-developed industry in some areas, but still imports the majority of its equipment.

Iran has a local arms industry but it is not very advanced in most respects. It has imported a lot from Russia in the past, though now of course this is affected by sanctions.

The United Arab Emirates (UAE) and Jordan produce some armoured vehicles, but still import the great majority of their arms.

In Africa, the only country with a significant industry is South Africa, although it also imports a lot, he said.

In Latin America, the only country with a significant industry is Brazil, though again it still imports the great majority of its major equipment.