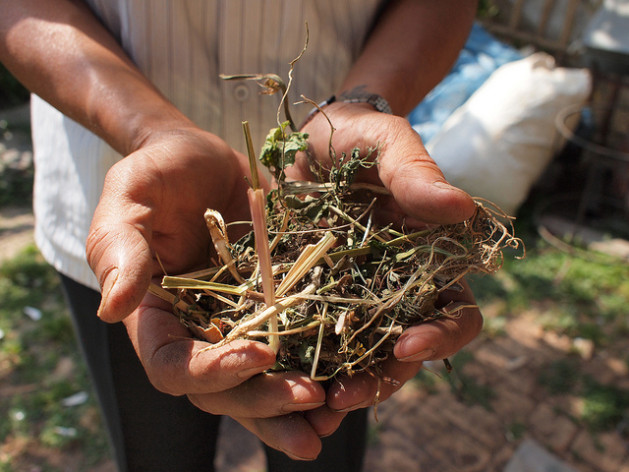 WASHINGTON, Jul 26 2013 (IPS) - Even as policymakers around the world wrestle with how to cut future emissions of global greenhouse gases, some scientists and environmentalists are increasingly turning their attention to the carbon dioxide that is already in the atmosphere, trying to discern ways that this level can be efficiently and safely brought down.

Amidst a burgeoning crop of innovative, even outlandish ideas is one that looks back to an ancient agricultural technique known as biochar. This is a fertilisation practice that involves making charcoal out of a previous year’s crops and mixing that into the soil to nourish the subsequent year’s fields – in the process secreting that plant’s carbon away from the atmosphere.

“People in developing countries are often constrained by poor soils, those that are acidic or poor in nutrients, and that’s where the addition of biochar tends to show the largest increase in growth rates.” -- Thayer Tomlinson of the International Biochar Initiative

In May, a U.S. science station announced that, for the first time, atmospheric concentrations of carbon dioxide had surpassed 400 parts per million (ppm). Climate scientists have been warning for years that levels beyond 350 ppm would bring about a “tipping point” of accelerating polar ice melt, rising global temperatures and extreme weather.

“We need a paradigm shift in our approach to climate, to really change how we look at what a solution means – most of the discussion is not only focused on the energy sector but on ongoing emissions,” Mark Hertsgaard, a writer who has focused on climate issues for the past two decades, told a Washington audience Thursday.

Hertsgaard points to a recent United Nations report that found the decade prior to 2010 experienced a historically unprecedented number of “extreme weather events”. Even if all new emissions were suddenly halted, he notes, scientists suggest that global temperatures would continue to rise for at least another three decades.

Yet according to a growing number of soil researchers, climate scientists and others, biochar could offer an opportunity to reduce those pre-existing global levels of carbon dioxide.

Through photosynthesis, all plants naturally take carbon dioxide out of the air as an integral part of their own life cycle. Under normal circumstances that carbon would then be re-released into the atmosphere when the plant dies and decomposes, but the idea behind biochar is to consolidate that carbon in a solid form that can be placed beneath the ground – and hence out of the atmosphere, at least for a certain period.

The central part of the process is to burn the plant – perhaps crops after they have died, perhaps trees that have died from an infestation, or perhaps something planted specifically for the purpose – in a low-oxygen fire, and convert it to charcoal. The resulting “biochar” can then be used as a high-potency fertiliser, offering benefits for both the farmer and the broader fight against climate change.

According to estimates done by Johannes Lehmann, a Cornell University agricultural science researcher, the world would be able to fully offset its annual greenhouse gas emissions if biochar were to be added to around 10 percent of existing agricultural fields.

That’s the idea, anyway. Thus far, even for those who view the science as relatively solid, the potential to significantly scale up biochar use internationally remains far off.

“Many questions remain, but the key here is that we need to broaden our gaze to make agriculture central to the discussion on climate change,” Hertsgaard says. “In theory, biochar could be a means of turning back the clock on climate. Certainly agriculture could be a crucial part of the solution to dialling back the problem.”

Thus far, funding and policy support for biochar have been uneven, although there is clear government interest in the United States and the European Union.

The U.S. Department of Agriculture has perhaps shown the greatest institutional interest to date, financing a regular series of small grants for continued research into biochar, particularly at universities. Yet while attempts have been made in the U.S. Congress to secure funding in major agricultural legislation, these have not yet been successful.

Internationally, the United Nations, World Bank and USAID, the United States’ foreign policy arm, have likewise fostered and studied a series of projects, but observers suggest that most donors are still adopting a wait-and-see approach. There are currently several dozen small-scale and pilot projects going forward in developing countries, however, most notably in India.

Indeed, while the international climate discussion offers a tantalising if still remote potential for biochar, the food security needs of developing countries today constitute the most tangible opportunity for this approach. A host of simple, low-cost designs are now available for creating biochar, most of which are fashioned out of simple 55-gallon drums.

“People in developing countries are often constrained by poor soils, those that are acidic or poor in nutrients, and that’s where the addition of biochar tends to show the largest increase in growth rates,” Thayer Tomlinson, communications director for the International Biochar Initiative (the IBI, which has a wealth of domestic and international data here), a U.S.-based advocacy group, told IPS.

“Part of the importance here is that communities can use agricultural residue, rather than firewood or cordwood, and convert that into useful products. These significant soil benefits can be provided without cutting down forests, without depending as heavily on commercial fertilisers, and simply using products that could otherwise be discarded.”

The IBI has been around since 2007, and Tomlinson says during that time interest in biochar has built noticeably, from industry, entrepreneurs, development experts and others.

“Watching the bibliographic references to biochar, there have been huge increases on a year-to-year basis,” she says. “This issue tends to span several interest groups – agriculture, energy, climate change – so it’s been difficult to find a true agency ‘home’, but there is clearly building commercial interest.”

Meanwhile, the industry is working to standardise the burgeoning sector’s products. Last year, the IBI came out with initial standards for defining biochar, and two months ago it unveiled a new certification programme for North American producers.

In April, the group submitted a “carbon offset” protocol to U.S. regulators, aimed at quantifying how much carbon is in biochar and the emissions that its use would counterbalance. That submission is currently open to public comment.