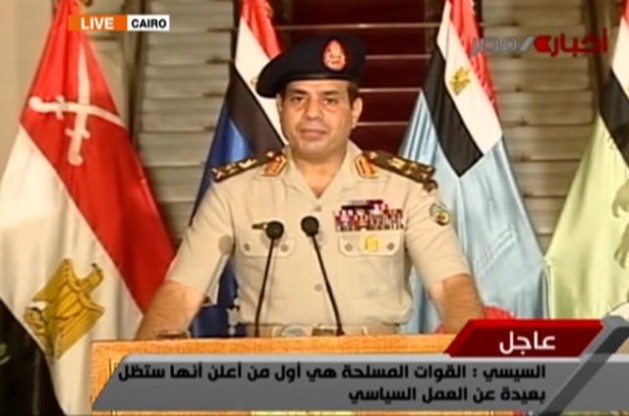 QATAR, Jul 3 2013 - The Egyptian army has overthrown President Mohamed Morsi, announcing a roadmap for the country’s political future that will be implemented by a national reconciliation committee.

Morsi’s presidential Facebook page quoted the disposed president as saying he rejected the army statement as a military coup.

Sisi called for presidential and parliamentary elections, a panel to review the constitution and a national reconciliation committee that would include youth movements. He said the roadmap had been agreed by a range of political groups.

Speaking shortly after al-Sisi’s announcement, liberal opposition leader Mohamed ElBaradei said the 2011 revolution that ousted Hosni Mubarak was relaunched and that the roadmap meets the demand of the protesters for early presidential elections.

Ahmed al-Tayeb, Grand Sheikh of Al-Azhar, Cairo’s ancient seat of Muslim learning, and Pope Tawadros, the head of the Coptic Church, both made brief statements following the announcement by the head of the armed forces.

Tawadros said the plan offered a political vision and would ensure security for all Egyptians, about 10 percent of whom are Christian.