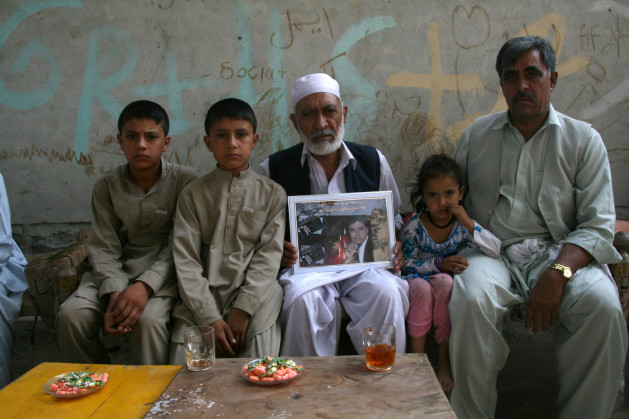 Malim Said Agha, Dagrwal Khan Agha and his sons with a picture of Asadullah killed in a NATO strike. Credit: Giuliano Battiston/IPS.

According to the firsts ISAF-NATO reports, the five were “enemy forces”, “insurgents”, killed with a “precision strike”. According to the white banner overlooking their graves, they are “martyrs”: innocent people killed by error.

Wasihullah and Amanullah were brothers. They used to live in a house not far from the cemetery in Saracha village in the district of Beshud at the door of Jalalabad, the main city in the eastern province of Nangarhar. Their father, Qasim Hazrat Khan, shows IPS the place where they were killed, just behind his house.

“Give us the pilots of the two helicopters. We will handle them according to our culture, to the Holy Quran and to what the Hadith prescribes. Then, we will give them back to the U.S., saying ‘we are very sorry’, as they did with us.”

Amanullah was about 21 years old (civil registries here are not common), and had a wife and three daughters. Khan produces a card showing that Amanullah was working for the Afghan government forces since March this year.

His brother Wasihullah was 10 years old, a student in fifth class in Samarkheel’s high school, not far from Saracha. Friday evening they were with Sahebullah, 14, who “was an apprentice in a metalworkers shop in Jalalabad,” his brother Nader Shah, 35, told IPS.

Asadullah Delsos and Gul Nabi were the other two boys with them. Asadullah, “a 14-year-old boy, was still waiting to have his first whiskers,” said Khan. Gul Nabi “was a 15-year-old boy, whose family comes from Pachir in Khogyani district. He worked as a carpenter in Kabul, but he used to come here whenever his parents needed his help.”

Khan said the five boys were sitting in the open space behind his house “after they went hunting for birds with badì (air guns).” Around 10 pm he heard “the first of three long-lasting shooting-sequences. When it stopped, I reached the roof and saw at least two helicopters and, far from here, some planes without pilots.”

When the shooting started again, he waited inside the house until he heard someone screaming: “Brother, your kids have been killed.”

He came out and tried to reach them, he said, “but the American soldiers told me to keep away.” The bodies were carried to the main Jalalabad hospital “only at 1.40 am,” said Nader Shah. “We were able to have them back in our hands after 2.30 am.”

Early Saturday morning Asadullah’s father Dagarwal Khan Agha, a logistics officer in the city jail, received a call. He had thought his son was sleeping in his parents’ house in Saracha. “They said I had to go to the hospital. Once there, I was told my son was in the morgue.”

The elder brother of Dagarwal Khan Agha, Malim Said Agha, still cannot understand “how those young boys could be confused with insurgents. They were just kids. The Americans killed innocent people. This was confirmed by the Afghan authorities,” he told IPS.

Ahmad Zia Abdulzai, spokesperson for the governor of Nangarhar province, told IPS by phone: “The Nangarhar deputy governor, Mohammed Hanif Gardiwal, sent an envoy to Beshud, together with an envoy sent by President Hamid Karzai: their inquiry states the five boys had no links with insurgency.”

ISAF-NATO have not yet publicly admitted the airstrike was an error. Contacted by IPS, Lieutenant-Colonel Will Griffin, chief of the press desk at the headquarters of ISAF Public Affairs, said “the incident is still under investigation. It would be inappropriate to comment at this time.”

According to the victims’ families, ISAF-NATO representatives acknowledged the mistake privately. “One of the foreign commanders of the Jalalabad airfield invited me to his office on Tuesday Oct. 8. He accepted the error and apologised for it. The same happened the day after at the governor’s palace,” Khan told IPS.

The meeting on Wednesday Oct. 9 was confirmed to IPS by Ahmad Zia Abdulzai, spokesperson for the governor of Nangarhar. Former Nangarhar governor Gul Agha Sherzai (he resigned a couple of weeks ago to run for the next presidential elections), his deputy Mohammed Hanif Gardiwal, several representatives of the Afghan security forces, including Colonel Sahib Khan, head of security in Beshud district and General Abdul Rahman from Kabul, a representative of the interior ministry, took part in the meeting.

In addition there were some tribal leaders, the relatives of the five killed boys and “two foreign envoys”, whose name is not known. “The two Americans apologised, admitting they have killed innocent people,” Agha told IPS.

“In front of all the participants they said they made an error,” said Khan. Abdulzai said “the Americans offered their apology in front of the victims’ families and Nangarhar’s authorities.”

All the victims’ relatives this IPS correspondent met said they had received some offers from the “foreign envoys” as a form of ‘compensation’.

“The Americans said they would help us, now and in future,” said Agha. “They did not offer any amount of money, but when we left the palace we found some cars with sacks of food. We all agreed to refuse that offer: we are poor but we do not sell our own blood.”

“Our request is clear,” Khan told IPS. “Give us the pilots of the two helicopters. We will handle them according to our culture, to the Holy Quran and to what the Hadith prescribes. Then, we will give them back to the U.S., saying ‘we are very sorry’, as they did with us.”

“Over the past years the Americans have killed many innocent people, also children and women,” said Agha. “They just say ‘we apologise’. It’s time for them to be accountable for their wrong actions.”