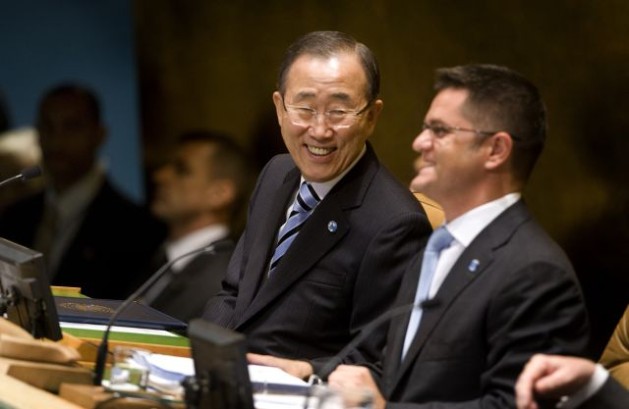 UNITED NATIONS, Oct 8 2013 (IPS) - Despite adopting scores of pious resolutions on gender empowerment over the last 67 years, the 193-member General Assembly has failed to practice in its own backyard what it has vigourously preached to the outside world.

So far, the U.N’s highest policy making body has elected only three women as its president since 1946: Vijaya Lakshmi Pandit of India (1953), Angie Brooks of Liberia (1969) and Sheikha Haya Rasheed al-Khalifa of Bahrain (2006).

"It is a pity that the U.N. has kept 50 percent of humanity out of consideration for its highest position." -- Ambassador Anwarul K. Chowdhury

In a letter addressed to over 160 world leaders, who were at the United Nations last week, the New York-based Impact Leadership 21 has called for meaningful steps in establishing “the rights of women and the equality of their participation at all decision-making levels”.

More specifically, the letter makes a strong case for a woman as the next U.N. secretary-general (UNSG) when Ban Ki-moon finishes his current term at the end of 2016.

Ambassador Anwarul K. Chowdhury, a former permanent representative of Bangladesh to the United Nations and a onetime U.N. under-secretary-general, told IPS the most important “reform” needed for the choice of the U.N. leader is in the mindset of member-states.

At this point of time in human progress, he said, it is a shame that in the 69 years of its existence, the United Nations was not able to elect a woman to lead.

Not only that, there has been no candidate even nominated to be considered for election, he complained.

“Notwithstanding all the U.N. resolutions, treaties, declarations and pronouncements asserting the equality of women, it is a pity that the U.N. has kept 50 percent of humanity out of consideration for its highest position,” he added.

The organisation is undoubtedly poorer as it restricted its choice only to the half of the potential candidates, said Chowdhury, a member of the Global Advisory Council of Impact Leadership 21, described as a movement and a platform committed to transforming women’s global leadership at the highest level of influence in the 21st century.

Yasmeen Hassan, global director of Equality Now, told IPS her organisation has been advocating for a woman UNSG since 1996.

“We started an action in 2011 but Ban Ki-moon was very quickly re-elected for a second term,” she said. “In fact, a woman UNSG has been feasible and realistic since Eleanor Roosevelt played an essential role in the creation of the Universal Declaration of Human Rights in 1948.”

Encouraged by the newly-created U.N. Women, Impact Leadership 21 has urged world leaders to commit themselves and the countries they represent to work to achieve four objectives:

First, the appointment of a woman as the next UNSG, come January 2017.

Second, the nomination and election of women as future presidents of the General Assembly.

Third, the election of more women as heads of various U.N. governing bodies (which have been led mostly by men).

And fourth, the appointment by member-states of more women as ambassadors to the United Nations in New York and to U.N. missions in Geneva.

Chowdhury told IPS that without peace, development is impossible, and without development peace is not achievable.

“But without women, neither peace nor development is possible,” he added. “We should never forget that when women are marginalised, there is little chance for the world to get sustainable peace in the real sense.”

Barbara Crossette, a former U.N. bureau chief for the New York Times (1994-2001), told IPS the time is overdue for a female secretary-general and very long overdue for more women as General Assembly presidents.

“But the choice should not be made on that ground: finding a woman. They are out there – good ones – but that doesn’t mean a good one would be chosen under the current system, and if the job criterion seems token,” said Crossette, a longtime chief correspondent for the New York Times covering Southeast and South Asia.

She also pointed out that countries will always have different ideas about what kind of UNSG they want, “and I think that is important to remember”.

“But this choice should not forever be made under the table, behind closed doors,” she added.

And that includes the gambit of claiming geographic distribution or rotation and then naming someone less than the best they have to offer.

“If the best people – both men and women – were to compete in some way openly [such as] a debate before the General Assembly, the whole world would get a chance to think about this. It would also draw huge attention to the U.N.,” she noted.

Crossette said when Louise Frechette of Canada was deputy secretary-general, “She told me once how painful it was to see governments not take her seriously in nominating stellar women for good U.N. jobs when she asked them for names.”

And many government never even answered her request, Crossette said.

Chowdhury told IPS the United Nations has been in the forefront of a continuing endeavour for equality since its inception.

The U.N.’s last women’s summit held in Beijing in 1995 made the boldest and most forward-looking call for equality.

The landmark 1325 U.N. Security Council resolution in 2000 on women and peace and security has made the realisation of women’s equal participation at all decision making levels obligatory on all members of the United Nations.

Hassan of Equality Now said it has always advocated for Security Council members to develop a fair process that seriously considers women candidates, as well as encouraging people to put pressure on their own country’s mission to the United Nations.

“By any standards, there are many women who are qualified for the post and it is past time for the U.N. to live up to its rhetoric on gender equality by electing a woman as UNSG,” she said.