‘Business Is Business, Moses Is Moses’ 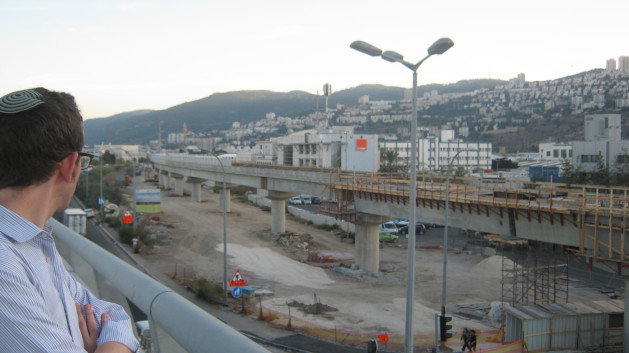 HAIFA, Northern Israel, Nov 27 2013 (IPS) - As civil war paralyses Syria’s transit routes and political flux in Egypt may affect security at the Suez Canal, Israel is busy repositioning itself as a transhipment hub and trade gateway to the Middle East.

With the government initiating massive infrastructure reform, Israeli businesses are hoping it will spur commerce with the Arab world, a region with which it remains at odds diplomatically and politically.

A ministerial committee last month approved one of Israel’s most expensive transportation projects – a passenger and freight railroad linking Eilat port on the Red Sea coast to the Mediterranean seaport of Ashdod.

The transportation ministry and Israel Ports Company officials see it as a Europe-Asia ‘land bridge’ alternative to the Suez Canal.

Fogel envisions a modern version of the ancient Silk Road – transforming Haifa into a regional cargo trade hub for East and West.

The construction of one or two privately-owned container terminals, as part of expansion plans for the Haifa and Ashdod seaports at a projected cost of a billion dollars each, is also expected to be approved this month.

Accounting for over 98 percent of Israel’s foreign traffic, its three trade seaports are the lifeblood of its economy. Haifa is the leading port with steadily growing cargo traffic – mainly containers, distillates, grain and chemicals.

Freshly voted in for a third term in office, Haifa Mayor Yona Yahav is busy lobbying the Israeli government to choose his city as the location for the planned terminal.

“Companies prefer to supply neighbours through our port because of its location – Haifa is at the centre,” the mayor said in a message to international port operators.

The idea is to project Haifa as a sea of stability in a volatile region.

Though world trade is highly dependent on the Suez Canal, the sea route via the canal to the Jordanian Red Sea port of Aqaba and further east around the Arabian Peninsula to the Gulf States, is onerous and long – at 1,260 km – compared to the shorter path connecting Haifa to, say, Iraq – at 930 km.

Shlomi Fogel, the CEO of Israel Shipyards Port (ISP) in Haifa and a confidant of Prime Minister Benjamin Netanyahu, has business ventures and ties in Arab states with which Israel doesn’t have diplomatic relations.

Fogel envisions a modern version of the ancient Silk Road – transforming Haifa into a regional cargo trade hub for East and West and repositioning it, at least in some measure, as a transhipment and logistics alternative.

“If, god forbid, a jihadist missile hits a ship crossing the Suez Canal, extraction will take six to 12 months,” argues Fogel. “We must ready ourselves to take advantage of the unstable situation by opening an alternative route to transport cargo from Haifa eastward.”

“Haifa and the Eilat-Ashdod railroad are alternatives, but not simple ones,” cautions Yehuda Hayut, a ports, shipping and intermodal transport consultant. “We’d have to redefine our seaports on a completely different scale. This won’t happen.”

Notwithstanding misgivings about competing with the Suez Canal, Haifa is already trying to meet the challenge.

Hinterland access roads have been spruced up. A 67-km railroad already under construction will connect Haifa and the Israel-Jordan border for a new container terminal.

In the past seven months, 6,000 trucks – mostly Turkish, Jordanian and Israeli – have commuted back and forth between Haifa and Jordan via the Sheikh Hussein border crossing.

Established in 2002 in Jordan across the border with Israel as a peace dividend for both countries, the jointly managed Jordan Gateway Industrial Park (JGIP) aspires to operate as a logistics hub. Currently, only 30-50 trucks pass through the park on any given day.

In keeping with the park’s main objective of facilitating transportation of products and commodities to and from Europe, the Middle East and Asia, a new Jordan River bridge is planned in addition to the Sheikh Hussein Bridge. JGIP operates as a free trade zone.

JGIP’s Jordanian General Manager Qassem a-Tbaishi says, “It serves as an inspiration for other Arab countries by setting a model of regional economic cooperation and enhances the Jordanian economy by attracting foreign investments and providing employment opportunities for the local population.”

Take, for instance, Gur Filter, an Israeli manufacturer of automotive filters that was relocated to the Jordan Gateway as Irbid Filter in 2009. The factory employs 40 Jordanian workers, mostly women.

Five percent of the 3,500 or so different types of gas, oil, fuel, air and car filters, either developed in Israel, imported from China or produced and packed at the Jordan Gateway, is exported to the Arab world from there.

The company’s Israeli CEO Yoram Bental says he has “visited Saudi Arabia, Bahrain, Abu Dhabi, Dubai. Our brand name is Gur Filter, but in Arab countries, it’s Irbid Filter. They know we sell an Israeli product, but politically – ‘siyassi’ as they say – it’s underground. Nobody talks about it.”

It’s business, divorced from religion and politics. As Fogel, who is involved in the Jordan Gateway, says, “Business is business, Moses is Moses.”

In the absence of a clear ‘made-in-Israel’ peace vision, the word he stresses is “economic peace”.