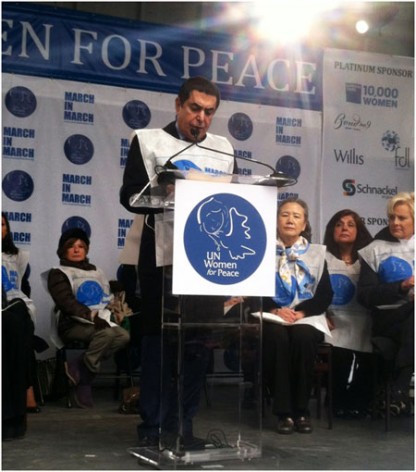 UNITED NATIONS, Mar 7 2014 (IPS) - In its continued effort to highlight the achievements of women, United Nations Women for Peace (UNWFP), in partnership with United Nations Alliance of Civilization (UNAOC), convened Friday the ‘March in March’, an annual awards luncheon and rally to celebrate International Women’s Day.

“The issue of “the woman” is one that is inherently close to the work of the UN Alliance of Civilization. It is not just a women’s rights issue, but a humanitarian one as well.” said Al-Nasser.

Addressing the need to bring men and boys to the table to discuss violence against women, Al-Nasser also noted that education plays an effective role, especially if started at an early age, adding, “We have to teach young boys and educate them that they should raise their voices against this crime. If we don’t change attitudes and perceptions, this crime will continue to happen.”

UNWFP points out that one in five women under the age of 15 are sexually abused, most often by a family member, and in some countries, nearly seven out of 10 women are beaten, raped or mutilated.

Having the conversation about sexual violence and supporting victims is still a work in progress for the global community. Victims still keep quiet for fear of more violence or even death, and without proper resources local organizations and even governments struggle to meet the needs of affected women.

Playing its part in strengthening the implementation of laws and policies on violence against women, and also to provide services to survivors, the UN Trust Fund to End Violence Against Women was established in 1996 by the General Assembly and since 2012, supported by UNWFP.

Emphasizing the need for “mutual respect among nations and people” of different diversities in order to break down the walls of gender inequality that often lead to violence against women, Al-Nasser applauded the work of UNWFP for its ability to provide economic and social opportunities for women that ultimately helped create a life of dignity.

“Our rights, our lives, our dignity, should not be dictated by any of these diversities—including gender.” Al-Nassar said during his closing remarks.

UNWFP was founded in 2008 under patronage of Ban Soon-Taek, wife of UN Secretary-General Ban Ki-moon and focuses on supporting the goals of UN agencies whose missions elevate women through cultural, educational and social programs while engaging in a global peace building process.