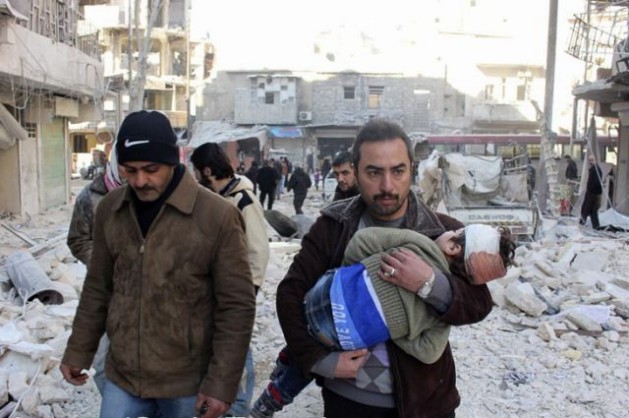 UNITED NATIONS, Mar 17 2015 (IPS) - As the long drawn-out Syrian military conflict passed a four-year milestone over the weekend, the New York-based Global Centre for the Responsibility to Protect (R2P) summed it up in a striking headline: 4 years, 4 vetoes, 220,000 dead.

It was a harsh judgment of the 15-member Security Council, the most powerful political body at the United Nations, which critics say is desperately in need of a resurrection.

"Those states who have vetoed resolutions aimed at ending atrocities in Syria will be judged very harshly by history." -- Dr. Simon Adams

The devastating civil war and the sectarian violence in Syria have also displaced over 11 million people – more than half of Syria’s population – with 12 million in need of humanitarian assistance.

Dr. Simon Adams, executive director of the Global Centre for R2P, told IPS Syria is clearly the most tragic failure of the U.N. Security Council in a generation.

“Each veto and the inaction of the Council has been interpreted as a license to kill by atrocity perpetrators in Syria,” he added.

The four vetoes, cast by Russia and China to protect the beleaguered government of Syrian President Bashar al Assad, were cast in October 2011, February 2012, July 2012 and May 2014.

Dr. Adams said 220,000 dead is a horrifying indictment of the magnitude of the Security Council’s failure in Syria. “They constitute 220,000 reasons why we need reform of the veto rights of the five permanent members when it comes to mass atrocity crimes.”

The five (P-5) holding veto powers are the United States, Britain, France, China and Russia – and each of them has exercised the veto mostly to protect their close allies or their national interests over the years.

Since the creation of the United Nations 70 years ago, the two big powers have cast the most number of vetoes: a total of 79 by the United States and 11 by the Russian Federation (plus 90 by its predecessor, the Union of Soviet Socialist Republics or USSR), while China’s tally is nine, according to the latest available figures.

“The veto costs lives. Those states who have vetoed resolutions aimed at ending atrocities in Syria will be judged very harshly by history. They have a responsibility to protect and a responsibility not to veto,” Dr. Adams said.

Secretary-General Ban Ki-moon, who has consistently called for a political solution, said the Syrian people feel increasingly abandoned by the world as they enter the fifth year of the war that has torn their country apart.

They and their neighbours, he said, continue to suffer under the eyes of an international community that is divided and incapable of taking collective action to stop the killing and destruction.

Retracing the violent history of the ongoing conflict, Ban recalled that it began in March 2011, when thousands of Syrian civilians went to the streets peacefully calling for political reform.

But this legitimate demand was met with a violent response from the Syrian authorities. Over time, civilians took up arms in response, regional powers became involved and radical groups gained a foothold, he added.

In what appeared to be a diplomatic turnaround, U.S. Secretary of State John Kerry has not ruled out a political solution to the Syrian civil war.

“We are working very hard with other interested parties to see if we can reignite a diplomatic outcome,” he said during a television interview Sunday, although the U.S. has been supporting rebel forces trying to overthrow the Assad regime by military means.

Angelina Jolie Pitt, a Hollywood celebrity and Special Envoy for the U.N. High Commissioner for Refugees (UNHCR) said: “People are entitled to feel bewildered and angry that the U.N. Security Council seems unable to respond to the worst crisis of the 21st century.”

She said it is shameful that even the basic demand for full humanitarian access has not been met.

Meanwhile, neighbouring countries and international humanitarian agencies are being stretched beyond their limits.

“And it is sickening that crimes are being committed against the Syrian people on a daily basis with impunity. The failure to end this crisis diminishes all of us,” Jolie declared.

Ban said the lack of accountability in Syria has led to an exponential rise in war crimes, crimes against humanity and other human rights violations.

Each day, he said, brings reports of fresh horrors: executions, widespread arbitrary arrests, abductions and disappearances as well as systematic torture in detention; indiscriminate bombardment of civilian areas, including with barrel bombs; siege and starvation tactics; use of chemical weapons, and atrocities committed by Daesh (the Islamic State) and other extremist groups.

Dr. Adams told IPS President Assad and all atrocity perpetrators in Syria belong in handcuffs at the International Criminal Court (ICC) in The Hague.

“The U.N. Security Council has failed to end a conflict that has already cost 220,000 lives, but the least they can do now is refer the situation to the ICC so that victims have some chance of justice,” he said.