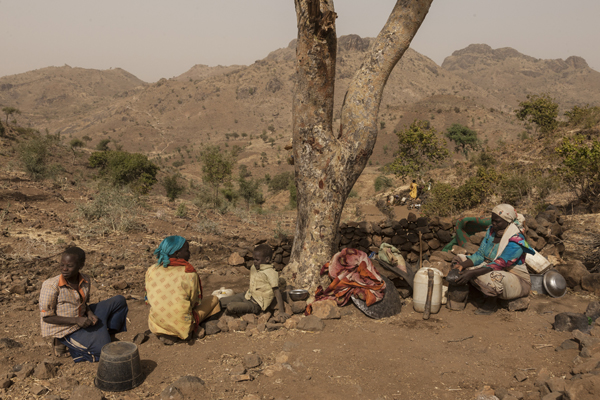 UNITED NATIONS, Sep 21 2015 (IPS) - The Rapid Support Forces (RSF), a Sudanese government force formed in mid-2013 and aimed at fighting rebel factions across Sudan, has allegedly not only committed war crimes, but serious crimes against humanity in Darfur.

A comprehensive report on the true magnitude of RSF attacks can hardly be provided, due to the inaccessibility of the region and lack of reliable data. Nevertheless, Human Rights Watch (HRW) has managed to interview 212 eyewitnesses who were either victims of RSF attacks or could otherwise testify the brutality of this government force.

“When an attack happens I call the people I know in that area and see if they can help locate people who were displaced by that attack and then try to get a phone to them or, how we got most of the people, was going and talking to the people in refugee camps,” Jonathan Loeb, Fellow at the Africa Division of HRW, told IPS.

In ‘Men With No Mercy’, HRW provides evidence that RSF attacks against civilians carried out between May 2014 and July 2015 were widespread and systematic, resulting in forced displacements, torture, extra-juridical killings, mass rapes and destruction of infrastructure crimes of universal jurisdiction, for which all states are responsible.

A mother from Bardani describes how she was raped by RSF soldiers: “They separated out the girls. When they finished raping the girls they raped all of us. [Each of us was raped] by two people. About 100 of us were raped. My daughters are 18, 12 and 8. They beat all the men.”

“Everything was destroyed. There were just bodies and burned houses left. We, the women, we started burying the bodies. Sometimes we found one arm or one leg. We just buried them. I buried five complete bodies and many incomplete bodies. […] After the burial we gathered children and we left in groups. We put the children on donkeys and walked for five days to [the town of] Um Baru,” Zeinab, a 25-year-old woman from Birdik, told HRW.

According to the report, the vast majority of attacked villages had no rebel presence before the RSF arrived.

Omar, a defector from a Sudanese state force, told HRW: “What I saw the army doing, I did not accept it. They raped women and killed civilians. They said that we were fighting the movements but we never went to the movement areas.”

RSF members told HRW that they were ordered to commit crimes like mass rapes and Sudan’s vice president Hassabo Mohammed Abdel Rahman ordered RSF personnel to kill everyone living in the rebel areas near Jebel Marra.

“They asked us where the rebels were. We said we didn’t know. [I saw two men get] killed. They were shot by small boys,” a herder from Um Daraba told HRW: “

Most RSF members are Darfurians recruited by Hemeti, a former Border Guard commander and Janjaweed militia leader. Many soldiers were drawn from the Border Guards. The RSF is considered a well-equipped force of at least 5,000 to 6,000 troops with 600 to 750 vehicles. Eyewitnesses told HRW that RSF troops can be recognized by the colour of their vehicles and RSF logos.

The conflict in Sudan has been going on for 12 years and is one of the most serious of its kind the world over. Darfur, located in Western Sudan near the border to Chad, is among the poorest and most inaccessible regions in the world. The denial of access through the Sudanese government makes it difficult for U.N. peacekeepers and aid workers to reach affected villages in Darfur.

“The Mission has repeatedly called to grant immediate and unfettered access in areas of on-going or recently concluded hostilities between government forces and rebel factions, including to the Jebel Marra area,” U.N. spokesperson Farhan Haq said in a statement with regard to the UNAMID mission.

“The work of UNAMID’s human rights component has also been seriously curtailed ever since the Mission called on the Government of Sudan to grant it access to Thabit, in North Darfur, to investigate allegations of rape.”

4.4 million people in Darfur need humanitarian assistance, while inaccessibility makes it hard to monitor the conflict and to prevent further attacks.

“From January 2015 till the present, the Mission has attempted to reach troubled areas in Central Darfur, including Golo, nine times – eight access denials and one patrol restriction were imposed by both parties [government forces and rebel factions] to the on-going conflict. As of now, UNAMID has not been able to obtain access to Golo and, therefore, is unable to verify, first-hand, the content of any such reports on the area,” UNAMID Spokesperson Ashraf Eissa told IPS.

Due to the systematic nature of attacks against civilians, governments and institutions that fail to take action have a responsibility when it comes to solving the conflict. HRW provides specific recommendations on how to prevent new abuses by the RSF during the upcoming dry period, which will start around the turn of the year 2015/16 to the Sudanese government, the U.N., UNAMID, the EU and its member states, as well as other institutions.

The Sudanese ambassador on the other hand criticizes HRW for accusing the RSF, which is considered as one of the best tools to fight rebels from Sudan’s point of view.

China and Russia have blocked possible action on this issue at the Security Council so far, but knowledgeable sources consider a unified Security Council essential for solving this conflict and building political pressure on the government of Sudan. Governments and international organizations, they say, should be more vocal about convincing the two countries to enable action, push Sudan to conduct the important step of banning the RSF and to investigate any form of abuse pro-actively.

The Sudanese government, they say, has the power to disband this force, which was created by them in the first place. However, there is a collective responsibility when it comes to solving this conflict.
(End)