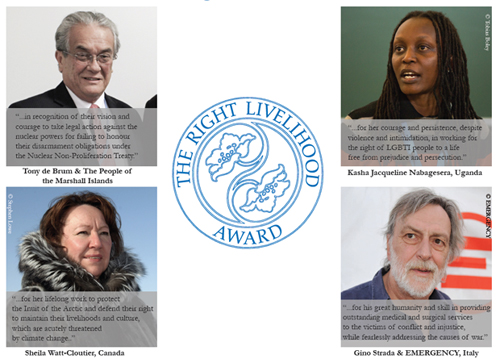 Ole von Uexkull said: “This year’s Right Livelihood Laureates stand up for our basic rights –be it the rights of indigenous peoples or lesbian, gay, bisexual, transgender and intersex (LGBTI) communities, or the right of all citizens to live in a world free from the scourges of war and climate chaos.

With their tireless work, on the frontlines and in courts, the Laureates uphold the values that led to the creation of the United Nations seventy years ago.
In this year of global humanitarian crises, they provide an inspiring response to the defining challenges of our time.”

This year’s Award goes to a Pacific island state foreign minister, who has challenged the world’s nuclear powers through unprecedented legal action; to an indigenous leader who fights to protect the Arctic in the face of climate change; to a Ugandan human rights activist working against the discrimination of LGBTI communities in Africa; and an Italian doctor who has saved countless lives in war-torn countries are this year’s Laureates of the Right Livelihood Award, widely known as the ‘Alternative Nobel Prize’.

The Right Livelihood Award, widely known as the “Alternative Nobel Prize”, recognises the most inspiring and remarkable work of those who strive to meet the human challenges of today’s world, such as environmental, health, human rights and/or social justice. The work of those people, teachers, doctors, farmers, or simply, concerned citizens, becomes a holistic response in line with their struggle for a better future.

For the first time in the history of The Right Livelihood Award, the Award goes to Laureates from Italy and Uganda.

Gino Strada and his organization, Emergency, received the award for their “for his great humanity and skill in providing outstanding medical and surgical services to the victims of conflict and injustice, while fearlessly addressing the causes of war.” They contributed to provide medical assistance to the victims of conflict in countries such as Afghanistan and Sudan.

Kasha Jacqueline Nabagesera was awarded “for her courage and persistence, despite violence and intimidation, in working for the right of LGBTI people to a life free from prejudice and persecution.”

Tony De Brum, and the People of the Marshall Island, was recognised for “their vision and courage to take legal action against the nuclear powers for failing to honour their disarmament obligations under the Nuclear Non-Proliferation Treaty.”

Sheila Watt-Cloutier, a Canadian citizenship-environmental activist, was awarded “for her lifelong work to protect the Inuit of the Arctic and defend their right to maintain their livelihoods and culture, which are acutely threatened by climate change.”
(End)