When the Rains Came in Dokolo and Karamoja

DOKOLO, UGANDA, Nov 17 2015 (IPS) - Households in Northern Uganda are recovering from a prolonged dry spell which has devastated harvests and led to food shortages. Long-awaited rains are expected to replenish pastures, and communities are being encouraged to plant short-term crops. But those that can, fear losing their produce again, when the rains stop.

When the rains came, residents in Dokolo, northern Uganda were milling about in the city’s bustling centre. Drenched sellers were scrambling to pack their goods, whilst mothers strapped children to their backs and scurried to get them to shelter.

Charles Ochero was held up in rush hour traffic. The farmer’s wheels kept sinking into potholes on the red sandy road, the colour of flower pots. Sheets of rain pounded his car bonnet like a freight train. The intensity, was unexpected.

“The rains weren’t meant to come now,” the farmer gestured to the above downpour. “This is meant to be the dry season.”

Unpredictable rainfall in northern Uganda has unhinged agricultural calendars. “The whole harvest cycle has been turned upside down,” he continued in his calm baritone.

A few weeks ago, severe drought caused Charles’s premature maize crops to shrivel up. Now his beans are flooding. “There is a type of bean which is planted only when it’s dry. Now there’s too much rain, so even those beans have gone to waste. It’s a big problem,” he says.

Further east, in Karamoja, the moist air tumbles down in globules of quicksilver. Withered trees and shrubs from the prolonged dry spell lap up the long-awaited rains and swallow hard.

“The harvests have failed, but the rains have come…” rejoices Sean Granville Ross, country director of the NGO Mercy Corps. “There were concerns about the condition of livestock and the conditions of the grange lands, but now it’s raining, so all the livestock will be fine.” Ross eyes new opportunities in the greening countryside: “Now it’s a case of understanding how you enable those whose harvests have failed to get through the lean season.” 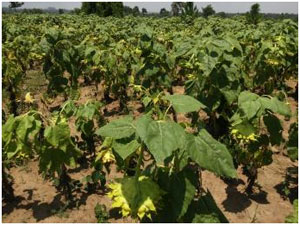 The food crisis in Karamoja had left 640,000 thousand people in desperate need of food aid in 31 out of 52 sub-counties. “People cultivated their lands but when it was time for harvesting, their crops never came,” reveals Israel Lawam, a community development officer for Moroto district, one of the worst affected areas. “The sun scorched them beyond redemption.”

At least seventeen people starved to death in September, according to official statistics. The government has since been channelling portions of cornflour and beans to stricken areas. “Too little too late,” according to Joseph Kinei, sub-county chief of Napak district. One of his family members died of hunger. “People have been pouring out in numbers to receive handouts, but many have gone back empty-handed.”

Meanwhile the rain continues to fall in this semi-arid region. The drops run down rows of maize on steep hills before draining into a nearby stream or river. With it goes the topsoil and vital nutrients contributing to silt. The farming technique of the Karamojong people, which consists in leaving fields bare, is increasingly under scrutiny.

“You’ll find communities trying to plant rice in wetlands,” decries Musa Francis Ecweru, Minister for Relief and Disaster Preparedness. “They clear away natural vegetation to plough farmland, which is destroying the environment.”

Compounded by cattle grazing, the main livelihood of the Karamojong, “they’re putting a strain on land resources,” he argues. A police officer was reported to have been swept away by floods in Moroto, after its river banks burst, likely because of silt.

“Communities need to change their agricultural practices,” insists Peter Odama, CEO of Uganda’s World Action Fund in Kampala. He says he often sees women and girls from Karamoja begging in the Capital because of food insecurity.

The government is encouraging households to take advantage of the enhanced rain fall to plant quick-maturing crops like vegetables. The World Food Programme points out most people have eaten those seeds due to the prolonged food shortage.

Karamoja’s food insecurity has led to other ironically self-defeating practices, like cutting down trees to sell as charcoal. Israel Lawam points out that many Karamojong people are cutting wood for commercial purposes, to be able to afford something as little as a cup of rice.

“This needs to be stopped and reversed,” argues Minister Ecweru, a vocal advocate of tree replanting. “Deserts are returning to Uganda”, he warns, and tarnishing what many describe as the Pearl of Africa. His critics however accuse the government of posturing in the run-up to next year’s presidential elections. 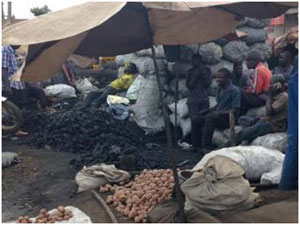 Back in Mercy Corps’ compound in Moroto, humanitarian coordinators welcome locals for training on resilience to climate change. One way is by limiting soil erosion.

Anna sprinkles water onto her small plot of greens. Her kitchen garden uses inputs such as straw to boost soil fertility and trap moisture. “Locals become less dependent on climatic shocks”, country director Sean Granville Ross explains. “Mulching [covering with straw] is something new to my life,” Anna says. “From the teachings I got, I was able to put up my own kitchen garden of vegetables and I intend to plant different varieties like okra and onions.”

Enhancing the Karamojong’s agricultural techniques, but also connecting farmers to markets, is the aim of Mercy Corps. That way, “they can trade livestock directly when there’s a new shock,” Ross adds.

Charles in Dokolo, yearns for such access to markets. Back in his farmhouse, he tends to a flock of chickens that he’s bought to supplement his crop farming. But food prices have gone up so much, he can’t afford chicken feed. “There are too many middlemen who bump up maize food prices,” he complains.

“I’d invested about 5 million shillings in the crops – that failed – I invested 15 million in the chickens – right now I have over 2,000, but feeding them is expensive.” The same concerns about livestock as the Karamojong.

Outside, the pitter patter of rain dances back and forth on his tin roof like a yoyo. The weather itself yoyos from sweltering heat and drought to incessant rains, in an anxious waltz. Uganda’s meteorological department predicts that the intense rains — linked to El Niño storms from the Pacific Ocean– could last up until February.

“The government wants us to plant now,” Charles says anxiously, “but what if the rains stop midway and the crops haven’t matured in time? We’ll be in a big mess,” confides the 71-year- old former prison guard, accustomed to strict timetables.

“If these rains continue up until February, then the planting season will also be disturbed because February is normally when the first season starts in this area,” he states.

If his crops fail, it will mean taking out a new loan from the bank “who want nothing more to hear about agriculture.” Charles shrugs and sighs heavily. “The weather changes are destroying everything. We’re just left at the mercy of God.”

This story was sourced through the Voices2Paris UNDP storytelling contest on climate change and developed thanks to Jonathan Groubert, @RNW