Displacement Climbs, No Respite Near in 2016 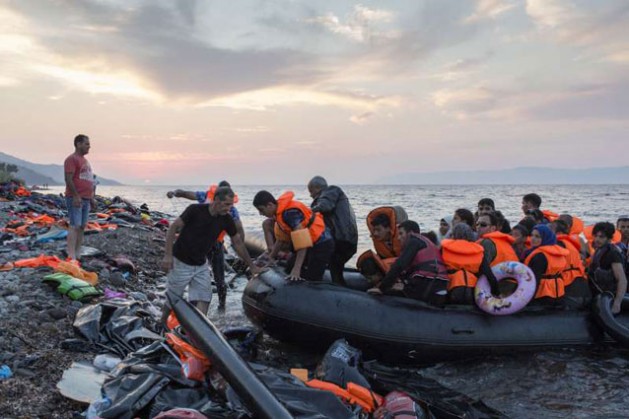 Thousands of refugees make the perilous journey each day for a better life in Europe and 2015 is set to be a record year for refugee numbers. Governments, Aid Organisations and NGO's struggle to help them. Credit: I.Pritchett/UNHCR

ROME, Dec 28 2015 (IPS) - Nearly a million people have crossed the Mediterranean as refugees and migrants so far this year, and conflicts in Syria and elsewhere continue to push up levels of human suffering. This makes 2015 likely to exceed all previous years of forced displacement, according to a new United Nations High Commission for Refugees report.

UNHCR’s Mid-Year Trends 2015 Report, referring to the period from January to end June, and looking at displacement across the globe from fighting and persecution, shows markers firmly in the red in each of the three major categories of displacement – Refugees, asylum-seekers, and internally displaced persons or those who must take refuge within their own countries.

The global refugee total, which a year ago was 19.5 million, had as of mid-2015 passed the 20 million threshold to 20.2 million for the first time since 1992, says UNHCR. Asylum applications were up 78 per cent to 993,600 over the same period in 2014. And the numbers of internally displaced people jumped by around 2 million to an estimated 34 million, the agency added in its report.

The staggering numbers from the first half of this year suggest that 2015 will see global forced displacement exceeding 60 million for the first time. Worldwide that means that one person in every 122 has been forced to flee their home.

“Forced displacement is now profoundly affecting our times. It touches the lives of millions of our fellow human beings – both those forced to flee and those who provide them with shelter and protection,” High Commissioner for Refugees António Guterres said in the report.

The International Organization for Migration said last week the number of migrants and refugees crossing into Europe by land and see this year illegally has hit the million mark.

This is four times the the total number from last from year.
Most crossed by sea, with more than 800,000 travelling from Turkey to Greece. Half are migrants from Syria.

Eleven more migrants drowned last week, adding to the IOM toll of 3,695 people this year dying or missing at sea.

Seven people last week were rescued by Turkish coast guards after the craft went down, apparently en route from Kusadasi in Turkey to the Greek island of Samos.

Beyond UNHCR’s startling numbers there are some indicators that show key areas are worsening. For instance, voluntary return rates…that is people who feel they can return home safely are down and at the lowest level in three decades. The agency uses this as a barometer of the global state of conflict. For example, a year ago 107,000 people wanted to voluntarily return as compared to 84,000 this year in the same period.

Some 839,000 people in just six months fled, in real terms this means an average rate of almost 4,600 being forced to flee their countries every day, said UNHCR. The war in Syria and its effect on the region continues to be generating the most numbers of displaced people.

Pressures on host countries are growing. With infrastructures being stretched there is a great danger that resentment of refugees will increase and their situation become politicized. This is not a new consequence and can be a worrying trend. But too, the first half of 2015 was also marked by extraordinary generosity. Turkey is the world’s biggest hosting country with 1.84 million refugees on its territory as of 30 June.

Pope Francis appealed for peace and reconciliation in conflict zones around the world in his traditional Christmas Day message from Rome. He said he prayed for the success of recent UN resolutions for peace in Syria and Libya.

The Pope also cited the acts of terrorism in France, Lebanon, Egypt, Tunisia and Mali, which he condemned. Thousands flocked to St. Peter’s Square to see the address which the Pope makes every year to the city and is broadcast across the world.

Lebanon, a host to refugees for decades, still is a temporary home to more refugees in comparison to its small population. UNHCR counts there are 209 refugees per 1000 inhabitants in Lebanon. Ethiopia is hit most in the pocketbook as it pays most in relation to the size of its economy with 469 refugees for every dollar of GDP. In the end those carrying the responsibility for looking after and hosting refugees are those countries bordering conflict areas, and many are in developing countries.

But the numbers of people reaching Europe by boat via the Mediterranean is only partly reflected in the report mainly because the surge of people escalated in the second half of this year and are still outside the months this report covers. Still, in the first six months of 2015 Germany was the host of the newest asylum claims – 159,000, close to the entire total for all of 2014. The second largest host was the Russian Federation with 100,000 asylum claims, and those were people fleeing trouble in the Ukraine.