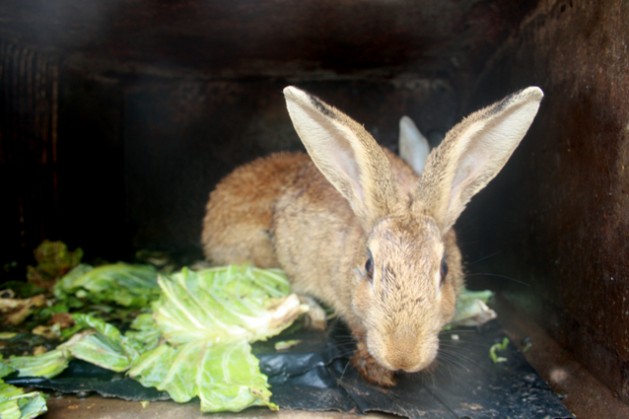 Hordes of ordinary Zimbabweans are turning to rabbit farming, which has continued to transform many lives economically. Pictured here are some of Tichaona Muzariri's rabbits, a villager from Chivhu, 143 kilometers south of Harare, the Zimbabwean capital. Credit: Jeffrey Moyo/IPS

CHIVHU, Zimbabwe, Feb 2 2016 (IPS) - Tichaona Muzariri, 44, a villager based at Range in Chivhu, a town 143 kilometers south of Harare, the Zimbabwean capital, quit his job as a teacher in 2009 to start a rabbit farm on a small scale with three does (female rabbits) and one buck (male). With around US$30 as capital, Muzariri waded into rabbit farming back then. Today, his rabbit farm breeds nearly 3,000 rabbits every year and slaughters up to 120 every week for sale to grocery stores, restaurants and hotels.

For Muzariri, rabbit farming has become the way to go, with one kilogram of rabbit meat retailing at approximately US$8 to $10 in Zimbabwe. “If I look back today I just can’t believe that it’s me who is making thousands of dollars from rabbit farming starting from a very humble beginning,” Muzariri told IPS.

On average, the price of a live rabbit from Muzariri’s farm is US$6. Business flourishes as the cost of raising it is only US$1 per month. “I can’t complain my brother; for me, this business is in the right trajectory as many people now find rabbit meat a delicacy they cannot do without,” Muzariri said. Consequently, many rabbit farmers like him are heavily cashing in on this business: a single doe gives birth to up to 40 kits (baby rabbits) in a single year while it takes just about 30 to 33 days for a pregnant doe to produce baby rabbits.

And thanks to rapid breeding, rabbit farming known as cuniculture is booming in Zimbabwe, with many farmers like Muzariri recognising gaps in the market for the supply of rabbit meat. According to the Rabbit Producers Association of Zimbabwe (RPAZ), there are over 2,000 rabbit farmers in this Southern African nation, with some keeping the rabbits in their backyards, small-scale and commercial farmers. RPAZ is an organisation that co-ordinates, administers and promotes both commercial and
domestic breeding, production and sale of rabbits while it also seeks to be the standard bearer with regards to breeding.

Not to be outdone, even women farmers here have joined the frenzy of rabbit farming with zest. Mavis Gono, 32, hailing from Marondera in Mashonaland East Province approximately 72 kilometers east of Harare, is one such woman, who against all odds has plunged into the male-dominated rabbit farming venture. “The rabbit meat I produce from my farm here attracts visitors from various places, including tourists, which has made my business grow at a faster pace,” Gono told IPS.

Based on assessments by local hoteliers here, hotels and big retail shops have turned out to be big buyers as rabbit meat is now in high demand owing to its delicacy and nutritious value. “We have of late accumulated a huge clientele base of rabbit meat lovers who are attracted to the nutritious value of the meat,” Gideon Humure, a Chivhu-based hotelier, told IPS. But it is also the fast growth of rabbits that has made them a ‘darling’of farmers here. According to RPAZ, after they are born, rabbits grow very fast and reach maturity and market size in less than six months.

On the other hand, as per findings by local agricultural experts, it is not only rabbit meat that is important. “People here also sell rabbit manure as fertiliser and as a worm-growing medium,” Agrippa Machingura, an agricultural extension officer in Harare, told IPS. Rabbit meat products are also said to harbour medicinal properties, with the meat imbued with a higher percentage of easily digestible protein while it also has the lowest fat and calories, and less sodium content and a high meat-bone ratio. The meat also has lower cholesterol, often known for causing heart problems.

After Muzariri and Gono ventured into rabbit farming, life has never been the same as they have moved from success to success. Muzariri said he now supplies thousands of rabbits to local restaurants in Harare and neighbouring towns. “People out there may not know, but rabbit farming has changed my life and thanks to demand for rabbit products, I’m now able to save more than US $900 every month and can afford to pay school fees for my children attending private schools,” said Muzariri.

Meanwhile, Gono has also managed to acquire a 12-acre property where she plans to establish a much larger rabbit farm just outside Harare. “I have nothing much to loose by rearing more and more rabbits as they survive under any climatic conditions even in our harsh climate here and they don’t demand too much and expensive feeding like chickens,” said Gono. She agrees with Trynos Gambiza, an animal husbandry expert based in Chivhu, who told IPS that “rabbit farming doesn’t require too much land space like other livestock and as such, rabbits are the ideal animals to raise anywhere even with little space. Raising rabbits also requires less labour unlike rearing cattle and poultry since rabbits are easy to feed and often don’t need a lot of attention.”

Rabbits also produce more meat from very little feeding. According to the Zimbabwe Game Hunters Association, a single rabbit can produce above 2kg of meat on the same feed and water that a cow produces 500g of meat on. With diseases like hypertension and high blood pressure taking center stage in Zimbabwe, rabbit farmers like Muzariri have apparently fostered answers to the mounting health challenges here. “The rabbits we rear have proven to be the panacea to lifestyle illnesses troubling many people nowadays,” Muzariri said.