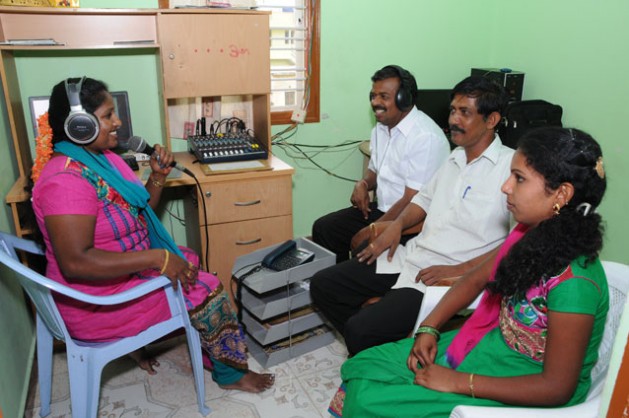 The team of Sarathi Jhalak at work. The station is one of the 200-odd Community Radio Stations across India. Credit: Sarathi Jhalak/IPS

Anugondanahalli, INDIA, Feb 13 2016 (IPS) - It is 8 am in Anugondanahalli village about 70 kms from India’s IT hub of Bengaluru, capital of the southern Indian state of Karnataka. A group of farmers are huddled around a radio set sipping hot tea and tuned in to Sarathi Jhalak, a local community radio station (CRS) broadcasting on FM 90.4. On air is a programme about climate change that has everybody hooked. Experts are sharing simple tips on how farmers can pro-actively minimise the impact of erratic weather on their crops.

“I have no knowledge about climate change,” says Ram Kutty, a 60-year-old farmer, “so it’s nice if experts can explain it to me in a simple language what it is and how I can protect my fields. Lack of planning in our work can mean the difference between penury and prosperity. That’s why community radio has become my best friend.”

Founded in 2012, Sarathi Jhalak is one of the 200-odd community radio stations across India, a nation of 1.25 billion which has 18 officially-recognised languages and 1,652 mother tongues. Apart from filling in a void left behind by national and regional media, such initiatives are also transforming lives in the hinterland. This form of participatory communication has also proved to be a successful tool for social and economic development at the grassroots level.

The CRS content is innovative as it addresses local concerns. It is also generated by locals and tailored to be fun and progressive as well. No wonder this avatar of radio sees participation from a diverse demographic — women, children, farmers, petty business men, lawyers and students.

“We try to highlight important issues which find a resonance our local population,” explains the founder of Sarathi Jhalak D.S. Shamantha, a media professional. “The thrust is on development issues and matters of public health, agriculture, folklore, legal matters and social welfare. We provide our target audience with information on all topics like any other mainstream radio but with a local flavour. Our segments on violence against women and children, health and education, agriculture and sexual harassment of women in the fields have got excellent feedback.”

New programmes at Sarathi Jhalak are designed as per listeners’ feedback and local needs. There are live broadcasts and recorded programmes daily put together by a dozen-odd radio jockeys (RJs) mostly women. Locals are motivated to participate and knowledge-sharing is encouraged. The radio station’s listeners have even formed a Listener’s Club to popularise the network and its programmes.

Far away from Anugondanahalli, deep in the hills of Chamba in the Himalayan state of Uttarakhand, a radio jockey for Hewal Vani reminds audiences to tune into their new series on girl education. Started by a group of 20-something youngsters, Hewal Vani is one of the five CRS groups in the poor state focussing on health, superstition, education and civic matters.

All RJs for the station are recruited from the village itself but programmes are designed keeping the neighbouring rural belt in mind. About 10-15 people from in and around the village visit the station every day to be a part of some interactive programme or the other. Everyone is free to pitch in with ideas and communicate with the entire community.

“This way, we share ideas, knowledge, creative skills, entrepreneurial pursuits and even stories about local heroes,” elaborates Vijay Khetrapal, a volunteer. “Government policies, finance, legal issues, everything is explained in a manner that the villagers can comprehend. Teachers, parents and lawyers are regularly invited to voice their opinion. We try to generate debate and discussion among listeners and take their feedback very seriously.”
.
At most CRS centres, it is the villagers themselves who generate content. They write scripts, arrange talk shows on issues which demand awareness, master the art of sound editing and mixing as well as anchoring. Some stations even have citizen journalists spread across the village to report on newsworthy events. .

With the government opening up non-commercial community radio broadcasting in India, voluntary groups are effectively leveraging the power of communication for community development. And this is where CRS play a catalytic role.

Development Alternatives, a pan-India civil society organisation, is working to create sustainable livelihoods in Bundelkhand in the central state of Madhya Pradesh through CRS. The organisation is helming Shubh Kal (a campaign for a better future) to inform and educate local rural communities about climate change adaptation options. The communication model optimises use of existing community radios in the region to disseminate information in over 400 villages.

Similarly, ‘Chala Ho Gaon Mein’ in the tribal Indian state of Jharkhand, ‘Kunjal Panchhi Kutch Ji in Kutch (western state of Gujarat), ‘Namma Dhwani’ (in Karnataka) are trying to usher in change while empowering the downtrodden. Similarly, ‘Mandakini ki Awaaz’ in Uttaranchal is also producing and disseminating local content through cable and satellite.

Community radio was launched in India in 2002 with about a dozen players. Today, the medium has spread its reach far and wide and in remote villages, it is often the only media available. “Such initiatives fulfill the role of a public broadcaster and represent views of the local populace. This helps give a voice to the disempowered enabling them to engage those who have the power to make decisions,” opines Dr. Kirti Shire, Journalism Professor at Jamia Millia Islamia, New Delhi.

What also makes community radio relevant in this internet age is its sheer reach, adds Shire. “If television reaches 60 per cent of the total households in India, radio can access 99 per cent, making it a cost effective and powerful medium for information dissemination. Also, community radio perceives listeners not only as receivers and consumers, but also as active citizens and creative producers of media content ”

Experts also feel that in India, where literacy remains a substantial barrier to development, CRS is perhaps the only avenue for the poor to gain knowledge as radio uses little electricity still unaffordable for many. More than 70 per cent of Indian population lives in villages and a vast majority of them have little to no connectivity to internet, electricity or telephone lines making radio the only feasible medium for mass communication.

Low-power CRS, say experts, have thus been transforming lives. Today, village after village is taking up self-help projects, building toilets near homes, using cow dung instead of wood for cooking purposes, sending kids to school, understanding how foeticide can be counterproductive for them due to information disseminated over CRS.

Perhaps India is taking a leaf out of the UN’s books. Radio initiatives have been successfully leveraged as development strategies by various international agencies like UNESCO, UNICEF and FAO of the United Nations since the 1960’s. FAO developed the strategic extension campaign methodology in Africa, Asia and Latin America to support the local extension workers. CRS also endorses the letter and spirit of the Milan Declaration on Communications which maintains that the media has a responsibility to help sustain the diversity of the world’s cultures and languages.