Farhang Jahanpour is a former professor and dean of the Faculty of Foreign Languages at the University of Isfahan and a former Senior Research Fellow at Harvard University. He is a tutor in the Department of Continuing Education and a member of Kellogg College, University of Oxford

OXFORD, Feb 8 2016 (IPS) - After many years of unprecedented, crippling Western sanctions that stopped Iran’s oil exports and even banking transactions, the long and arduous negotiations between Iran and the P5+1 (the United States, Russia, China, United Kingdom, France and Germany) culminated in the Joint Comprehensive Plan of Action (JCPOA) agreed on 14 July 2015. That agreement finally reached the Implementation Day on 16th January 2016, coincidentally 37 years to the day when the late Mohammad Reza Shah left Iran for good and paved the way for the victory of the Islamic revolution. 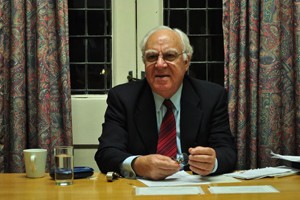 “Today, we have reached Implementation Day of the Joint Comprehensive Plan of Action (JCPOA). Ever since Adoption Day, we worked hard and showed mutual commitment and collective will to finally bring the JCPOA to implementation. Today, six months after finalization of the historic deal, the International Atomic Energy Agency (IAEA) has verified that Iran has implemented its nuclear related commitments under the JCPOA.”

In order to reach Implementation Day, Iran had to carry out its part of the deal, which it did meticulously and ahead of the deadline. According to the JCPOA, Iran halted its production of uranium enriched to 20 per cent, removed the core of the heavy water reactor in Arak and filled the channels with cement, rendering it inoperable. Iran dismantled over 13,000 centrifuges, leaving the country with 6,104 first-generation IR-1 machines, of which 5,104 are enriching uranium to 3.67 percent, and 1,044 machines at the Fordow site will remain inoperative. Meanwhile, all of this has been carried out under strict IAEA supervision, which will also continue to closely monitor Iran’s future nuclear activities.

The Implementation Day coincided with the successful prisoner exchange, involving five Americans (including four dual citizens) held in Iran, in return for seven Iranians (including six dual citizens) who had been charged with violating US sanctions against Iran. Secretary of State John Kerry called it “one of the days that I enjoyed the most as secretary of state.”

A few days earlier, Iran had released ten US sailors who had “inadvertently drifted” into Iranian waters. Initially, it was said that the two boats travelling between Kuwait and Bahrain, equipped with three 50-caliber machine guns, had developed mechanical problems, or their GPS equipment had failed, or that they had run out of fuel, but later all those excuses were proven to have been incorrect. So far, US authorities have provided no satisfactory explanation as to how two US Navy ships had lost their way together and had ended up miles away in Iranian waters next to Farsi Island, a very sensitive Iranian naval base. Some Iranian hardliners saw it as a provocation and an attempt to spy on Iranian military installations.

It should be noted that Saudi Arabia executed the prominent Shia cleric, Nimr al-Nimr on the eve of Implementation Day. Al-Mimr’s execution led to attacks on the Saudi Embassy in Tehran, leading to Saudi Arabia cutting off diplomatic relations with Iran and forming a mainly Sunni coalition against that country. Some conspiracy theorists have wondered whether al-Nimr’s beheading and the US Navy ship that “drifted” into Iranian waters might have been a last-ditch effort by some of the opponents of the deal to derail the agreement.

Be that as it may, some hawks in Washington immediately accused Iran of aggressive behavior and called for harsh punishments. Sen. John McCain criticized what he called Iran’s “provocative behavior”. Sen. Cory Gardner even suggested that President Barack Obama had to postpone his State of the Union address until the sailors had been released. The columnist Charles Krauthammer seized on the incident to discredit the nuclear deal. He wrote: “The premise of the nuclear deal was that it would constrain Iranian actions. It’s had precisely the opposite effect.” However, the speedy release of American sailors disappointed the hawks on both sides and paved the way for closer cooperation between the United States and Iran.

President Obama rightly celebrated the combination of those events as the vindication of his efforts over the previous years. In a Sunday 17 January 2016 statement at the White House, the President said: “This is a good day, because once again we’re seeing what’s possible with strong American diplomacy.” The President touted his administration’s efforts at diplomacy and advancing relations between the two adversaries, “rather than resorting to another war in the Middle East”.

Obama also pointed to the speedy release of the U.S. sailors as more evidence of the benefits of diplomacy. “Some here in Washington said this was the start of another hostage crisis,” Obama said, referring to some Republicans in Congress. “Instead we secured their release in less than 24 hours.”

Iran’s President Hassan Rouhani, speaking almost simultaneously with President Obama, said that the official implementation of the landmark deal had satisfied all parties except radical extremists. He said the deal had “opened new windows for engagement with the world.”

He described the deal as a win-win agreement for all negotiating parties and all factions inside Iran and in the West: “Nobody has been defeated in the deal, neither inside the country nor the countries that were negotiating with us.”

The agreement has provided the best example of the resolution of one of the most difficult international issues through negotiations and without resorting to war, which would have had a devastating outcome for the region and beyond. Indeed, it can serve as a model for the resolution of other difficult conflicts such as the civil wars in Syria, Yemen and Libya and the Arab-Israeli conflict.