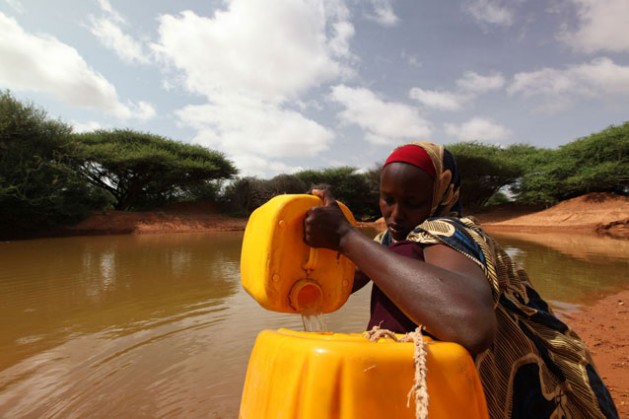 A Somali woman in Garowe drawing water from one of the many man-made ponds dug through a UNDP-supported initiative to bring water to drought-affected communities. Credit: UNDP Somalia

MOMBASA, Kenya, Mar 22 2016 (IPS) - While the United Nations marked this year’s World Water Day on March 22 focusing on the connection between water and jobs, a new report has rung loud alarm bells about the heavy impact of corruption on the massive investments being made in the water sector.

Each year, between 770 billion and 1,760 billion dollars are needed to develop water resources and services worldwide — yet the number of people without “safe” drinking water is about as large as those who lack access to basic sanitation: around 32 per cent of the world’s population in 2015, Transparency International on March 22 reported.

And asked how can so much be spent and yet such massive shortfalls still exist?

“One answer: About 10 per cent of water sector investment is lost to corruption.”

This striking information came out on the occasion of World Water Day 2016, as the Water Integrity Network (WIN) released a new report that documents the legacy of corruption in the water sector.

The WIN report reveals corruption’s costly impact on the world’s water resources. It also shows the degree to which poor water governance negatively affects the world’s most vulnerable populations – specifically women, children, and the landless. 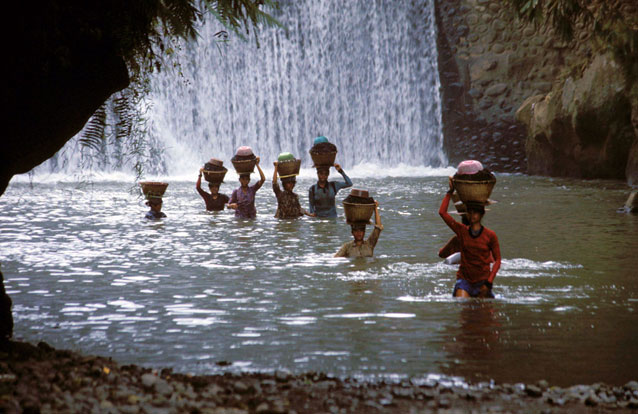 Women carry gravel from the river to be taken to a construction site in Indonesia. Credit © Maillard J. /ILO

While access to water and sanitation were formally recognised as human rights by the UN General Assembly in 2010, the reality is far from this goal, says WIN, a network of organisations and individuals promoting water integrity to reduce corruption and improve water sector performance.

“According to the World Health Organisation and UNICEF, some 663 million people lack access to so-called “improved” drinking water sources globally… this contributes to 1.6 million deaths annually, most of whom are children under 5 years old.”

Although the UN’s new 2030 Agenda includes a Sustainable Development Goal (SDG 6) on water and sanitation as well as a mandate for accountable and inclusive institutions at all levels (SDG 16), action is needed so that pervasive and systemic corruption do not continue to seep from the water sector, according to the report.

The study cites some specific cases. In 2013, Malawi’s reformed public financial management system was misused to divert 5 million dollars in public funds to the private accounts of officials.

Another case: in 2015, an audit of the 70 million euro phase II national water programme in Benin, which included 50 million euro from the Netherlands, revealed that 4 million euro had vanished. Dutch development cooperation with the Benin government was suspended thereafter to safeguard additional funds.

Corruption is, however, not limited to developing countries. In fact, WING cites an example from the United States. “In California, a member of the State Senate in 2015 declared a system of permits that allowed oil companies to discharge wastewater into underground aquifers to be corrupt.”

Further more, the Water Integrity Global Outlook 2016 (WIGO) shares examples of both corruption and good practices at all levels worldwide.

In this sense, WIGO demonstrates how improved governance and anti-corruption measures can win back an estimated 75 billion dollars for global investment in water services and infrastructure annually.

It therefore highlights and draws lessons from those examples of where governments, companies, and community groups have won gains for water consumers and environmental protection.

WIN works to raise awareness on the impact of corruption especially on the poor and disenfranchised assesses risk and promotes practical responses. Its vision is a world with equitable and sustained access to water and a clean environment, which is no longer, threatened by corruption, greed, dishonesty and willful malpractice.

Formerly hosted by Transparency International, the WIN global network is formally led by the WIN association and supported by the WIN Secretariat in Berlin.