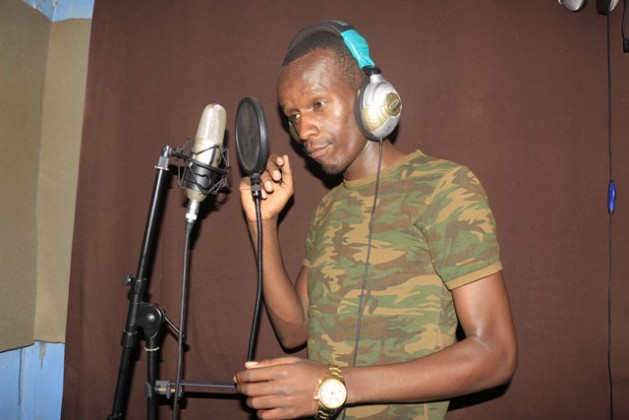 Musician Art Attack in a music studio in Nairobi. The artist released a song promoting gay rights which has been banned by the government. Credit: Lydia Matata/IPS

NAIROBI, Kenya, Apr 27 2016 (IPS) - In a recently released music video by a Kenyan artist, a young gay and lesbian couple hold hands on separate dates at a park in Nairobi. The progress of their love from kisses to more graphic bedroom scenes are threaded with past images of anti-gay headlines and protests mainly from Uganda and Kenya.

Art Attack, the musician behind the song Same Love — a remix of a 2012 single by US based Macklemore and Lewis — says he released it to awaken Kenyans and start a conversation on gay rights.

The video which has over 200,000 hits on YouTube so far was banned by the Kenya film classification board days after it was published in mid-February.

The board’s chairman, Ezekiel Mutua, warned that “anyone found distributing the video on any platform shall be held accountable in line with the law.” The board issued similar restrictions on the locally made film “Story of our Lives” also dealing with same sex relationships. Homosexuality is punishable under Kenya’s penal code which dictates a sentence of up to 14 years for offenders.

Art Attack, whose real name is Ken Kabuga, says he has been involved in Kenya’s lesbian, gay, bisexual and transgender (LGBT) rights movement from 2013 because of a gay relative. He has also written on this issue for local blogs. According to him, the song is based on the life of gospel artist, Joji Baro (George Barasa), who he interviewed in September 2013.

Art Attack says he was inspired to write the song after hearing the openly gay musician’s story: “from all the articles I have ever written, this one man’s story touched me because of what he has gone through for no reason at all. He did not do anything to deserve the hate he has gotten.” He adds that he is happy that the government banned the song as the directive has triggered a bigger buzz about the video.

Aside from the ban, Art Attack has also received a flood of hate mail. “The reception is beautiful. I wanted to create a conversation and I expected the hate mail. I am not surprised that people are saying that I should go to hell and I should be killed. They are saying this about me the artist, so you can imagine how much hate a gay person in the slums or the villages receives every day,” he elaborated.

“When the video was banned I wasn’t shocked because to the government I’m already banned. So to me it was just another of their stunts to look like they are doing their work. At the end of the day they gave us free publicity,” says the 25 year-old Joji Baro, who also features in the video.

“I was featured in the Same Love song because it talks about my life. The script was based on my biography,” says Baro adding that he turned to drugs and alcohol after his family disowned him because of his sexual orientation when he was still in in high school. He discovered he had HIV a few years after his family kicked him out:
“I live a life where achieving simple things in life such as having sex is close to impossible simply because am openly gay and HIV positive,” he says.

He uses his platform as gospel artist to advocate for LGBT rights and to address issues affecting society. He says that the ban will not stop him from working on more videos.

Legislator Irungu Kang’ata, who is also the head of a parliamentary anti-gay caucus, welcomed the ban, despite the video still being accessible online. “The ban is still effective because not many people in Kenya access music videos through the internet,” Kang’ata said during a phone interview.

“As far as I know, most Kenyans access music on television and radios. What is important is that we save at least one soul from exposure,” he says. Kang’ata adds that the video shows graphic sexual content which he says do not feature in other music videos.

He, however, has no issue with images of him, including one at an Anti-Gay rally that he led in Nairobi in 2015, also feature in the video. “I think it was meant to show that gays are oppressed in Kenya and that I am one of the politicians oppressing them. I am happy with that because it is a fact, I am fighting against homosexuality” Kang’ata says.

Rapper and spoken word artist, Grace Wambui Munene, who goes by the stage name Grammo Suspect says she supports Art Attack because they are both in the same fight.

Grammo Suspect also released a track, My Love Is Valid, in February which features her girlfriend of four years.

The track delivered through spoken word defends her dream of being with a woman, knowing that most would call it a nightmare. She also challenges religious and traditional perceptions of same-sex relationships by pointing out that these were historically present in African culture.

“Everyone says all dreams are valid. You can dream about having or wanting a handsome husband, but I should also be allowed to dream about having a beautiful wife. People do not choose their dreams they just come to you,” Grammo Suspect says.

She explains that she also wanted to show audiences that same-sex relationships were normal and accepted in Africa by providing historical facts.

The rapper who is working on her second album, Embrace Diversity, says she not only struggled with the decision to come out to friends, family and the wider public, but also to produce songs dealing with LGBT rights. She says financial difficulties coupled with a lack of self-acceptance pushed her to a life of drugs and crime.

The rapper says that it is almost impossible for an openly gay woman singing about LGBT rights to get shows in the Kenyan music industry. “Who is going to call me to sing Our Love Is Valid? I cannot perform at shows, because people will tell organisers that they are allowing a Lesbian to perform on their shows,” she says.

Art Attack says he plans to release a new song and also hold a concert for the LGBT community. “Everyone will be welcome, but it will be targeted towards the gay community because I have not heard of a concert that is just an opportunity for them to have fun,” he says.