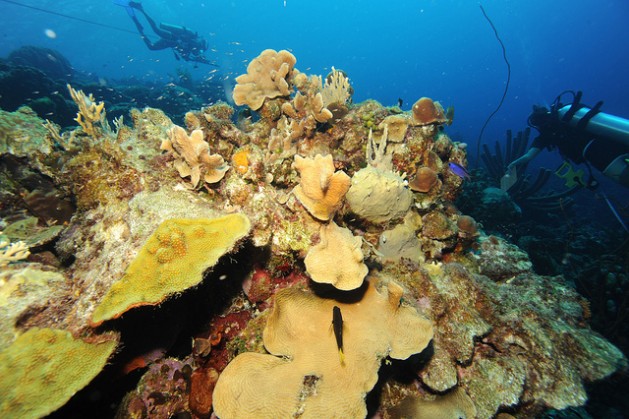 Jun 7 2016 (IPS) - A recent UN Educational, Scientific and Cultural Organization (UNESCO) report on world heritage sites in danger from climate change received widespread media attention after the Australian government requested the removal of a chapter on the Great Barrier Reef.

However the Great Barrier Reef is not the only coral reef at risk from climate change. The report described how coral reefs all around the world are being directly effected by warming waters and acidification associated with changes in the climate.

While coral reefs can adapt to gradual changes in ocean temperature, especially if they are free from other local stressors like over-fishing and water pollution, it is expected that their ability to adapt is “highly likely” to be outstripped by rates of climate change in the coming decades, the report said.

Keeping half of the world’s coral reefs would require stopping warming at just 1.2 degrees, the report said, while preserving more than 10 percent would require limiting warning to 1.5 degrees celsius.

However the world is already far off track for achieving such limited rates of warming, and many coral reefs are already in danger.

“We know that temperature is the main driver of bleaching and that temperature increases are primarily related to global climate change,” Melanie McField, Director of the Healthy Reefs for Healthy People Initiative at the Smithsonian Institution told IPS.

“There will be a limit where the temperature becomes so high that even the ones in the pristine areas with the right balance of fish and clear, clean water they will also be impacted.”

Addressing local stressors such as over-fishing and water pollution can help the reefs to adapt, but McField says that this is only buying the reefs some time.

“It buys you time, that’s the way we often explain it, while those leaders in the United Nations (UN) fix the problem.”

“We’re doing all the other things, but on the climate really we’re looking to the UN, to the leaders, to the private sector, someone else has to fix that,” she said.

Many of the world’s coral reefs are in developing countries, which rely on them for tourism and fishing.

“Tourism is now the number one sector of the economy in most of the Mesoamerican reef,” said McField.

However while many developing countries rely on coral reefs for tourism, their ability to help save them varies, Madhavi Colton, Lead Conservation Scientist at the Coral Reef Alliance told IPS.

“Yes coral reefs are in a lot of trouble but there are still things that we can do, we can still save coral reefs,” she said.

Colton said that marine parks such as the Rorotan Marine Park in Honduras have been successful in helping reefs and fish to recover.

Another notable example, she said, is the country of Palau in the Pacific.

“Their government has realised that the vast majority of their revenue comes from tourism so they’ve established a green fee which is a tax on every visitor who visits Palau and that money is used to protect the resources that people are coming there to visit.”

However Colton also noted that “there are other places that the government realises that tourism is a major part of their economy, and they’d really like to figure out how to protect the resources to support that tourism but … even if there’s a will or a desire to do something they still have other more pressing concerns,” she said.

She noted that Jamaica is one country that has lost its coral reefs, due to a series of bad events in the 1980s, impacting dive tourism in the Caribbean country.

Protecting the reefs is also important because they provide an important but delicate ecosystem where fish can thrive, and they also support other important ecosystems, including sea grasses and mangroves, said McField.

The sea grasses and mangroves are both powerful traps for carbon, thus helping to regulate climate change, said McField.

“Having the reef there changes the water dynamics so it breaks the waves and it makes the lagoons nice and sheltered and those sheltered lagoons you have dense beds of sea grass and that is a big trap of carbon.”

“Shoreward from that you’ve got the coastlines that are protected by reefs tend to have mangroves and that’s the best carbon sink.”

“Per square meter (mangroves) are trapping more carbon than rainforest.”

The mangroves also help to protect the shoreline from erosion and also support the main fisheries such as snappers and lobsters, said McField, whose main area of expertise is the Mesoamerican reef.