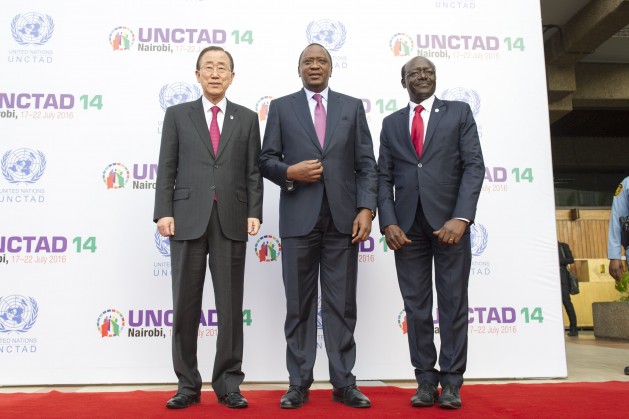 Secretary-General Ban Ki-moon (left) poses for a photo with Uhuru Kenyatta (centre), President of the Republic of Kenya, and Mukhisa Kituyi, Secretary-General of the United Nations Conference on Trade and Development (UNCTAD), at the opening of the fourteenth UNCTAD session, taking place in Nairobi, 17-22 July 2016. Credit: UN Photo/Rick Bajornas

UNITED NATIONS, Jul 29 2016 - The UN Conference on Trade and Development (UNCTAD) concluded its five-day meeting in Nairobi on a positive note—the launch of a new e-trade initiative and a multi-donor trust fund on trade and productive capacity.

The meeting, attended by more than 5,000 delegates from 149 countries, also launched the first UN statistical report on specific indicators on the 17 Sustainable Development Goals (SDGs) and a commitment for a roadmap on fisheries subsidies.

The negotiations ended in the early hours of July 22 after two marathon all-night sessions. The resulting Nairobi consensus, “the Maafikiano”, also sets UNCTAD’s work programme for the next four years.

Billed as UNCTAD 14, the conference was formally opened by UN Secretary-General Ban Ki-moon, in the presence of Kenya’s President Uhuru Kenyatta and the vice-President of Uganda, Edward Kiwanuka Ssekandi.

The meeting also launched the 2016 report on ‘Economic Development in Africa’, and highlighted issues around non-tariff measures, debt, and illicit financial flows, along with a fashion show focusing on the creative and commercial potential of Kenya’s fashion industry.

In his opening address, the Secretary-General warned about the “worrying signs that people around the world are increasingly unhappy with the state of the global economy.”

He said high inequality, stagnant incomes, lack of enough jobs – especially for youth — and too little cause for optimism stoke legitimate fears for the future for many in all regions.

“The global trade slowdown and a lack of productive investment have sharpened the deep divides between those who have benefited from globalization, and those who continue to feel left behind. “

And rather than working to change the economic model for the better, Ban said, many actual and would-be leaders are instead embracing protectionism and even xenophobia.

"International financial institutions, which are one of the main sources of financing for development of developing countries, need to be universal, rule-based, open, non-discriminatory and equitable." -- Apichart Chinwanno.

“The vision set out in the SDGs – for people, planet, prosperity and peace – will not succeed if shocks and stresses in our global economic and financial system are not properly addressed,” he noted.

Trade must provide prosperity in ways that work for people and planet and respond to the challenges of climate change, said Ban.

A Ministerial Declaration adopted by the 134 members of the Group of 77 and China on the occasion of UNCTAD addressed the “key issues that are of major concern to developing countries,” said Apichart Chinwanno, Permanent Secretary And Special Envoy Of The Minister Of Foreign Affairs of the Kingdom Of Thailand, speaking on Behalf of ‘The Group Of 77 and China In New York’.

“These (key issues) include the need to tackle subsidies and various forms of market access restrictions, tax evasion and tax avoidance, illicit capital flows, sovereign debt crisis as well as the need to uphold principles of equity, inclusiveness, common but differentiated responsibilities, special and differential treatment, and the right to development, just to name a few,” said Chinwanno at a Ministerial Meeting Of The Group Of 77 held on the occasion Of UNCTAD in Nairobi on July 17.

“International financial institutions, which are one of the main sources of financing for development of developing countries, need to be universal, rule-based, open, non-discriminatory and equitable,” added Chinwanno.

Chinwanno also noted that Official Development Assistance (ODA) remains at an average of just “0.29% of the aggregate donor Gross National Income in 2014, well below the commitment of 0.7%.”

According to an UNCTAD press release, this year’s conference, with the tagline “From decision to action”, had added significance because it was the first UNCTAD conference since the global community established the Sustainable Development Goals and mandated – via the Addis Ababa Action Agenda – with UNCTAD as one of five international organizations to mobilize financing for development.”

The other four organizations are the World Bank, the International Monetary Fund (IMF), the World Trade Organization (WTO), and the UN Development Programme (UNDP).

Martin Khor, Executive Director of the Geneva-based South Centre said an important aspect of today’s global economy is that the economic weight of the South has undeniably increased, with China and India accounting for a large share of this increase.

He said developing countries as a whole are more integrated into the world economy.  However, these changes have not yet constituted a full scale shift in the global landscape.

The development gap between the North and the South still exists, even exacerbated for some countries.  The task of bridging this gap is becoming more complex and difficult in today’s global economic environment, he cautioned.

Throughout the various major international negotiations that took place last year that resulted in the recently concluded international outcomes like the 2030 Agenda for Sustainable Development, the Addis Ababa Action Agenda on Financing for Development, and the UN Framework Convention on Climate Change’s Paris Agreement, the South continuously highlighted the need to close the development gap faster and in a more sustainable and equitable manner, he noted.

“None of these outcomes of the international community could have been achieved without the support and leadership of the Group of 77 and China,” said Khor.

“I’m delighted that our 194 member states have been able to reach this consensus, giving a central role to UNCTAD in delivering the sustainable development goals,” UNCTAD Secretary-General, Mukhisa Kituyi, said, just after the conclusion of the meeting.

“With this document, we can get on with the business of cutting edge analysis, building political consensus, and providing the necessary technical assistance that will make globalization and trade work for billions of people in the global south,” he said.

UNCTAD14 President, Amina Mohamed, said: “As the President of this conference, I cannot begin to tell you how I feel right now.”