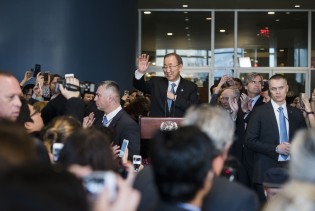 By an IPS Correspondent
The Group of 77 has expressed its “deepest appreciation” to outgoing UN Secretary-General Ban Ki-moon “for his service and dedication to the United Nations over the past ten years.”

By an IPS Correspondent
Countries of the Global South, also known as developing countries, share many principles in common when it comes to implementing the UN’s Sustainable Development Goals.

By Thalif Deen
The Perez-Guerrero Trust Fund for South-South Cooperation (PGTF), described as one of the most successful ventures of the Group of 77, has provided $13.2 million in “seed money” for 278 small-scale projects in developing countries.

By Tharanga Yakupitiyage
As countries came together at the United Nations this week to sign the Paris Climate Change Agreement, partnerships were forged between countries of the global South to support the implementation of the global treaty.
ADVERTISEMENT ADVERTISEMENT