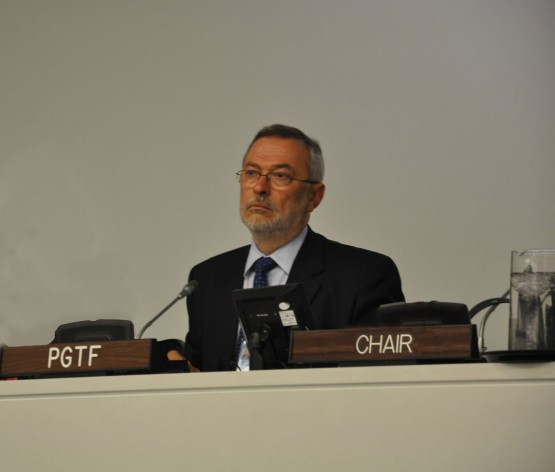 The PGTF’s five-member Committee of Experts is chaired by Dr Eduardo Praselj.

UNITED NATIONS, Oct 3 2016 (IPS) - The Perez-Guerrero Trust Fund for South-South Cooperation (PGTF), described as one of the most successful ventures of the Group of 77, has provided $13.2 million in “seed money” for 278 small-scale projects in developing countries.

With mandatory “matching funds” from outside sources, the total value of the projects has been estimated at over $38.5 million since the PGTF began operations 30 years ago.

The projects, held out as prime examples of South-South cooperation, are largely regional, sub-regional and inter-regional covering, Asia-Pacific, Africa, the Middle East and Latin America and the Caribbean.

The financing, which is maximized at $35,000 each, has benefited a wide range of projects related to socio-economic issues in the developing world.

At its meeting in July 2016, the PGTF’s five-member Committee of Experts, chaired by Dr Eduardo Praselj, recommended funding for 13 of the 26 applications submitted this year.

The recommended allocation for these 13 projects, which was approved at a ministerial meeting of the Group of 77 in late September, totaled $435,000.

“It is South-South cooperation at its best – without going into high level diplomatic stuff – and directly involving field actors.” -- Dr Eduardo Praselj.

The approved projects include: an E-commerce development programme for small and medium enterprises (SMEs) from developing countries; capacity-building on management and utilization of solar energy resources for improving living conditions in rural areas; bamboo development assessment for Asia and Africa under China’s “One Belt, One Road” Initiative; research on economic diversification of land-locked developing countries; and cooperation for intellectual property and productive transformation in Latin America and the Caribbean, among others.

Over the years, three priority areas have received about 70 percent of total support from PGTF: namely technical cooperation, food and agriculture, and trade.

In an interview with IPS, Dr Praselj said PGTF-approved projects have benefited a large number of developing countries, as well as institutions and peoples within these countries.

Dr Praselj said the projects approved involve sharing knowledge and experience. “It is South-South cooperation at its best – without going into high level diplomatic stuff – and directly involving field actors.”

In Latin America and the Caribbean, he said, a number of countries were working on projects on sugar cane by-products. In Africa, there were small scale hydro power and solar energy projects (and also how to better cultivate maize and rice).

A coalition of six countries – Afghanistan, Jordan, Egypt, Algeria, Tunisia and Palestine – received funding to battle animal diseases affecting cattle, goats and sheep (with the danger of some these diseases being transmitted to humans).

He said the PGTF has also approved projects in Latin America and the Caribbean supporting poor farmers, with no managerial capacities or bargaining powers to market their products.

He described the PGTF as “healthy, transparent, efficient and low cost”.  He highlighted that the Fund has been receiving a steady flow of well-prepared project proposals, the input for PGTF activities. “The better the raw material, the better the product,” said Dr Praselj.

He pointed out that PGTF approved projects are geared towards all 134 members of the Group of 77, the largest single coalition of developing countries.

Asked if priority is given to any special group of developing countries, he said: “There is no special window,” pointing out that applicants include governments, universities, international institutions, think tanks and regional, sub regional and inter-regional bodies.

He said 90 percent of the 278 approved projects are in full implementation within their specific deadlines.

The PGTF was established in 1983, in accordance with the UN General Assembly Resolution 38/201, with an initial core capital of $5.0 million, which was increased to $7.0 million, with $1.0 million each in magnanimous contributions from two member countries: Venezuela in 2004 and Oman in 2015.

The PGTF, which is described as an “endowment fund”, is managed by the UN Development Programme (UNDP).

In keeping with guidelines for its utilization, only interest accruing on the Fund could be used to support projects so as to preserve intact the $7.0 million core capital.

Dr Praselj said the Committee discusses and agrees on investment strategy with the UNDP Treasury. The paramount consideration for investing PGTF resources is preservation of the capital while striving to achieve the highest possible return.

“The higher the risk, the higher the rewards,” he said, “But you will have to strike a balance. You cannot be smarter than the market.”

The PGTF Committee has invited other countries to follow these “encouraging initiatives.”

The deadline for the submission of project proposals for next year is 30 April 2017. More information can be found on the PGTF website.