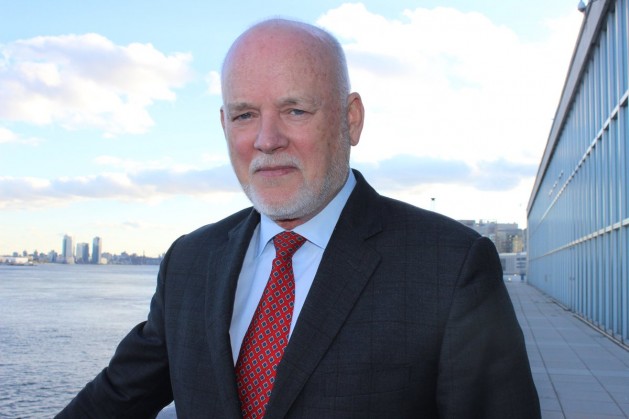 UNITED NATIONS, Nov 1 2016 (IPS) - Development should be about more than building roads or buying air conditioners, the President of the UN General Assembly, Peter Thomson told IPS in a recent interview.

Thomson, who started his career working as “a rural development man in Fiji” says he had become disillusioned with development before the Sustainable Development Goals came along.

After studying development studies at Cambridge Thomson returned to Fiji where he spent much of the 1970s working in villages for the Fiji government: “digging pit latrines and building sea walls.”

However he began to feel disillusioned by development when he saw that it ultimately led to communities breaking up. Young people would leave to sell produce at the markets on newly constructed roads, and then eventually would stop coming back.

“It just seemed we were covering all our best agricultural land with urban sprawl.”

However Thomson believes that the Sustainable Development Goals (SDGs) – which UN member states have agreed to implement between 2016 and 2030 – represent a different paradigm, as for example shown in goal 12 – which promotes responsible consumption and production.

He observes how Fiji has become reliant on air conditioners which didn’t even exist there 30 years ago.
“We were brought up to sleep in a room that had cross breeze.”

As President of the 71st session of the UN General Assembly from September 2016 until September 2017, representing his home country of Fiji, Thomson is now tasked with leading the second year of implementation of the goals among UN member states.

He sees the sustainability aspect of the development goals as being about ensuring that his grandchildren’s generation will have a future on this planet.

“With that sustainability added to development you have a future for humanity, as opposed to what we’re on at the moment which is just this path towards (economic growth).”

However Thomson acknowledges that achieving all 17 of the goals will not be easy.

“I still think the stakes are very high in that there are elements of the SDGs which are not necessarily attainable, but we have to nevertheless fight for their attainment.”

Two targets he notes will be particularly difficult to achieve are Goal 13 on Carbon Dioxide (CO2) levels, and Goal 14 on ocean acidification.

In order to achieve the goals Thomson now believes that it is important that they go beyond the four walls of the UN General Assembly.

“I see the SDGs as rights and responsibilities of people (but) you can’t fight for your rights unless you know what they are and at present the great majority of humanity does not know what the SDGs are.”

Realising the goals will also require a complete rethink of development funding.

“It’s not just throw some money at the SDGs it’s how do you transform the financial system to make it financially sustainable?” says Thomson, noting that the current financial system will collapse at a certain point if it continues on its current trajectory.

“At a point somewhere between three percent and four percent of CO2 levels over pre-industrial age the insurance industry stops functioning because they just can’t handle the risk,” he says.

Achieving the goals therefore requires transforming the global financial system so that the world’s capital – the majority of which is handled by about half a dozen firms – is invested in long term rather than short term projects, he said.

Thomson sees the role of Official Development Assistance – the official term for government aid – as being more effective when it is used to encourage private sector investment, an idea which he says is gaining traction at the UN.

However he also notes that addressing tax cooperation is also needed.

“I’ve seen the calculations on Africa. If they had proper taxation on their wealth Official Development Assistance isn’t even a toenail compared with what good taxation would produce for governments to build schools and roads.”

Tax cooperation has been an issue particularly of interest to the 133 developing countries at the UN which form the Group of 77 or G77.

Thomson a former Chair of the group in 2013, believes that tax cooperation will be a key issue for Ecuador which will chair the group from January 2017.

At the heart of the G77 he says is the objective of equity.

“The fact that we do come together eventually – after long discussions, in common positions, not always but most of the time, is because everybody believes in this principle of equity in this world.”

“The fact is that there’s still so much to do to bring developing countries into an equitable position in the community of nations so that’s the grand work of the G77.”

“I think there’s also a recognition within the UN system that the G77 is necessary because you always think about a house of parliament there’s got to be government and opposition to argue through to get progress.”