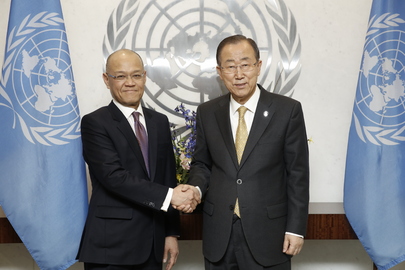 UN Secretary-General Ban Ki-moon (right) meets with Virachai Plasai, Permanent Representative of the Kingdom of Thailand to the United Nations and Chair of the Group of 77. Credit: UN Photo/Evan Schneider

UNITED NATIONS, Aug 1 2016 (IPS) - IPS spoke with the Virachai Plasai, Ambassador and Permanent Representative of the Kingdom of Thailand to the United Nations and Chair of the Group of 77 about what it’s like to represent 134 developing countries, including China, at UN meetings in New York. Plasai spoke about some of the group’s priorities for 2016, including the selection of the ninth UN Secretary-General, the 2030 Development Agenda, including the 17 Sustainable Development Goals, and the implementation of the Paris Climate Change Agreement.

IPS: The UN is currently selecting a Secretary-General for 2017 and G77 members have had the opportunity to question most of the candidates. Has this process been beneficial to G77 members? Do you think that this new, more open selection process will help ensure that the next Secretary-General will be somebody who understands the interests of developing countries?

Ambassador Plasai: The selection and appointment of the Secretary-General this year benefits from efforts to bring greater transparency and openness to the process, which G77 wholeheartedly support.

Of particular importance is the informal dialogues with candidates organised by the President of the General Assembly as mandated by the General Assembly. The Chair of G77 and several G77 members took part actively in these informal dialogues by posing questions on issues of interest to developing countries to the candidates. In addition, the Group have positively responded to the request from the candidates who wished to present their vision as Secretary-General to the Group and interact with the Group members.

IPS: How would you describe the role of the G77 at the UN in ensuring early implementation of the 2030 Agenda for Sustainable Development?

Plasai: The G77 have been committed to and have contributed constructively in ensuring early implementation of the 2030 Agenda. The Group has called for a sincere and effective follow up on global commitments of all actors, particularly developed countries. We believe that the United Nations has a critical role to play in urging national leaders and actors to follow up on their commitments, especially in the Financing for Development Forum and the High Level Political Forum (HLPF).

In this regard, the Group called for an intergovernmental process to discuss the follow-up and review of the 2030 Agenda in the form of a General Assembly resolution. The Group advocates for the following points in such a process:

All 17 goals are integrated and indivisible, ambitious and evolving. The review should be systematic, and promotes a holistic understanding of the significant interlinkages across the goals and targets.

All inputs and reports, including from functional commissions, should be fed into the HLPF.

It is up to each Member State to decide how to present the voluntary national review at the HLPF. It is important not to overburden countries, especially those with limited capacities and resources.

The follow-up and review at the regional level and sub-regional levels can, as appropriate, provide opportunities for peer learning, sharing of best practices and discussions on shared targets. It is important to build on existing mechanisms.

It is important to reinforce the existing modalities of Groups of countries in special situations, including the most vulnerable ones, in particular LDCs, LLDCs, SIDS and African countries. Particular challenges facing the middle-income countries in achieving SDGs should also be recognized and supported by the international community. Moreover, we must not leave peoples and countries under foreign occupation behind.

The UN system must support the implementation of the 2030 Agenda by ensuring coherent and integrated support of the system-wide strategic planning implementation and reporting.

The Secretariat must support member states in the implementation of the 2030 Agenda and must not work in silos.

IPS: The high-level signature ceremony for the Paris Agreement took place in New York on 22 April 2016 – what were some of the highlights of the day for the G77?

First, the Agreement is a result of the collective and tireless efforts of all parties working constructively in a spirit of compromise. It represents a step forward in our efforts on climate change.

Second, we must not forget the urgent need to enhance pre-2020 ambition, including the ratification of the Doha amendment to the Kyoto Protocol, which will provide a strong basis for post-2020 efforts under the Paris Agreement. We also need to address the significant gap between the aggregate effect of Parties’ mitigation pledges in terms of global annual emissions of greenhouse gases by 2020 and aggregate emission pathways consistent with the target to holding the increase in the global average temperature to well below 2ºC above pre-industrial levels. We should also make efforts to limit this temperature increase to 1.5º C.

Third, the focus now should both be on the entry into force of the Paris Agreement and on delivering the major tasks to enhance pre-2020 implementation. This includes action on adaptation which is an urgent priority for developing countries. Financing for adaptation is critical; and securing the continued role of the Adaptation Fund pre 2020 and beyond 2020 is welcomed and should be enhanced.

Fourth, on mitigation, developed countries should continue taking the lead by undertaking and increasing economy-wide absolute emission reduction targets for their pledges and nationally determined contributions (NDCs). For developing countries, capacity-building support for climate action is critical. This support should be based on and responsive to national needs and country ownership. The process of capacity-building must be participatory, country-driven, and cross-cutting. Enhanced financial and technological support from developed countries will allow effective implementation and enhance ambition of developing countries.

Fifth, transformation of our economies to low carbon development pathways requires adequate, predictable and sustainable climate financing. Means of implementation is a key pillar for the implementation of the Agreement. We welcome the approval of the first projects by the Green Climate Fund. We envision that a substantive decision on increasing climate finance will be an important outcome of COP 22 in Morocco.

IPS: What are the challenges and opportunities for the Group of 77 with regard to the global indicator framework for the 2030 Agenda?

Plasai: The challenge is that the development of the global indicators is a technical process which should continue to be led by the national Statistical Offices. At the same time, it has political implications. We believe that the political balance and ambition of the 2030 Agenda should be preserved without reinterpreting the scope or intent of the targets. The tricky part is that our national Statistical Offices need to understand the inherent political sensitivity of the SDG negotiations.

In this regard, we need to avoid undue haste to prematurely conclude the work of the Inter-Agency and Expert Group on Sustainable Development Goals Indicators (IAEG-SDGs). The adoption of the Report of the IAEG-SDGs by the Statistical Commission in March is just a starting point of the work on the global indicators. Further methodological work will be required with a view to continuously improving the indicators and the availability of data to address their shortcomings.

The opportunity lies in our insistence for a coordinated effort in the United Nations System to enhance statistical capacity in developing countries. Capacity-building is needed to strengthen statistical capacities at national and sub-national levels.

G77 have continuously urged an upgrade of the Committee of Experts on International Cooperation in Tax Matters to an inter-governmental subsidiary body.

We believe that such a global tax body can contribute to a coherent global tax system, less double taxation and double-non-taxation, stronger implementation, fair and consistent global action against tax havens, and more financing for development in the poorest countries.

Besides, such a global tax cooperation body will also allow all Member States to take part in and make decisions on tax matters, on a truly equal footing, and in a more accountable and transparent manner. This is all the more important in light of the recent high-profile international tax evasion cases.

It can be expected that such a global tax cooperation body can result in more effective tax policy and a more efficient domestic tax collection. At the same time, unfair international tax distortion and tax evasion can be reduced. More effective mobilization of domestic resources undoubtedly benefits the implementation of SDGs, and thus should be part of national sustainable development strategies.