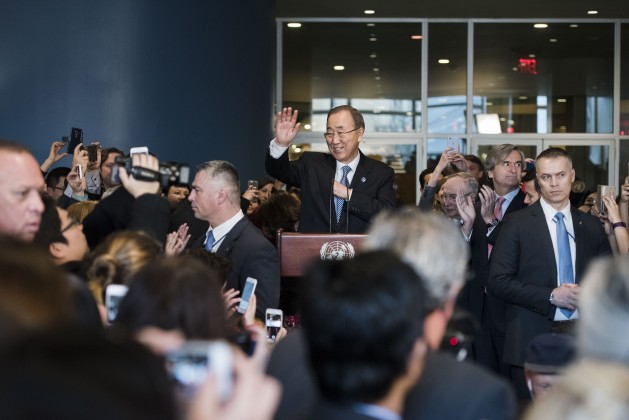 UNITED NATIONS, Dec 30 2016 (IPS) - The Group of 77 has expressed its “deepest appreciation” to outgoing UN Secretary-General Ban Ki-moon “for his service and dedication to the United Nations over the past ten years.”

“Under his leadership at the United Nations, the international community has made great strides and achieved several key milestones,” the Group said in a statement delivered in October.

Those milestones include: “the 2030 Agenda for Sustainable Development the Sendai Framework of Action, the Action Agenda of Addis Ababa and the Paris Climate Change Agreement, to name just a few,” the statement continued.

All of these agendas were also priorities for the G77.

Ban acknowledged the group’s contribution to these historic achievements in a speech in January 2016 where he said:

“None of these historical outcomes would have been achieved without the commitment and leadership of the Group of 77.”

“Under (Ban's) leadership at the United Nations, the international community has made great strides and achieved several key milestones,” -- G77.

Ban has also described the group as a “a driving force behind the adoption of the 2030 Agenda for Sustainable Development – our truly transformative plan for the planet and all people.”

During his two terms Ban established a closed working relationship with the G77 based on constant dialogue and consultations on critical development issues including senior appointments. He also addressed G77 Ambassadors on a regular basis.

At the G77 Ministerial meeting in September 2016 he commented on the group’s distinctive name:

“The G77 kept its distinctive name even after the membership expanded to 134 countries.”

“In the same way, I hope you keep the group’s founding spirit to stand up for the countries of the South while expanding your engagement to tackle emerging threats.”

Ban became the eighth UN Secretary-General on 1 January 2007. He was unanimously re-elected for a second term by the General Assembly in 2011.

As Secretary-General he set out to “give voice to the world’s poorest and most vulnerable people,” his priorities as Secretary-General included addressing global challenges such as climate change and the economic upheaval following the global financial crisis.

Before becoming UN Secretary-General Ban served as Minister of Foreign Affairs and Trade for South Korea.

He has often spoke about how his own experience growing up in South Korea in the aftermath of the Korean war affected his own appreciation for the United Nations.

“I grew up in war, and saw the United Nations help my country to recover and rebuild,” he has said.

This experience led Ban to pursue a career in public service and has made him determined as Secretary-General to “deliver tangible, meaningful results that advance peace, development and human rights.”

Ban will be succeeded by Antonio Guterres of Portugal.