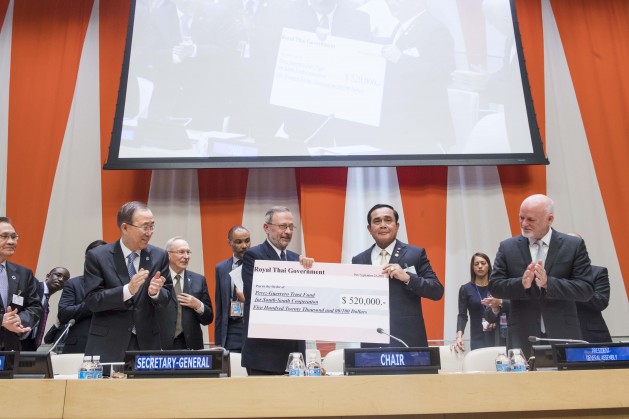 UNITED NATIONS, Sep 25 2016 (IPS) - On Friday, a group of 134 developing nations, known as the Group of 77 (G77), came together for a meeting to address challenges and solutions in achieving sustainable development. In attendance were G-77 Foreign Ministers, the President of the General Assembly, the UN Secretary-General and other UN senior officials.

During the 40th Annual Meeting of Ministers for Foreign Affairs, Thai Prime Minister Prayuth Chan-o-cha, whose country is currently Chair of the group, highlighted the need to translate the vision of the 2030 Agenda for Sustainable Development into concrete action in line with developing nations’ needs and interests.

“There is no one size fits all approach for development,” he told delegates.

Prime Minister Chan-o-cha pointed to several resources to ensure the realization of the Sustainable Development Goals (SDGs) including human resources.

“Human beings are full of potential and are the source of innovation and creativity. The challenge is how to tap that potential,” he said. Prime Minister Chan-o-cha looked to education and the improvement of quality of life as ways to build human capacity.

“The Global South’s cause is a universal cause for all mankind,” -- Ecuador’s Minister of Foreign Affairs Guillaume Long.

Another key challenge that arose during the meeting was ensuring equal participation of developing nations in discussions and solutions.

Prime Minister Chan-o-cha expressed his delight in being invited for the first time to the recent G20 Summit in China and called it an “opportunity” for the G77 and developing nations to be heard. However, he still stressed the need to build a global partnership within and beyond developing nations.

“Thailand, as a Chair of the Group, is working as a bridge-builder among all actors that share the same goal in creating a better world, a world without poverty,” he stated. He added that developed nations should assist G77 countries through short-term assistance and capacity building to pave the way for a long-term outcome with the group’s needs in mind.

During the meeting The Kingdom of Thailand made a contribution of 520,000 US dollars to the Perez-Guerrero Trust Fund (PGTF) for South-South Cooperation. The fund supports economic and technical cooperation among developing countries.

President of the 71st Session of the General Assembly (GA) Peter Thomson particularly underlined the importance of cooperation within the Global South.

“South-South cooperation represents the best expression of solidarity and interdependence among developing countries, and will be pivotal in complementing North-South, public and private SDG-implementation initiatives,” he told delegates in his opening address.

Thomson was Fiji’s Permanent Representative to the UN, making him the first GA President from the Pacific Islands. Fiji is also a member of the G77.

Ecuador’s Minister of Foreign Affairs Guillaume Long told delegates that there needs to be a “re-founding” of the multilateral system in order to increase solidarity.

“We need a UN with more voices and fewer vetoes,” he stated.

“The Global South’s cause is a universal cause for all mankind,” Long continued.

Ecuador is next in line for chairmanship of the G77 in January 2017, which marks the first time the country will assume the position.

The G77, which began with 77 nations, has since grown to include 134 member states from around the world. It has become the largest intergovernmental organisation of developing countries in the UN, allowing the Global South to express their needs and promote cooperation for development.

Both Thomson and Secretary General Ban Ki-moon noted that the G77 is an “indispensable” and “invaluable” partner of the UN.

Thailand will continue as chair of the G77 until the end of December 2016.

During the meeting Prime Minister Chan-o-cha also presented an award to G77Executive Secretary Mourad Ahmia to express appreciation for his leadership andsupport provided by the G77 Secretariat team to the Kingdom of Thailand as Chair country and to all the Member States.