Aug 8 2016 - The least populated, northernmost province in North America even its own citizens dread to go has a per capita GDP of C$58,452 compared with C$3,439.28 for the entire Philippines.

If the northernmost province of the Philippines, say Ilocos Norte, has a per capita of more than P2.1 million, chances are there would be a huge migration flow from Imperial Manila instead of the reverse.

There would also be less Ilocanos leaving the province or the region since the high per capita reflects a good economy that translates into jobs, income, and a good quality of life.

Across the globe and closer to the North Pole, Nunavut is the newest, largest and northernmost province of Canada (North America). At the same time, it is both the least populous (31,906) and the largest in area of the provinces and territories of Canada at 1,750,000 sq. km. compared with the smaller 300,000 sq. km. of the Philippines.

In 2014, only 23 people migrated to Nunavut—a microscopic dot—given the fact that a total of 260,404 migrants applied for and obtained their permanent residency in Canada. In the same year 40,035 from the Philippines migrated to Canada, which placed the Philippines back on top of the list of countries with the highest number of immigrants.

Imperial Manila, Metro Manila or National Capital Region (as it is officially called), is the coveted place to be in the Philippines because it is the region of culture, economy, education, and government.

People from the North, South, and Central Philippines move to Metro Manila for jobs and opportunities making it the 7th most populous metropolis in Asia and the 3rd most populous urban area in the world, according to Demographia.

In January 2015, Canada initiated the Express Entry—the current selection system for attracting and getting immigrants. In addition to the individual allocation of each province by virtue of Federal and Provincial agreements, each province may also set up its own mini-Express Entry and get more than the usual number of migrants calling a province their new home.

Of the 285,000 planned and targeted new immigrants last year, 65 percent will be in the economic immigration class, the remainder will be in the family reunification and humanitarian categories, including refugees.

In addition Canada has increased “the number of caregivers becoming permanent residents to 30,000 in 2015, an all-time high in that category.” 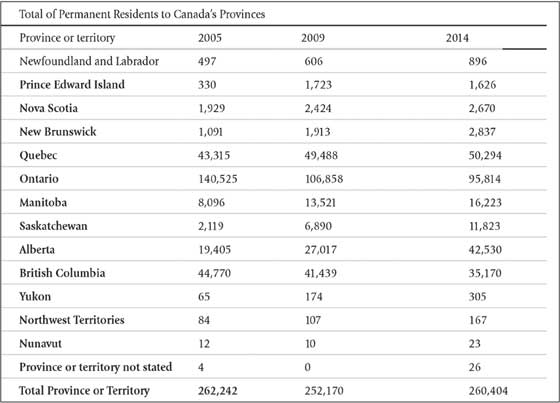 Nomination programs common to all provinces

The migration statistics for the period indicated showed that without their own programs, applicants qualifying under the Federal immigration programs (Federal Skilled Workers, Federal Skilled Trades Workers, Canadian Experience Class, and International Student/Graduates) preferred the more urban places in Canada such as Ontario, Quebec, and British Columbia.

Alberta and British Columbia (BC) tweaked their nomination program to attract the entry level, semi -skilled in addition to the traditional skilled workers. Both provinces offer temporary to permanent migration pathways for those with the required years of experience in the tourism/hospitality, hotel and lodging, long-haul trucking, food and beverage processing, and manufacturing.

The oil price volatility in the world market and the Fort McMurray fire, however, contributed to the bleak employment scenario in Alberta. Statistics Canada reported on August 5, 2016 that “Alberta’s monthly unemployment rate climbed to its highest level in nearly 22 years in July, marking the first time the province has had a worse jobless rate than Nova Scotia.”

Manitoba distinguishes itself from the other provinces by providing extra points and preference for applicants with close relatives in the province. Close relatives include siblings, niece or nephew, aunt/uncle (maternal or paternal), first cousin, parent or grandparent.

New Brunswick offers specific pathways for applicants with qualified family members (the applicant must to be a non-dependent child, brother, sister, niece, nephew, or grandchild of the Family Supporter in New Brunswick). Your Family Supporter would also be able to provide you with on-the-ground facts about career and employment prospects, especially with the report of the Conference Board of Canada that New Brunswick is likely to join Alberta in recession this year (published by CBC New Brunswick, June 13, 2016).

Perhaps the province with the least expectation of economic recovery, Newfoundland-Labrador, the easternmost province of Canada, has had short booms and long-term busts, especially in the oil exploration and mining sectors. With the drop in oil prices and the shutting down of Labrador’s key iron mines in 2014, jobs were hard to find, even as the provincial government found itself in deficit. Maybe that was the reason why Newfoundland is one of the few provinces charging a $250 non-refundable fee for Express Entry and provincial nominee applicants.

Past halfway of 2016 reveals only a few Canadian provinces have improved in economic performance, with Manitoba and British Columbia leading the way.

Manitoba distinguishes itself from the other provinces by providing extra points and preference for applicants with close relatives in the province.

A July 2016 report by the Conference Board of Canada, noted, “Manitoba’s GDP is set to expand by 2. 1 per cent this year and 2.6 per cent in 2017, which would allow the province to be a reliable source of growth … due to strong employment and wage gains in recent years.”

The Manitoba government banks on its rich natural resources and fertile farmland for a sustained positive economic performance. Manitoba is not dependent on any single industry or commodity, although manufacturing is Manitoba’s largest sector accounting for over 12 percent of total GDP. Manitoba is home to Canada’s largest factories for furniture, doors, windows, and cabinetry. The province is also North America’s largest producer of intercity and urban buses.

Domestic spending of BC households will lead economic growth with expected renewed “substantial activity in the retail, services, and housing sectors. Exports are expected to be a key driver of BC‘s forecasted growth rate of 2.3 percent in 2017.

Processing of provincial nomination applications and subsequent permanent resident applications at the Canadian Embassy in Manila could take 1 to 2 years.

If the oil price market remains unstable and terrorism continues to plague Europe and disrupts economic activity, resulting in national sentiments against migrants, the provincial migration to global Canadian cities might be focused only on British Columbia, Manitoba, Ontario, and Quebec, provinces which have shown to have the most pull factors for migrants—Filipino city dwellers and provincial migrants included.

For the rest of us the reverse migration begins if and when Federalism begins and the killings stop.

This story was originally published by The Manila Times, Philippines