What Does Leaving No One Behind Really Mean? 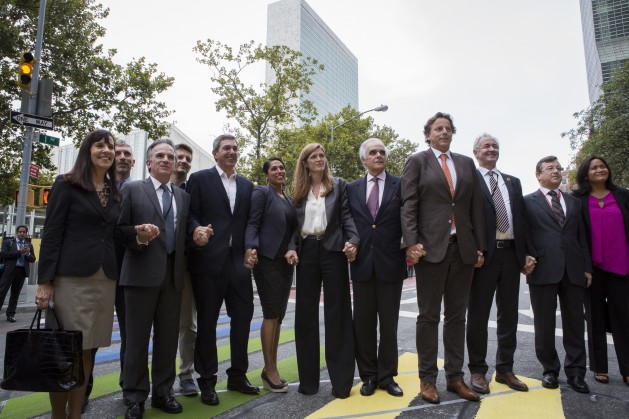 UNITED NATIONS, Sep 26 2016 (IPS) - One year after UN member states adopted the ambitious 2030 Sustainable Development Agenda their repeated vow to “leave no one behind” seems almost as idealistic and impractical as ever.

2016 has so far proved a difficult year for the UN’s objective of including the world’s most vulnerable and marginalised in development efforts.

Last week’s UN Refugee and Migration summit fell short for child refugees; Lesbian, Gay, Bisexual and Transgender (LGBT) advocates were left out of an important HIV and AIDS meeting in June and no women were voted onto an important disability committee by UN member states also in June.

Danny Sriskandarajah Secretary General of CIVICUS told IPS that the objective of leaving no one behind will require governments to consider serious changes in both policy and social norms.

“If we’re serious about finding and helping those who are furthest behind that’s not a technical exercise that’s a deeply political exercise,” said Sriskandarajah.

“If our leaders say 42 times in their agreement that they are not going to leave anyone behind we now very quickly need to find out who is being left behind,” -- Danny Sriskandarajah.

The first step, says Sriskandarajah is making sure that we identify and include those at risk of being left out.

“If our leaders say 42 times in their agreement that they are not going to leave anyone behind we now very quickly need to find out who is being left behind,” he said.

However the marginalised and excluded are not always easy to reach, Vladimir Cuk, Executive Director of the International Disability Alliance (IDA) told IPS.

“Truly for everyone means that you have implement for those that are hardest to reach, hardest to count, hardest to include in the programs, hardest to know anything about, and those are typically persons with disabilities,” he said.

Cuk noted that some efforts have been made to include persons with disabilities in the 2030 sustainable development agenda so far, a welcome change from the previous millennium development goals which did not refer to disability.

However reaching persons with disabilities will also be difficult since they are also over-represented among the extreme poor, he added.

This points to another reason why it will be difficult for UN member states to ensure no one gets left behind – different types of disadvantage and exclusion often overlap.

This is true of Indigenous peoples who are often the “minorities within the minorities,” Marama Pala Executive Director of INA (Māori, Indigenous & South Pacific) HIV/AIDS Foundation told IPS.

“Until countries address the inequalities and injustices for Indigenous Peoples reaching the Sustainable Development Goals will be impossible,” said Pala, who is also a civil society representative at UN meetings.

Yet Indigenous peoples are also at risk of being left behind because they can be adversely affected by so-called development encroaching on their land, from land grabbing for palm oil plantations to the construction of mega dams funded by multilateral development banks.

“Increasingly those communities are finding themselves in the firing line for taking a stand against the theft or destruction of their land and natural resources.”

Some forms of inequalities were considered too politically divisive to be included in the final 2030 agenda, which had to be agreed to by all 193 UN member states.

The final version of the text refers to rights “without distinction of any kind as to race, colour, sex, language, religion, political or other opinion, national or social origin, property, birth, disability or other status.”

References to sexual orientation and migration status were removed from earlier drafts in order to reach consensus.

In order to address the inequalities which leave marginalised groups behind, political, social and economic change is needed at the national level as well as the multinational level.

“Once you start to commit to something like leaving no one behind you unearth a whole bunch of economic and social exclusion that’s happening in society that’s driven by corporate greed, political corruption, social exclusion which will need serious changes in both policy and social norms if we’re to track it,” Sriskandarajah said.

The Sustainable Development Goals themselves also address inequality between countries. Efforts to address these inequalities such as through a global tax cooperation body have also been stymied to-date.