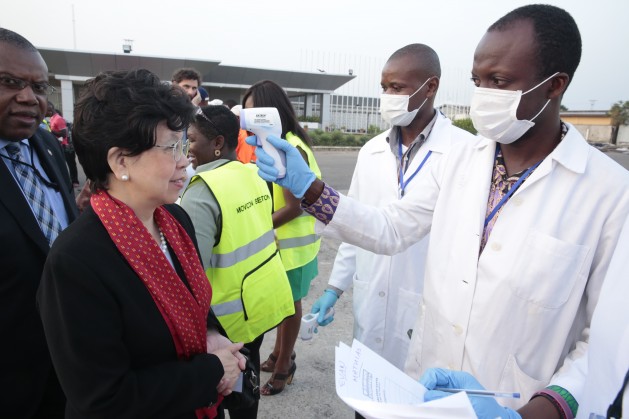 UNITED NATIONS, Oct 24 2016 (IPS) - Health problems increasingly transcend the borders of the World Health Organization’s 194 member states, a challenge which the six candidates vying to lead the global body must address with care.

Those 194 member states will pick the next Director-General of the world’s peak health body in May 2017, after the current six candidates are whittled down by the World Health Organization (WHO) Executive Board in January. The successful candidate will replace current Director-General Dr Margaret Chan, of China in July 2017.

The ninth Director-General of the world’s peak health body will play a key role in ensuring global responses to an increasingly complex and contrasting list of global health problems: the spread of mosquito borne diseases due to climate change, multi-drug resistant tuberculosis, the unfinished business of AIDS and HIV, air pollution, domestic violence, the global rise in noncommunicable diseases such as diabetes as well as the inevitable emergence of the next Ebola-like pathogen.

She, or he, will need to navigate a delicate balance between serving each of the global body’s member states while also ensuring that the world’s only global health body is greater than the sum of its parts.

“Today when we talk about WHO’s role it really transcends states, it goes into a global response category,” Esperanza Martinez, Head of the Health Unit at the International Committee of the Red Cross (ICRC) told IPS.

Yet, like any other UN body, the WHO “is no better or worse than the governments who make it up,” Susannah Sirkin Director of international policy and partnerships at Physicians for Human Rights told IPS.

The new Director-General will take over after a period of heavy soul searching for the Geneva-based organisation following deep criticism of the WHO’s handling of Ebola in West Africa.

“There is an enormous call for increased transparency and efficiency within the organisation,” said Sirkin.

In order to address emerging epidemics, such as Ebola and Zika, Martinez says that it is essential that the WHO is ready and able to spring into action.

“The fact that WHO has to wait for minsters of health and governments to qualify crisis really can delay interventions in critical moments,” said Martinez.

The new Director-General will also need to be prepared to “hit the ground running,” meaning that they should be “someone who already understands how the UN system works and how the WHO works,” she added.

“We need someone who understands the dynamics of humanitarian and emergency responses today.”

For Sirkin, the new Director-General will also need to transcend the “historic limitations” which have often seen the WHO adopt “relative silence” towards matters that are seen as within the control of national governments.

Health is politicised, said Sirkin, when governments fail “to invest to an adequate degree in the provision of both preventative and curative health care, or (fail) to invest a proportionate or reasonable amount of their national budget in health care.”

“What you need is someone who is able to lead the organisation, not to confront the states, but to challenge the states to do better," -- Esperanza Martinez, ICRC.

“The next Director-General has to really have some political courage and the ability to galvanise,” to overcome the constraints which have historically limited the WHO from speaking out.

“Somehow the WHO as an agency needs to transcend that.”

For example, she said the WHO should be able to speak out when the Syrian government “overtly obstructed the delivery of humanitarian including medical aid in an alarming way.”

She welcomed the WHO’s new role in addressing the global problem of attacks on health workers and health facilities, but noted that this is another area where the new Director-General will be required to have political courage.

Beyond humanitarian crises, the new Director-General will face many other challenges, including emerging threats such as antimicrobial resistance, as well as much older health challenges such as maternal mortality.

Two of the six candidates for the position of Director-General are women. Unlike the position of Secretary-General of the United Nations, which has always been held by men, two women, Chan and Gro Harlem Brundtland of Norway, have already led the WHO.

However although women and children’s health have been considered priorities of the UN and the WHO, Sirkin says that it is important for the WHO to do more than pay lip service to gender inequality in health, whether a man or a woman holds the role of Director-General, “especially since there is now known an enormous correlation between women’s rights and health.”

“Basic women’s rights – including reproductive rights, violence against women (and) sexual violence – over the long run is going to be a continuing enormous barrier to the development of global health,” she said.

More than half, 4 hail from Europe – Italy, France, Hungary and the United Kingdom – the other two come from Ethiopia and Pakistan. The hopefuls all share backgrounds as medical doctors, and most have extensive experience in public health or politics.