ROME, Dec 11 2016 (IPS) - Up to two billion people live in countries affected by violence, conflict and fragility. Often, such political instability goes hand in hand with food insecurity. “Conflicts have pushed over 56 million people either into crisis or emergency levels of food insecurity”, Kimberly Flowers, Director of the Global Food Security Project, said at this years’ John McGovern Lecture held at the Food and Agriculture Organization of the United Nations (FAO). The number continues to grow with the escalation of conflicts and violence in countries like Syria, Yemen or South Sudan. 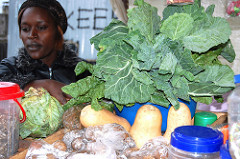 Families can no longer afford regular meals because of rising food and fuel costs. Credit: IPS

However, since the food price crisis in 2007/08 pushed the total number of hungry people to over one billion – a sixth of the worlds population – political leaders have started to pay attention to food insecurity.

Under President Obama, the United States has invested 6,6 billion dollars in “Feed the Future”, a long-term development program focusing on reducing poverty and hunger. The program aims at teaching farmers in developing countries new agricultural techniques, how to increase productivity and improve nutrition.

Kimberly Flowers underlined that in the United States, opinions on food security are not divided among party lines. The U.S Congress has enacted the Global Food Security Act this summer, a law that will ensure that global hunger and poverty remain a top U.S. foreign policy. “Food security is real and evidence based. Congress understands the importance of addressing this issue”, Kimberly Flowers told IPS.

Despite the uncertainty a Trump administration will bring with it, with the Global Food Security Act, food-security investments will continue for at least two more years.

For the first time, the U.S. intelligence community has recognized the linkage between political instability and food insecurity and has assessed that the overall risk of food insecurity in many countries will increase during the next ten years because of production, transport and market disruptions to local food availability.

“Food insecurity is both the cause and consequence of conflict”, Kimberly Flowers told the audience, linking it with political stability and calling food insecurity a “national security imperative”.

The lack of access to food can be used as a strategic instrument of war. “Hungry populations are more likely to express frustration with troubled leadership, perpetuating a cycle of political instability and further undermining long-term economic development”, Kimberly Flowers said.

In Syria, President Bashar al-Assad as well as the Islamic State have used food or the absence of food as war tactics, deliberately cutting off Syrians from humanitarian assistance or offering starving citizens food in return for them to join their ranks. The war has devastated Syria’s agriculture and has cost the country 35 years of development. Its food production is at a record low as farmers are unable to hold on to, let alone cultivate their land.

In Nigeria, food insecurity has risen as a result of instability and especially affects areas where Boko Haram operates. “Boko Haram’s actions are preventing food production; they have placed landmines in farmer’s fields, stolen cattle, and forced civilians to flee, leaving land unfarmed”, said Kimberly Flowers. The result is that certain areas are deprived of their harvest, and where food is available, prices have increased drastically.

In Venezuela, on the other hand, food insecurity is linked to economic mismanagement. “90 per cent of Venezuelans report that food has become too expensive to buy”, said Kimberly Flowers. Once a rich country with strong leadership, Venezuela’s dependence on oil revenues has brought the economy to the verge of collapse after a global drop in oil prices. As the population grows hungry, the government has resorted to increasingly authoritarian response tactics.

In South Sudan, conflicts between the government and oppositional groups have had such an impact on the economy that food prices increased dramatically. The denial of food and food aid has played a central part in countering insurgencies in the country. Up to 95 per cent of the population in South Sudan depends on agriculture to survive, “yet there is no underlying state infrastructure to support the agricultural industry”, Kimberly Flowers said. “The dangerous combination of armed conflict, weak infrastructure and soaring staple food prices could result in famine conditions.”

In 2015, the international community has adopted 17 key objectives to be achieved by 2030, known as the Sustainable Development Goals (SDGs). The first two goals are to eradicate poverty and hunger. But can these goals really be achieved when instability and conflict are constant threats?

“The SDGs underestimate the difficulties of helping more than a billion people to regain a sustainable path of economic growth and reconstruct a torn social fabric within a short 15 years”, said Kimberly Flowers. To believe that hunger and poverty can completely be abolished within the next 14 years is unrealistic. However, the efforts to implement the SDGs will have a sustainable impact on the countries in need of help. For example on food insecurity: “The number of food insecure people is projected to fall significantly, 59 per cent, by 2026.”

Kimberly Flowers believes that the most important factors to decrease food insecurity are a strong government and keeping agriculture high up on the development agenda.