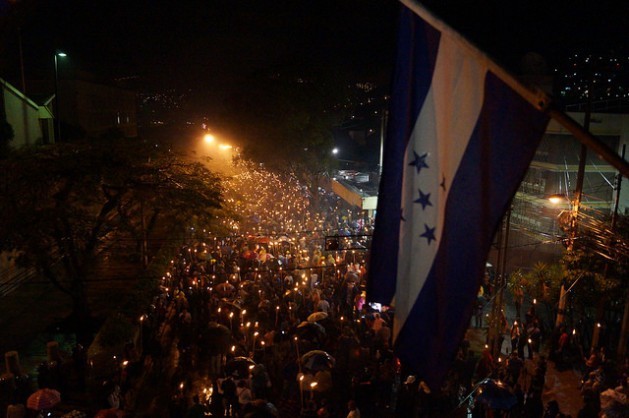 The rain has not stopped the ever-growing weekly torch marches organised by the Outraged Opposition citizen movement in the capital of Honduras and 50 other cities around the country. The peaceful protests are demanding the creation of International Commission Against Impunity, to combat corruption and strengthen democracy. Credit: Thelma Mejía/IPS

BERLIN, Jan 25 2017 (IPS) - 2016 showed that around the world systemic corruption and social inequality reinforce each other, leading to popular disenchantment with political establishments and providing a fertile ground for the rise of populist politicians, warns a new report by an international anti-corruption watchdog.

In its report Corruption Perceptions Index 2016, released on Wednesday Jan. 25, Transparency International (TI) says that 69 per cent of the 176 countries scored below 50, on a scale from 0 (perceived to be highly corrupt) to 100 (perceived to be very clean), exposing how massive and pervasive public sector corruption is around the world.

This year, more countries declined in the index than improved, showing the need for urgent action, reports this global movement with one vision — a world free of corruption — working in more than 100 countries.

‘With the launch of Transparency International’s Corruption Perceptions Index 2016 just five days after Donald Trump’s inauguration as US President, it’s timely to look at the links between populism, socio-economic malaise and the anti-corruption agenda.’ - Finn Heinrich

As the Panama Papers showed, TI adds, it is still far too easy for the rich and powerful to exploit the opaqueness of the global financial system to enrich themselves at the expense of the public good.

“In too many countries, people are deprived of their most basic needs and go to bed hungry every night because of corruption, while the powerful and corrupt enjoy lavish lifestyles with impunity,” said José Ugaz, Chair of Transparency International.

“We do not have the luxury of time. Corruption needs to be fought with urgency, so that the lives of people across the world improve,” added Ugaz.

Grand corruption cases, from Petrobras and Odebrecht in Brazil to Ukrainian ex-President Viktor Yanukovych, show how collusion between businesses and politicians denies national economies of billions of dollars of revenues that were siphoned off to benefit the few at the expense of the many, TI stressed.

“Brazil’s score on the index, for example, has significantly declined compared to five years ago as one corruption scandal after another involving top politicians and businesspeople was uncovered. Yet the country has shown this year that through the work of independent law enforcement bodies it is possible to hold to account those previously considered untouchable.”

People are fed up by too many politicians’ empty assurances to tackle corruption and many are turning towards populist politicians who promise to change the system and break the cycle of corruption and privilege. “Yet this is likely to only exacerbate the issue.” 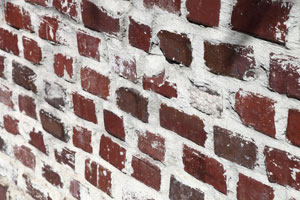 Land grabbing by the so-called “land mafia” is reportedly prolific in Pakistan, particularly in and around Islamabad, Lahore and Karachi. In some cases, housing authorities have allegedly colluded with property developers, who employ private militias to secure the land. Photo: Transparency International.

“In countries with populist or autocratic leaders, we often see democracies in decline and a disturbing pattern of attempts to crack down on civil society, limit press freedom, and weaken the independence of the judiciary. Instead of tackling crony capitalism, those leaders usually install even worse forms of corrupt systems,” said Ugaz.

“Only where there is freedom of expression, transparency in all political processes and strong democratic institutions, can civil society and the media hold those in power to account and corruption be fought successfully.”

The index scores of Hungary and Turkey – countries that have seen the rise of autocratic leaders – have dropped in recent years. In contrast, the score of Argentina, which has ousted a populist government, is starting to improve.

What Needs to Be Done

Technical fixes to specific anti-corruption legislation are not enough, according to TI, a world movement that, from villages in rural India to the corridors of power in Brussels, aims to gives voice to the victims and witnesses of corruption.

“What is urgently needed are deep-rooted systemic reforms that even up the growing imbalance of power and wealth by empowering citizens to stop the widespread impunity for corruption, hold the powerful to account, and have a real say in the decisions that affect their daily lives.” 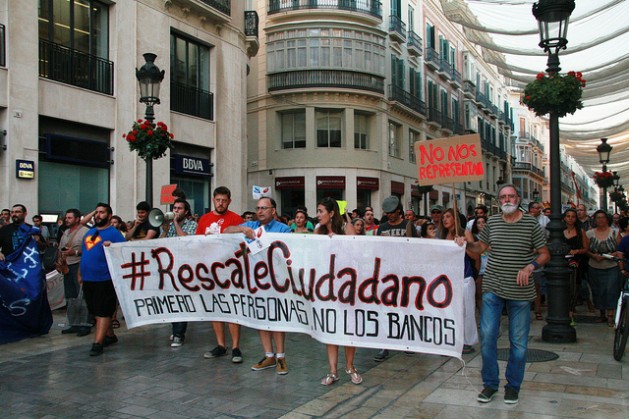 “You do not represent us” says one demonstrator’s sign in a street protest in Málaga in southern Spain. Credit: Inés Benítez/IPS

These reforms, adds TI, must include the disclosure through public registries of who owns companies as well as sanctions for professional enablers who are complicit in moving corrupt money flows across borders.

Denmark and New Zealand performed best with scores of 90, closely followed by Finland (89) and Sweden (88). Although no country is free of corruption, the countries at the top share characteristics of open government, press freedom, civil liberties and independent judicial systems, according to TI.

For the tenth year running, Somalia is the worst performer on the index, this year scoring only 10. South Sudan is second to the bottom with a score of 11, followed by North Korea (12) and Syria (13). Countries at the bottom of the index are characterised by widespread impunity for corruption, poor governance and weak institutions.

Countries in troubled regions, particularly in the Middle East, have seen the most substantial drops this year. Qatar is the biggest decliner compared to the 2015 index with a drop of 10 scores. “The FIFA scandals, the investigations into the decision to host the World Cup in 2022 in Qatar and reports of human rights abuses for migrant workers have clearly affected the perception of the country,” said Ugaz.

TI’s Finn Heinrich commented that with the launch of Transparency International’s Corruption Perceptions Index 2016 just five days after Donald Trump’s inauguration as US President, it’s timely to look at the links between populism, socio-economic malaise and the anti-corruption agenda.

“Indeed, Trump and many other populist leaders regularly make a connection between a ‘corrupt elite’ interested only in enriching themselves and their (rich) supporters and the marginalisation of ‘working people’.”

Is there evidence to back this up? Heinrich asks, and answers “Yes. Corruption and social inequality are indeed closely related and provide a source for popular discontent. Yet, the track record of populist leaders in tackling this problem is dismal; they use the corruption-inequality message to drum up support but have no intention of tackling the problem seriously.”