Inequality and Its Discontents

Jomo Kwame Sundaram was an Assistant Secretary-General for Economic and Social Development in the United Nations system during 2005-2015, and received the 2007 Wassily Leontief Prize for Advancing the Frontiers of Economic Thought. 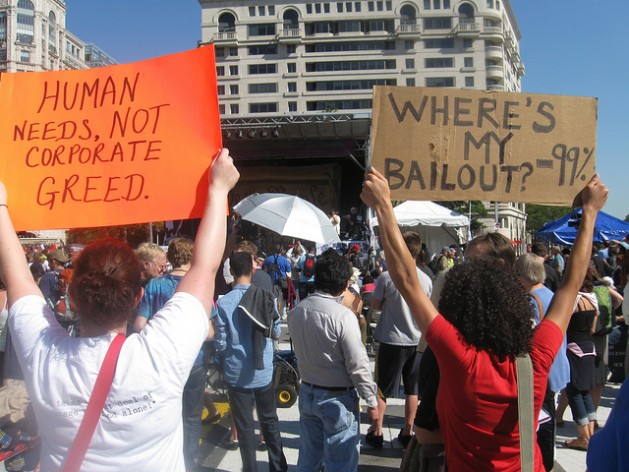 Although class has not declined in significance, by shaping the institutional context, political geography has become a key determinant of income. Credit: IPS

KUALA LUMPUR, Malaysia, Nov 17 2016 (IPS) - Global income inequality among different regions began to increase about five centuries ago, before accelerating about two centuries ago, according to the great economic historian Angus Maddison. After the brief reversal during the ‘Golden Age’ quarter century after the Second World War, higher commodity prices in the decade until 2014, despite protracted slowdowns in most rich countries following the 2008 financial crisis, reduced international disparities between North and South.

Short 20th century
National income distribution trends do not necessarily follow those for global income inequality. National level inequality in 22 developed economies grew up to the second decade of the 20th century, with inequality declining thereafter until the 1970s. The trend then reversed again with the market fundamentalist counter-revolution and changing role of the state in recent decades.

The general trend for these countries is quite clear, but does not hold for all other countries. For example, many developing countries fared badly in the 1920s and 1930s as primary commodity prices fell, especially during the Great Depression.

The late historian Eric Hobsbawm famously described the period from the Bolshevik Revolution in 1917 to the collapse of the Soviet Union in 1991, as the ‘short twentieth century’. Other pundits identify the end of the First World War, or the creation of the ILO in 1919, as an alternative starting point for Karl Polanyi’s ‘second movement’.

For many, the ascendance of Margaret Thatcher and Ronald Reagan led the ‘neo-liberal’ counter-revolution against the post-World War Two ‘Golden Age’ marked by decolonization, Keynesianism, the welfare state, agrarian reforms and rapid employment expansion.

Washington Consensus
The ‘Washington Consensus’ from the early 1980s – shared by different branches of the US government and the Bretton Woods institutions located in the American capital – brought an end to earlier policy interventions associated with Keynesian and development economics.

The breakdown of the international monetary system and other developments of the 1970s led to ‘stagflation’ – economic stagnation despite high inflation — in much of the West while growth accelerated in other regions, notably East Asia. The US Fed raised interest rates sharply from 1980, inducing an international recession, and eventually, fiscal and sovereign debt crises in some developing countries and ‘communist’ economies. High debt and the Volcker-induced interest rate spike forced many governments to pursue macro-financial stabilization policies to defeat inflation besides microeconomic structural adjustment policies.

But the so-called Washington Consensus was not really about market liberalization, as little was done to check, let alone undermine private oligopolistic and oligopsonistic trends. Instead, despite the market rhetoric, neo-liberalism is really about strengthening property rights and capturing rents.

This involved a shift away from public authority and coordination, redefining the role of the state and enhancing private power. Good governance in the new order means upholding the rule of law, especially strengthening property rights and related privileges and entitlements. To secure political support, it appeals to all as consumers, and to all asset-owners, including petty ones and rentiers seeking to maximize net income flows by minimizing rent-seeking costs. Not surprisingly then, recent trends in the functional distribution of income reflect a declining share for labour despite rising labour productivity.

Labour solidarity?
This disconnect between labour productivity and income is not unfamiliar to developing economies with high unemployment and underemployment. In such labour markets, characterized by ‘unlimited supplies of labour’ associated with economics laureate Arthur Lewis, productivity gains did not translate into higher wages, or a ‘producer surplus’, but instead lowered prices, contributing to the ‘consumer surplus’. This contrasts sharply with strong labour market institutions where wages rise with productivity.

Growing wealth concentration in recent decades reflects enhanced rentier power in most economic sectors and activities as well as the ascendance and globalization of finance in recent decades. Rentier income flows from legally sanctioned monopolies associated with intellectual property rights have grown greatly in recent years, increasingly capturing productivity gains at the expense of labour.

Although class has not declined in significance, by shaping the institutional context, political geography has become a key determinant of income. This not only helps explain the continuing strong economic incentive for international migration, but also the growing barriers to such movement, often supported by those who feel threatened about losing their privileges.

Not surprisingly, international labour solidarity has become much more difficult, while foreign advocacy of labour rights or the environment is treated with suspicion as self-interested, or even as protection by another name.