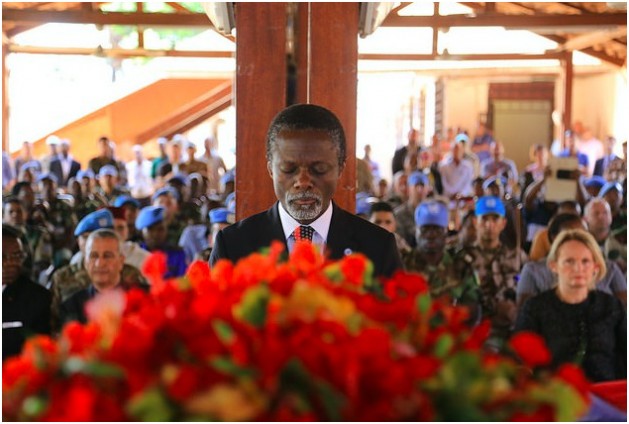 A memorial service for a UN peacekeeper, Corp. Khalid El Hasnaoui of Morocco, April 20, 2016, in the Central African Republic. Parfait Onanga-Anyanga, above, leads the mission there. Credit: UN PHOTO

UNITED NATIONS, Apr 18 2017 (IPS) - The Trump administration, buoyed by a powerful anti-internationalist movement among conservative Republicans in the United States Congress, is headed for a new confrontation with the United Nations over who decides how much the US should pay for peacekeeping.

With a tentative US budget deadline of April 28 fast approaching, it is almost certain that American arrears will mount again, after the Obama administration closed the funding gap.

At the same time, a broad campaign against UN peacekeeping, reflecting current thinking in the US government, is also being waged in the Security Council by Ambassador Nikki Haley.

In her short time on the Council, she has never missed an opportunity to declare that the US will pay no more than 25 percent of the peacekeeping budget, down from about 28 percent. Haley, whose formal education is in accountancy, has also said that she will be looking hard at UN peacekeeping missions to cut costs, although this is still part of a learning curve for her.

Until recently, Haley seemed surprised to hear that troop-contributing countries were compensated by the UN for use of their soldiers.

The US position today is part of an historical cycle of standoffs that began in the 1980s and peaked during the administration of Bill Clinton in the mid-1990s. That is when an earlier wave of anti-internationalism, led most prominently by the late Senator Jesse Helms of North Carolina, exerted its influence.

As chairman of the Senate Foreign Relations Committee, Helms reveled in disparaging and insulting the UN, while forcing a politically weakened Clinton to make significant changes in US institutions working in international affairs, including the abolition of an independent Arms Control Agency.

At the time, the US contribution to the annual peacekeeping budget was assessed by the UN at about 31 percent, down from just under 40 percent assessed in the early years of the world body. In 1995, however, Congress passed a law putting a cap of 25 percent on payment of UN peacekeeping dues, and arrears in hundreds of millions of dollars began to accumulate.

By 1999, when the US was in danger of losing its vote in the UN General Assembly, the Helms-Biden agreement (Joseph Biden, a senator then, was the ranking Democrat on the committee) set up a timetable to start paying $926 million in arrears to the UN and other international organizations.

The UN-US calculations and gaps have seesawed ever since. In the early years of the George W. Bush administration, the US cap was raised several times by Congress as arrears were being reduced. In fact, when Barack Obama assumed the presidency in 2009, the US budget cap on payments was higher, at 27.1 percent, than the UN assessment of 25.9 percent.

At the end of the Obama years, the US payment ceiling was set at 28.57 percent, according to figures from the UN Department of Peacekeeping Operations. The UN assessment stood a little lower, at 28.3 percent.

Payments to the UN are drawn from sections of the US State Department budget, which Trump has promised to slash by about 31 percent, a figure that Congress, which writes the budget, is likely to oppose — or temper. The UN’s peacekeeping budget for 2016-2017 was $7.2 billion to $7.89 billion, depending on whose figures are used.

A Republican-led Congress — especially the House of Representative — could argue that all the adjustments made over the years were one-off annual temporary measures that merely tinkered with the 1995 law capping US payments to peacekeeping at 25 percent. Along those lines, all that Congress would have to do is reaffirm the 1995 legislation to meet Trump’s 25 percent. The US would automatically fall back into default.

To describe the process by which the UN sets assessment and dues scales as Byzantine would be making it sound easy. It starts with the UN Charter, which mandated in Article 17 that all member nations contribute to budget expenses. There has been no dispute since 2000 over US dues to the UN’s regular operating budget, for which the US is assessed 22 percent, the highest payment of any nation. The American issue is with peacekeeping dues only.

In assessing peacekeeping rates, the central role is played by the 18-member UN General Assembly Committee on Contributions (separate from the Advisory Committee on Administrative and Budgetary Questions, the ACABQ, which a previous Take a Look report on the US-UN budget crisis erroneously said was responsible).

Peacekeeping dues are calculated from the base of each nation’s regular budget assessments. A number of factors are then taken into account, including the strength of the national economy, measured in gross national income (GNI) and GNI per capita. Some poor countries receive a discount on their regular budget rate.

The biggest discounts go to least-developed countries (LDCs) , which get 90 percent knocked off their regular budget rate when peacekeeping dues are decided. Countries with high per capita income get no discount.

The permanent five members of the Security Council, or P5 — Britain, China, France, Russia and the United States — are a special case. Those nations, which can veto or alter proposed peacekeeping resolutions and other measures in the Council, are assessed at a premium rate.

This means that the sum of all discounts given to other countries are added pro rata to the regular budget rates of the P5 to determine what they will be charged for peacekeeping.

Peacekeeping rates and discounts may be recalculated and changed only every three years by the General Assembly, based on advice from the Committee on Contributions. The next major review takes place in 2018. Until then, annual “technical” reviews are held. The 2017 session for this year’s review is in June.

The US government will have to adhere to these timetables and work with the UN in New York throughout the coming months. But as the rules stand now, no major changes can be made on rates until the next three-year review.

The US will remain the world’s largest economy during this period, and there will not be much sympathy around the UN for the Trump administration as the dues argument burgeons. The US already pays less than it should because of previous budget deals.

Even before the Trump cuts kick in, only 1.4 percent of the US federal budget is devoted to foreign aid of all kinds. Within that total, American peacekeeping and regular budget dues to the UN combined account for a minuscule 0.2 percent of the US national budget.