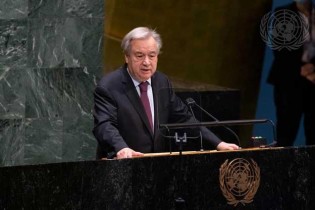 By Barbara Crossette
For the first time since a new development agenda was adopted in 2015 to make the world a better place for everyone, government leaders assembled at the United Nations in late September to take stock of progress. The verdict of this summit was not good.

By Barbara Crossette
The Sustainable Development Goals (SDGs) are in trouble. United Nations officials are concerned and say so publicly. Secretary-General António Guterres joined in raising an alarm in mid-July when he introduced the most recent official UN report.

By Barbara Crossette
Amid a busy December, when the United Nations was focusing on important conferences on climate change and migration and year-end holidays loomed, a case of harassment that never got the traction it arguably deserved ended in a traditional UN way: it disappeared.

By Barbara Crossette
When Maleeha Lodhi arrived at the United Nations in 2015 as Pakistan’s ambassador, she brought with her a broad background in academia, journalism and diplomacy: a Ph.D. in political science from the London School of Economics, where she later taught political sociology; the first woman to edit major newspapers in Pakistan; ambassador to the United States twice and once as Pakistan’s high commissioner in London.

By Barbara Crossette
Five months into her stint as United States ambassador to the United Nations, Nikki Haley faced two days of often-sharp questioning on June 27 and 28 by influential panels of the United States Congress. They demanded justification for the Trump administration’s decision to slash funding to the United Nations, particularly cuts to the UN Population Fund, Unicef, UN Women and the World Food Program.

By Barbara Crossette
Speaking to the United Nations Security Council at a meeting on North Korea held at the foreign-minister level, Secretary of State Rex Tillerson asked member countries to join the United States in a strong campaign to enhance pressures on the Kim Jong-un regime, whose rapidly developing nuclear and missile programs have reached dangerous levels.

By Barbara Crossette
The Trump administration, buoyed by a powerful anti-internationalist movement among conservative Republicans in the United States Congress, is headed for a new confrontation with the United Nations over who decides how much the US should pay for peacekeeping.
ADVERTISEMENT ADVERTISEMENT