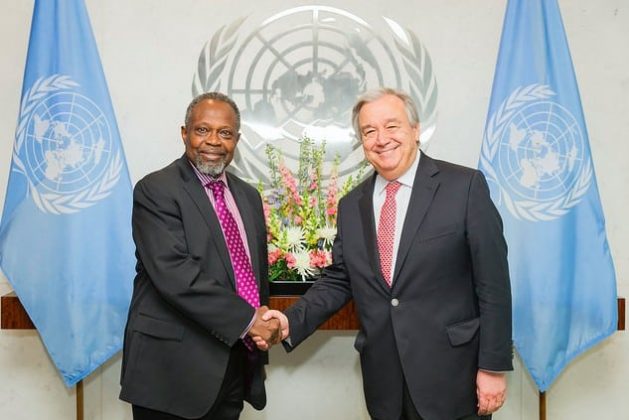 UN Secretary-General António Guterres, right, and Kingston Rhodes, chairman of the International Civil Service Commission, a regulatory body of the UN, April 13, 2017. Rhodes, from Sierra Leone, retired a few weeks early from his job in December, amid allegations he had engendered a hostile workplace for women.

Jan 7 2019 - Amid a busy December, when the United Nations was focusing on important conferences on climate change and migration and year-end holidays loomed, a case of harassment that never got the traction it arguably deserved ended in a traditional UN way: it disappeared.

On Dec. 14, the chairman of the International Civil Service Commission, which regulates salaries and working conditions for staff members across the vast UN system, quietly resigned, after a year of dodging allegations that he had created a hostile and “unhealthy” environment for women who rejected his sexual advances.

The chairman of the commission, Kingston Rhodes of Sierra Leone, who held the rank of UN under secretary-general, was due to retire at the end of 2018, when his second term ended. His sudden, early resignation was exactly what the women who filed a complaint feared: Rhodes hung on and walked free. Four of those women had aired their allegations in a letter to Secretary-General António Guterres.

Rhodes’ staff even organized a farewell party for him, in place of a holiday party, and employees were urged to help defray the costs.

Thalif Deen, a correspondent at the UN for Inter Press Service, who was almost alone in his persistent reporting on the harassment story, wrote on Dec. 14 what women working for the commission had been predicting, “The UN’s heavily-hyped ‘zero tolerance’ policy on sexual abuse is being ridiculed once again.”

Equality Now, an international organization advocating for women’s rights, had been following the case for more than a year, since the allegations surfaced in November 2017. The organization had also formally asked for intervention by Guterres, who was reported to have said he found the allegations made by the women on the commission staff “credible.”

One complainant was Shihana Mohamed, a human-resources policies officer on the commission. In an interview with PassBlue last summer, she discussed several systemwide principles that she charged had been violated by Rhodes, who had created a “hostile” and threatening working environment.

While Rhodes — as an elected, not appointed, official — was not required to abide by some employee rules, one that he had at least publicly endorsed was a systemwide UN code of conduct. Under the heading “Harassment and abuse of authority,” it says:

“International civil servants must not abuse their authority or use their power or position in a manner that is offensive, humiliating, embarrassing or intimidating to another person.”

The International Civil Service Commission, which has 15 commissioners from around the world and a staff of about 40 people, is not a remote body based far from the UN. It is across the street from UN headquarters in a building housing other UN offices. Yet for months, the UN Secretariat, including the office of the secretary-general, took the position that technically, the commission was an independent entity, having been created by the General Assembly and fully in charge of its own affairs.

Equality Now took issue with that explanation from the start. Yasmeen Hassan, the organization’s global executive director, said in a letter to Guterres in July, endorsed by nine other advocacy groups, “You are in a unique position to defend your staff against harassment, physical and psychological, by any others in the United Nations workplace.”

Although the complaint filed in November 2017 could have been acted on quickly, it took five months for the Office of Internal Oversight Services, the UN’s investigative arm, to begin considering the case and apparently to decide whether it had standing to investigate the commission.

When the investigation began, another seven months elapsed before it issued a report, according to the Inter Press Service, which has a global readership. The findings were sent to the commission in mid-December 2018 and have not been made public by that body or by the Secretariat.

Throughout the time that Rhodes was under investigation, he carried on blithely ignoring the complaints. For example, in a speech on July 9, he congratulated himself on the successes of his tenure.

“Twelve years ago when I was first appointed Chair of the Commission, I set out my vision for a revitalized Commission, which would reassert its leadership role and deepen engagement with the overall reform taking place in the organizations of the United Nations common system,” he said.

“At the time, I urged members of the Commission to recommit to the concept of a unified, high performing, merit-based international civil service which emphasizes and rewards performance. . . . Looking back, I take pride in seeing how much has been accomplished and the extent to which we were able to realise that vision together.”

Rhodes was allowed to continue in his post without interference from fellow commissioners or Guterres until less than two weeks from his scheduled retirement date. The details of what prompted his unexpected — earlier (so to speak) — resignation have not been made public.

He will be replaced as chairman by Larbi Djacta of Algeria. A member of the commission, Djacta is a diplomat who has also worked with UN peacekeeping.

After the resignation of Rhodes was announced, Shihana Mohamed, the complainant noted above and a leading figure in the campaign to expose the difficult conditions for women at the commission, publicized the details of her own experiences in a statement to Equality Now. She said, in an abridged version of her story:

“I was sexually harassed by the Chairman of the ICSC, Mr. Kingston Rhodes, for over 10 years — and I was not the only one,” Mohamed said. “Because I said NO to his repeated sexual advances, Mr. Rhodes denied me promotions, and excluded me from duty travels, training, assignments, projects, Commission sessions and working groups. In 2016, I was on sick leave for 3 months due to the stress caused by the hostile office environment and retaliation by the ICSC management.

“His quiet resignation just two weeks before the end of his term is a slap in my face and barely a slap on his wrist.”

Related posts:
1. Data Miners See Poverty Gradations; and More Cases of Harassment at the UN
2. The UN and #MeToo: All Forms of Abuse Must End Now
3. US Immigration Ban Stirs Controversy at the Annual UN Women’s Forum