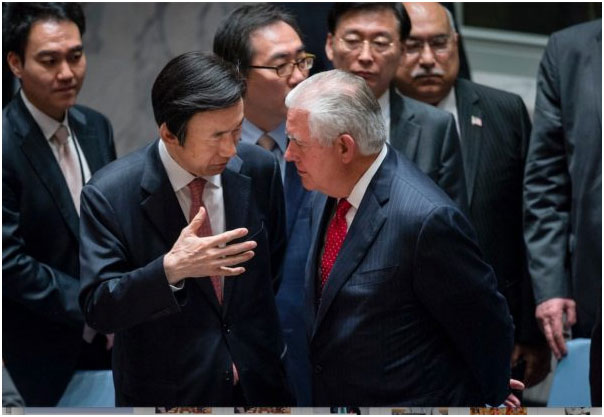 UNITED NATIONS, Apr 29 2017 (IPS) - Speaking to the United Nations Security Council at a meeting on North Korea held at the foreign-minister level, Secretary of State Rex Tillerson asked member countries to join the United States in a strong campaign to enhance pressures on the Kim Jong-un regime, whose rapidly developing nuclear and missile programs have reached dangerous levels.

The high-level diplomatic session took place on April 28, the final day of the American presidency of the Security Council, a monthly rotating position. The atmosphere signaled that the US was back and needed partners after months of disparaging the UN and insulting various UN member countries.

All 15 Council members read statements at the session, in addition to South Korea’s foreign minister, Yun Byung-se. North Korean diplomats did not participate in the Council session. But as if to underline the menacing if predictable behavior of the regime, it fired a missile, which apparently failed, not long after the Council’s meeting ended.

The tone of Tillerson’s address to the Council was much more measured than the freewheeling style of Nikki Haley, the US ambassador to the UN, who said on her first day in the job that she would “take names” and later threatened to use her high heels for kicking those who opposed American policies. (The heels reference was used when she was governor of South Carolina, referring to labor organizers.)

She also compared the UN with the South Carolina state legislature for its clubbiness when she was governor, yet she promoted a fellow state governor to become head of the UN’s World Food Program. PassBlue obtained the letter she wrote to UN Secretary-General António Guterres.

Haley had promised to “fix” things at the UN as well. “I like to fix things,” she told the US Senate Foreign Relations committee at her confirmation hearing in January.

Hints that a new approach by the US toward world politics may be forming, perhaps led by Tillerson, followed a week of extraordinary chaos in an already chaotic White House. President Donald Trump, still lacking a coherent foreign policy of his own, flailed around for a single domestic success he could advertise on his 100th day in office.

He tried and failed again to get a new national health care bill and threw out an ill-considered American tax-reform outline that ran into a buzzsaw of criticism from experts who called it a gift to the rich.

The week of chaos began on April 24 with a White House lunch for all Security Council ambassadors and their spouses, in which the idea of a presidential “we need you” surfaced and praise for the UN Secretary-General Guterres was made by Trump, according to a diplomat at the meeting. Tillerson was not present at the lunch, but Haley sat at the president’s side.

Curiously, Trump tried to make a joke about her tenure in New York, thanking her for her “outstanding leadership” and then asking Council members: “Does everybody like Nikki? Because if you don’t she can easily be replaced. No, we won’t do that. I promise.”

Still, Trump inadvertently raised suspicions about whether Haley will be reined in by Tillerson, who is slowly but surely reorganizing his department and takes a cautious approach to his diplomacy so far. Reports soon emerged that Haley may be required to have her public statements pre-approved by the State Department, but whether she agrees remains to be seen.

Four days later, on April 28, Tillerson’s message in the Security Council session on North Korea was about partnership, stressing not only American fears — the stock rhetoric of the Trump White House — but also the anxieties of Asian nations and the wider world. “The more we bide our time, the sooner we will run out of it,” Tillerson said to a chamber full of UN ambassadors, whom he thanked for their presence. “I urge this Council to act before North Korea does.”

Tillerson’s demand for action — beginning “today,” he said — included familiar complaints from Washington; for example, doing a better job of enforcing UN resolutions aimed at bringing North Korea to a nuclear stand-down. He called for new financial sanctions on anyone, individual or country, who is supporting or abetting North Korea in its nuclear and missile development — thus defying the sanctions regime, the strictest set imposed by the UN on a member country. No higher-level sanctions on, say, digital activities that violate UN penalties, were mentioned.

He also asked all 193 UN member nations to “suspend or downgrade diplomatic relations with North Korea,” saying that the regime of Kim Jong-un was exploiting its diplomatic openings and privileges to fund its technology programs, particularly for its military. And he emphasized the importance of imposing bans on North Korean imports, especially coal. He called for suspending the guest-worker program that bring laborers into various countries who can become agents of the Kim Jong-un regime.

He singled out China. “We must all do our share, but with China accounting for 90 percent of North Korean trade, China alone has economic leverage over Pyongyang that is unique, and its role is therefore particularly important,” Tillerson said. “The US and China have held productive exchanges on this issue, and we look forward to further actions that build on what China has already done.”

Foreign Minister Wang Yi of China, in his address to the Council, refused to accept that it was up to his country alone to solve the North Korea problem. “The key to solving the nuclear issue on the peninsula does not lie in the hands of the Chinese side,” he said. China has preferred to deal with the North Korea issue in multination talks, although these have gained little ground in the past.

The Chinese minister told the media before the Council session that his country’s priorities are denuclearization of North Korea, upholding the nonproliferation regime there, peace talks and not to allow “chaos or war to break out on the peninsula.”

Tillerson repeated the long-held position that “all options” were on the table in dealing with North Korea, as Vice President Mike Pence repeated throughout his trip to Northeast Asia.

“Diplomatic and financial levers of power will be backed by a willingness to counteract North Korean aggression with military action, if necessary,” Tillerson said. But he did not repeat Trump’s recent offhand remark that he would meet with Kim Jong-un if the situation required it. Nor did he refer to the cyberwarfare powers that the US has at its disposal, which Washington does not confirm or deny have been used to abort or destroy North Korean missiles after their launchings.

Russia, for its part, emphasized the toll that sanctions took on ordinary North Koreans and said that although Russia was united in condemning in North Korea’s missile launchings, the government won’t give up its nuclear program as long as it feels threatened by US naval exercises in the region.

He pointed out that these actions have violated numerous international agreements, including maritime law and aviation regulations.

Moreover, Guterres said, “The International Atomic Energy Agency remains unable to access the DPRK [Democratic People’s Republic of Korea] to verify the status of its nuclear program,” though it does have sophisticated satellite monitoring in place.

“The DPRK is the only country to have conducted nuclear tests in this century,” Guterres noted. “We must assume that, with each test or launch. The DPRK continues to make technological advances in its pursuit of a military nuclear capability. . . . The onus is on the DPRK to comply with its international obligations. At the same time, the international community must also step up its efforts to manage and reduce tensions.”

In his concluding remarks, speaking as the US representative and not the Council presiding officer, Tillerson re-emphasized the crucial importance of a truly international effort beyond the calls for more negotiations.

“And that is why we must have full and complete compliance by every country to the resolutions that have been enacted by this body in the past — no relaxation in the vigorous implementation of sanctions. . . . Any failure to take action diminishes your vote for these resolutions of the past, and diminishes your vote for future resolutions, and it devalues your seat at this Council. We must have full, complete compliance by all members of the Council.”

Leaving the Council after the hourslong session and skirting the media throng outside the chamber, Tillerson walked with Haley to the US mission to the UN across the street, where Council members were treated to lunch.