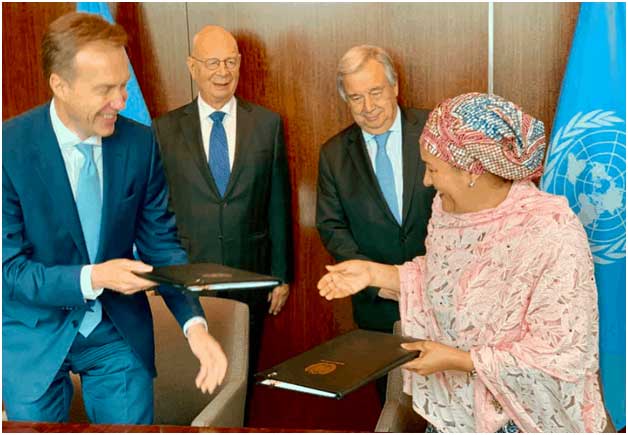 Amina Mohammed, right, the deputy secretary-general of the UN, signed a partnership agreement with the World Economic Forum, led by Borge Brende, left, to speed up progress on the Sustainable Development Goals. António Guterres, the UN secretary-general (behind Mohammed) and Klaus Schwab, the Forum’s chief executive, joined the ceremony in June.

UNITED NATIONS, Jul 25 2019 (IPS) - The Sustainable Development Goals (SDGs) are in trouble. United Nations officials are concerned and say so publicly. Secretary-General António Guterres joined in raising an alarm in mid-July when he introduced the most recent official UN report.

“It is abundantly clear that a much deeper, faster and more ambitious response is needed to unleash the social and economic transformation needed to achieve our 2030 goals,” he wrote. Separately, a mammoth, 478-page study by independent experts drove the message home with extensive data to illustrate the crisis.

The experts’ report, a joint project of the Bertelsmann Stiftung in Germany and Sustainable Development Solutions Network in New York, reveals some bleak findings: progress has been uneven at best, and in some cases has been reversed.

The study found that all nations were performing worst on addressing climate change, and no country has achieved a “green” rating. Many obstacles to success or the causes of reversals included tax havens, banking secrecy, poor labor standards, slavery and conflict.

Half the nations of the world are not on track to eradicate extreme poverty, a major — if not the primary — objective of the goals, the report found. Action on the SDGs, which were adopted in 2015 as the 2030 Agenda, are nearing their fifth year of implementation.

The most striking prediction of potential failure has, perhaps surprisingly, come from the top UN official in Asia. On July 18, the head of the Bangkok-based regional commission for Asia and the Pacific (Escap), Armida Salsiah Alisjahbana of Indonesia, warned in a UN News radio interview while attending a high-level UN forum on development in New York that her region was on track to miss all the goals.

The area covers a vast swath of the globe, stretching from the eastern Mediterranean to the Pacific rim, home to 60 percent of the world’s 7.7 people. China, India and Indonesia alone account for nearly three billion people. Alisjahbana, a UN under secretary-general, said that Escap’s latest survey showed some evidence that the region is going backward, particularly in water resources and environmental sustainability.

At UN headquarters, one controversial and much-debated response to the crisis has been to team up in a “strategic partnership” with the World Economic Forum. This institution, founded in 1971 by Klaus Schwab, a German economist and engineer, is best known for its annual star-studded, invitation-only get-togethers in Davos, a Swiss mountain resort, which attracts government officials, business leaders and celebrities.

In announcing the partnership with the UN in a broad statement of intent with few details, the World Economic Forum claimed that it can “accelerate the implementation of the 2030 Agenda for Sustainable Development.”

It defines itself as “the international organization for public-private cooperation” and lists six areas where the UN partnership can boost the development goals: in financing the 2030 Agenda and in addressing climate change, health, digital cooperation, gender equality and education.

The Forum has been steadily expanding its international presence through convening “thought leaders” around the world on topical issues, to exchange ideas and build influential networks on economic, industrial and social initiatives.

Deputy Secretary-General Amina Mohammed signed the joint framework agreement for the UN with Borge Brende, the Forum’s president. Guterres and Klaus Schwab, the Forum’s executive chairman, were onlookers at the ceremony on June 13.

Mohammed, who led the formulation of the SDGs, has dominated the UN’s development agenda, sidelining the UN Development Program.

She was a strong proponent of creating the SDG package on the advice and consent of governments — bottom-up from the field, not top-down as the Millennium Development Goals were written in 2000 by international development specialists in and around the office of Secretary-General Kofi Annan.

Through the new UN-World Economic Forum, Mohammed is increasing her international roles. She will be taking part in numerous Forum initiatives and will review the possibility of linking the UN’s resident development coordinators in national capitals with Forum programs.

The theory underlying the creation of the SDGs, with governments as the key decision-makers, was a gamble. Human rights received no significant attention in the SDGs, reflecting numerous governments’ attitudes or demands on these issues.

Rapid social changes and their place in development were ignored: the burgeoning international movement for LGBTQ recognition and rights, new diversity in what may constitute a “family” and the rising tide of activist women challenging male domination in politics and society, to name a few.

The SDGs are unwieldy, as critics have pointed out since the adoption of the 2030 agenda. The 17 goals are burdened with 169 targets and 230 indicators for measuring progress.

The strategic partnership with the World Economic Forum is not the first UN approach to the private sector.

Stephen Browne, the author of a book that will be published later this year, “UN Reform: 75 Years of Challenge and Change,” worked for more than 30 years in the UN development system, including in Africa and Asia.

He has observed the trajectory of UN/private-sector cooperation, which has had some positive effects, he writes in the new book. With the creation of the Global Compact (which Annan introduced at the World Economic Forum in 1999), “relations with the private sector took on another dimension.”

Browne writes: “The timing was germane. Globalization was already raising anxieties about its inclusiveness and it was appropriate for the UN to be shown conveying some concern to the private sector. . . . Galvanizing private sector interest in UN goals has had the positive effect of enhancing interest in and comprehension of the world body, helping to improve its public image in commercial circles.

The UN has also become better known to the private sector through the many GC local networks which have been established in all the major emerging economies.

“But the GC [Global Compact] has also carried risks for the UN, leaving it open to accusations of associating with companies indulging in corporate malpractice. . . . The Global Compact cannot wholly avoid ‘blue wash’ [the UN equivalent to whitewash in the eyes of critics] but it restricts the use of the UN logo and establishes conditions for the selection of commercial partners. . . . Companies are in a large majority on the GC Board and are the principal contributors to the trust fund which supports the GC secretariat. Critics have claimed that the GC serves as a platform for the promotion of corporate interests at the UN, and not the other way round as originally intended.”

“There is a sense, however,” Browne writes in his forthcoming book, “that the UN perceived these initiatives as ends in themselves: any partnership being better than none. There has never been a rigorous attempt to evaluate the UN’s [multistakeholder partnerships] and determine whether they actually add significant value. . . . It is not even clear to what extent they have succeeded in mobilizing additional funding.”

Partnerships with corporations and rich foundations have drawn sustained criticism from various civil society sectors, especially when companies are producing and promoting goods — foods, for example — that are considered to have harmful effects on children or the general population.

In a message from Geneva, where he lives, Browne described his persistent qualm about reliance on private-sector agreements and compacts: “My real contention,” he wrote, “is that the UN goes into partnerships as if they are a desirable end in themselves, without having determined what real net human development benefits have flowed from them, or could flow.”

The post As the SDGs Falter, the UN Turns to the Rich and Famous appeared first on PassBlue.