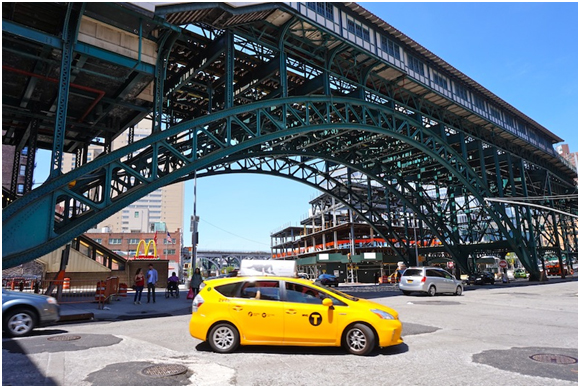 NEW YORK, May 24 2017 (IPS) - On a busy Friday afternoon, the number 1 subway train heading north through Manhattan’s Westside comes out of a dark tunnel –and if one takes a minute to release oneself from communication devices—one can catch sight of the approaching 125th street in the distance, the crosswalk buzzing with yellow cabs.

The train station at 125th street and Broadway that sits high above the commotion below on a green arch bridge is the first clue that a passenger has reached Harlem, the gateway portal to the historic New York City neighborhood.

Last week, the Consortium for Sustainable Urbanization and UN-Habitat organized a discussion at the United Nations headquarters that brought together stakeholders from the private sector, the UN system, government, academia and civil society to share ideas for creating and sustaining gateway portals — ultimately emphasizing the need to utilize urbanization as a tool for development.

Whilst many in the room were probably used to such discussions taking the route of creating bustling cities that could accommodate the highest number of urbanites in order to support political, economic and cultural agendas, it was refreshing to instead witness a focus on urban planning through gateway portals that put infrastructure center stage.

A gateway portal is an emblem of a city and can be everything from a bridge, plaza, or historic site that often welcomes one into a city or specific neighborhood. California’s Golden Gate Bridge is the most famous, linking Marin County to San Francisco in an architectural piece designed by engineer Joseph Strauss in the 1930s.

As one heads east of California, other gateway portals across the United States start popping up such as the Minneapolis Stone Arch Bridge that crosses the Mississippi River, connecting the southern and northern parts of the Midwest City. Arriving in New York, the Statue of Liberty and Ellis Island join the historic Manhattan Bridge as portals to the urban jungle – each depicting an intentional narrative of its own.

Famed architect Santiago Calatrava, a man known for his extraordinary body of work was invited to the discussion last week where he not only shared various projects, but also highlighted the necessity of portals. In his own words he mentioned that, “bridges are important pieces of infrastructure and gateway portals are to a city what infrastructure is to Sustainable Development.”

If this is true then city planners, architects and government officials are now tasked with the challenging job of thinking critically of where and how they place gateway portals. Instead of just creating entrances that mark an area and alert taxi drivers to charge toll fees, planners now have the opportunity to address issues of sustainability by utilizing smart, inclusive design that goes beyond just a pretty facade.

In 2013, author Charles Montgomery published a book called ‘Happy City: Transforming Our Lives Through Urban Design’, an anthropological text on what it meant to create sustainable spaces that were not only focused on developing a city, but also on underscoring the temperament of its citizens in relation to that development. If people were generally happy and continued to live happy lives within urban bustling communities, then was it possible that their surroundings would eventually be transformed socially, economically and politically?

“Urban spaces and systems do not merely reflect altruistic attempts to live the complex problem of people living close together, and they are more than an embodiment of the creative tensions between competing ideas,” he wrote. “They are shaped by struggles between competing groups of people. They apportion the benefits of urban life. They express who has power and who does not. In doing so, they shape the mind and soul of the city,” he concluded.

The premise of the conversation last week was straightforward: development cannot succeed without conscious urbanization. This, meaning that urbanization for development needed to include a citizen driven approach to planning and design that accounted for inclusion, health, resiliency and equality.

According UN Habitat, it is estimated that around 54% of people now live in urban areas and as this number steadily grows, the question of how to sustainably house, provide and protect a large population in such dense spaces has become a top priority for both the UN system and government officials.

A timely discussion as Habitat III concluded last year in Quito, Ecuador with the goal of adopting a new urban agenda that would offer a set of action oriented global standards that would guide the way in which we designed and sustained our cities – citizen driven urbanization would need to prioritize these global standards when building or reshaping gateway portals.

Additionally, such plans would also need to uphold the fact that gateway portals established the economic and political power of the city, and to be citizen driven would essentially mean that the portals were of service to the people who used them daily, and not the other way around. 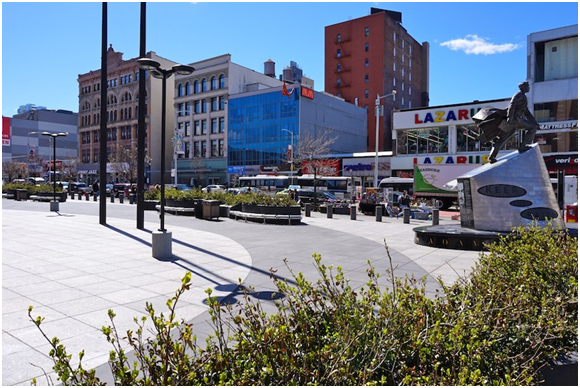 What’s In A Narrative?

During the 5th and 6th centuries, grandiose gates and high towering walls that circled a city – sometimes serving as a safety barrier in the chance of attack – illustrated the gateway portal. The narrative of a powerful gate or great wall such as the one in China laid forth the cities ambitions and easily communicated its priorities.

In 2017 with more and more people moving into urban areas, we are forced to ask ourselves what sort of narrative we’d like to have. When one arrives in Harlem, what narrative is being shared once you’ve crossed the threshold of the gateway portal on 125th street and begin your descent into the colorful street below?

New York City Commissioner Feniosky Pena-Mora spoke during the panel last week about the plans that the De Blasio administration drawn up towards creating sustainable, healthy public spaces with the agenda of changing the narrative of its city.

“We often say that we want to create spaces that work for everyone – diversity is key,” he said, continuing, “We must design to invite, and design to delight.”

This – NYC’s actual design mantra – when applied to redefining gateway portals is to simply put the citizen at the center of the vision. Yes, happiness is key, sustainability is key but city planners must also focus on creating spaces that encourage openness.

In the end, it cannot be disputed: gateway portals emphasize the importance of a city. They provide a first impression and a lasting one if curated with intent. It is with this measure that city planners and government officials must consider portals as the ‘opening line’ of their cities narrative.

Sustainable urbanization can most certainly be an effective tool for development, but must not be approached with naiveté. As the Executive Director of UN Habitat Dr. Clos put during his remarks last week, “when you address one problem, you generate two more.”

Addressing one gateway portal at a time, a city’s quest for sustainable urbanization becomes an actual possibility rather than just a city plan.