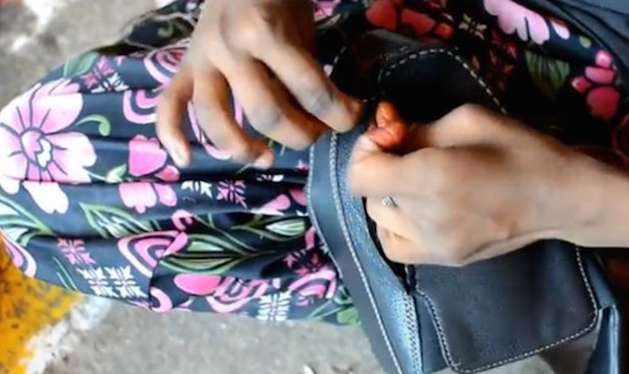 STOCKHOLM, May 31 2017 (IPS) - Working fulltime in their own homes, putting their health at risk with the chemicals they use, to make the shoes sold in the West. Indian women endure poor working conditions and earn just over 40 dollars per month.

”These workers are always women. Often housed in small living areas together with their family. Their working day starts early in the morning and goes on late into the evening”, says Brinda Devi Kamaraj who is a coordinator for the Indian human rights organisation Cividep.

It’s usually the women’s job to sew details onto the upper part of each shoe. Their pay is one tenth of a dollar per shoe.

Many of the shoes sold in shops in Western Europe are made in Asia under questionable working conditions.

Manufacturing in India, even for the well-known brands of Ecco, Diechmann, Clarks and Eurosko, often sees parts of shoes produced in the workers home environment.

Arbetet Global meets Cividep representatives in Stockholm.  They are visiting Sweden to meet people from the footwear industry and trade unions.

”Women receive materials from go-betweens. In their own homes, they sit and sew on between 15 and 20 shoes per day”, says Brinda Devi Kamaraj who estimates that regular fulltime earnings are at just over 40 dollars per month.

Her responsibility is to keep in touch with the many homeworking women in the region around the city of Ambur in the South Indian state of Tamil Nada.

During the past few weeks though she has been travelling to several European countries together with Cividep’s General Secretary Gopinathan Kunhithayil Parakuni to inform of the working conditions of the shoemakers.

”Women receive materials from go-betweens. In their own homes, they sit and sew on between 15 and 20 shoes per day”, says Brinda Devi Kamaraj who estimates that regular fulltime earnings are at just over 40 dollars per month.
”Their situation has not been given the same attention as the workers in the textile industry, where companies have made certain improvements”, says Gopinathan Kunhithayil Parakuni.

By placing production inside people’s homes, the workers are not included in social insurance programs or workplace laws and regulation.

Gopinathan Kunhithayil Parakuni explains it also allows retail prices to be kept at low levels. As well as making child labour more common as the young children help their mothers to sew.

He estimates that in their region in South India there are around 10,000 homeworkers and in the whole of India the total is in the hundreds of thousands.

The full extent of the putting-out system is hard to assess. Companies are unwilling to release information on whom is contracted, which makes tracking the system more difficult. Also, unions in the export industries have less clout.

”Employers do all they can to discourage labour unions. They fear strikes.

In other industry, like railways, and in the public sector and the financial sector, unions are quite strong. But in export industries the situation is very different.

Another issue of contention for Cividep and the footwear industry is the working condition in the tanneries where leather is produced. For example, treating and dyeing hides involves large amounts of chrome.

”In this production a lot of chemicals are used and often there is no protective wear”.

The frequent resulting consequences have been developments of serious allergies as well as both lung and skin diseases.

”These chemicals also flush out into the water system and that affects the people that live near the tanneries, says Gopinathan Kunhithayil Parakuni.

In 2014 pressure group Fair Action conducted an investigation into the footwear industry in Sweden.

Their report revealed that none of the four largest shoe retailers took measures to follow up on working conditions in the, often Asian, tanneries.