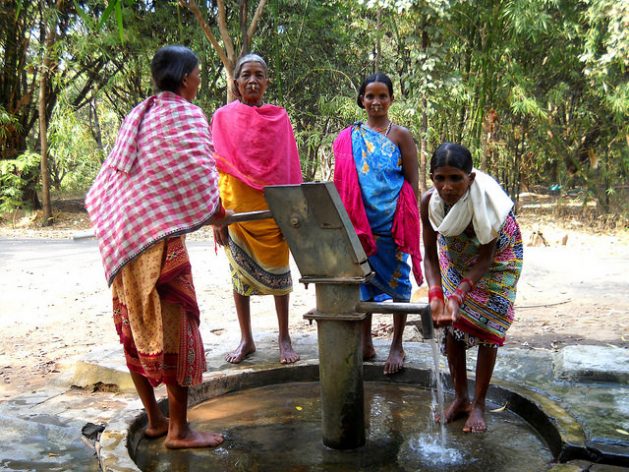 Clean drinking water is available to no more than half of Asia’s population. Water is fundamental to the post-2015 development agenda. Credit: IPS

UNITED NATIONS, Jun 14 2017 (IPS) - A report on the Sustainable Development Goals (SDGs) fails to capture the the true picture of water challenges and the UN must withdraw it, said a global civil society coalition.

The civil society coalition End Water Poverty (EWP) criticised the Secretary-General’s report on progress towards the globally agreed SDGs, stating that it lacks understanding and analysis of goal 6, which aims to ensure the availability and sustainable management of water and sanitation for all.

“Such reports should not be done in haste…they must report based on agreed indicators not outdated ones,” said EWP’s International Campaign Coordinator Al-hassan Adam, noting that the terminology and measures used in report reflect the previous Millennium Development Goals (MDGs) rather than the SDGs which are “poles apart.”

However, improved water supply does not indicate whether water and sanitation is directly accessible and safely managed, current measures of progress for the SDGs.

Currently, if a young girl has to travel 30 minutes to and from to fetch water, putting her at risk of sexual assault and increasing the likelihood of poor school participation and attendance due to exhaustion from traveling back and forth for water, water supply is considered improved.

However, the SDGs should have transformed this scenario as progress is calculated based on water supply that is within a household and available for 24 hours.

“But in 2017, a report takes into consideration the 30 minutes this young girl has to travel to fetch water and views is as progress. This is not considered progress under the initial agreement and in the eyes of the young girl, nothing has changed,” Adam told IPS.

“At a time where we have set global goals for positive changes, we must not go backwards, but only forward,” he continued.

The measure of improved water supply also fails to assess water quality, including whether it is free from fecal or chemical contamination.

The report also notes progress in the implementation of national water management plans in 2012 as well as procedures to engage local communities in numerous countries. What is not included, however, is the quality and level of such plans and participation.

EWP noted that such language has negative global implications as it allows governments to neglect the provision of adequate services to their citizens.

“In December 2015, we all celebrated when the Sustainable Development Goals and the 2030 Agenda were agreed, for the people and the planet…unfortunately, the latest progress report shows that we might be sleep-walking into 2030 without any substantial gains made,” they stated.

The coalition urged the UN to withdraw the current report and to amend its content with accurate data and indicators on the availability and sustainable management of water and sanitation as agreed upon in the SDGs.

“To reach the Sustainable Development Goals, we cannot continue to do business as usual. The UN should direct us all towards the right path through accurate reporting on the progress and failures of the SDGs” Adam concluded.

EWP is a coalition of water, sanitation, and hygiene organisations from around the world including Action Against Hunger, Care International, and Oxfam.

According to the UN, global demand for fresh water is predicted to grow by more than 40 percent by 2050 and at least a quarter of the world’s population will live in countries with a chronic or recurrent lack of clean water.

Secretary-General Antonio Guterres highlighted the consequences of growing water shortages around the world, telling the Security Council: “Water, peace, and security are inextricably linked. Without effective management of our water resources, we risk intensified disputes between communities and sectors and increased tensions among nations.”