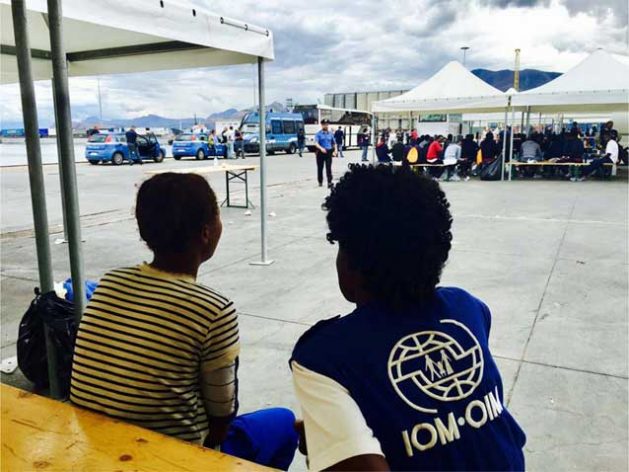 ROME, Jul 28 2017 (IPS) - Up to 80 per cent of Nigerian migrant women and girls arriving on Europe’s shores in Italy could potentially be sex trafficking victims, spotlighting the horrific levels of abuse and violence migrants face along their arduous journeys for a better future, according to a UN study.

In its report, “Human Trafficking through the Central Mediterranean Route” (in Italian*), the International Organization for Migration (IOM) highlights the plight of those who have been assisted by the UN agency and calls for urgent action against the “market” which are supplied these victims was well as what is called is a “growing demand” for paid sexual services.

“Trafficking is a transnational crime that devastates the lives of thousands of people and is the cause of untold suffering,” Federico Soda, the Director of the IOM Coordinating Office for the Mediterranean, said announcing the findings.

“This is a theme we have been working on for years, committing to protect, prevent and collaborate with the authorities dealing with organized crime.”

According to the UN agency, over the past three years, its office in Italy has witnesses an almost 600 per cent increase in the number of potential sex trafficking victims arriving in Italy by sea. The upward trend has continued during the first six months of this year, with most victims arriving from Nigeria.

The data feeding the report was drawn from IOM operations in various parts of Italy, where staff met with potential victims of trafficking as soon as they reached the country, allowing the UN agency to develop a list of indicators that can help identify potential victims.

Described in the report, the indicators include gender (most sex trafficking victims are women); age (most victims age between 13-24 years); nationality (most are Nigerians); and psycho-physical wellness (victims are mostly silent and often “controlled” by other migrants who speak on their behalf or refuse to let them be interview by IOM).

When IOM staff identify a potential victim of trafficking, they explain to them that it is possible to access protection mechanisms and, with the victim’s consent, the staff inform the anti-trafficking helpline about the victim.

Also, if the person agrees, IOM staff provides assistance in communicating and filing a report to the investigating authorities.

“The report describes IOM’s activities in the face of this phenomenon: the difficulties in protecting victims and the main vulnerabilities identified among several cases of people who were assisted by [the agency],” said Carlotta Santarossa.

“We also wanted to tell some of the stories of people who have been assisted by IOM staff to highlight the true nature of this painful and hateful form of slavery.”

(*The English version of the report will be released shortly, according to IOM)