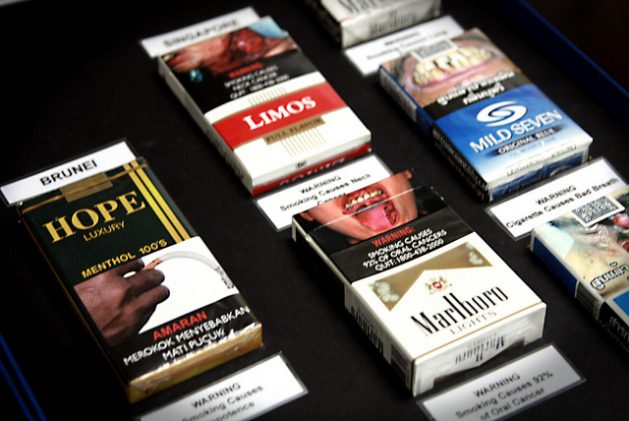 Stressing the urgent need to curb deaths from smoking, Dr. Vinayak Prasad, the head of WHO’s tobacco control programme, told IPS that “countries have to monitor tobacco use and prevention policies at the best-level.”

He mentioned the adoption of core policies, called MPOWER, to monitor and protect people from tobacco smoke. At the highest level of implementation of these policies, countries will have eliminated tobacco-related deaths.

“The focus of the report is to monitor effective implementation of policies. The trend is good, but there’s room for vast improvement. Many countries are helping people to quit by putting out larger warning labels, but there’s no stringent action by measures of raising tax, for example,” said Dr. Prasad.

Still, there is good news—almost 71 countries have two or more of MPOWER policies in place, protecting a total of 3.2 billion people worldwide. In 2007, only 42 countries had some policy in place.

Every country, of course, follows a mix of different measures.

In terms of the newer countries on board, Afghanistan and Cambodia have adopted smoke-free laws in indoor public places and workplaces. Other countries have expanded existing measures—Nepal and Bangladesh passed laws at the national level for larger warning labels clearly demonstrating the harmful effects of smoking.

Still others, like Austria and Malta, have adopted the surest but politically most charged approach to combat the epidemic—raising taxes.

“The important issue is to support the benefit of raising taxes—it’ll bring down both demand and generate resources. In Philippines—which raised taxes in 2012—two things happened. The country generated extra revenue by as much as 5 billion dollars, and the use of tobacco declined. More governments have to understand this,” said Dr. Prasad.

The importance of raising taxes so that governments are able to spend that extra money on healthcare is a crucial and proven linkage, but has faltered after enormous pressure from powerful tobacco lobbyists to maintain the status quo.

“The countries which have shown progress are moving in the right direction. There needs to be greater political will because we have the evidence and the knowledge to back it up. We need to understand that the tobacco industry is not our friend,” Dr. Prasad explained.

Similarly, adoption of other effective measures like a comprehensive ban on tobacco advertising and promotion also ranks low among countries. Mainly low and middle income countries, like Afghanistan and Senegal, among five others, have implemented the policy.

Combating a tobacco epidemic does not rest on curbing sale of cigarettes alone. Tobacco can be consumed in several other ways, such as its widespread consumption as khaini and bidis in India.

“Of the 300 million smokers in India, 72 million smoke bidis. The majority of the population consume khaini,” explained Dr. Prasad on the multifaceted tasks of fighting the tobacco industry.

The report was launched on the sidelines of the UN high-level political forum on sustainable development. Controlling tobacco is a key part of the 2030 Agenda for Sustainable Development (SDGs).