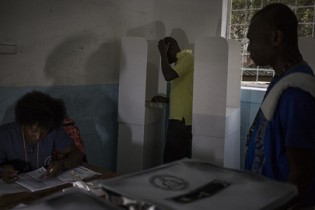 By Roshni Majumdar
The UN peacekeeping mission ended its operations in the Caribbean nation of Haiti after 13 years on October 15. The UN Stabilization Mission in Haiti (MINUSTAH), which aimed to bring stability to a politically chaotic Haiti of 2004, will transfer power to the UN Mission for Justice Support in Haiti (MINUJUSTH), a much smaller successor mission that is going to assist the government on security issues.

By Roshni Majumdar
Six out of ten children in the world are not achieving basic proficiency in reading and mathematics, a new report by the United Nations Educational, Scientific and Cultural Organization (UNESCO) shows.

By Roshni Majumdar
A Manual for Investigative Interviewing to abolish torture among detainees suspected of crime is in the pipeline, UN High Commissioner for Human Rights Zeid Ra'ad Al Hussein said today.

By Roshni Majumdar
In February, when the government of Somalia sounded an alarm to the UN about risks of a famine in the country, the UN’s Office of Coordination of Humanitarian Affairs (OCHA), besides quickly shuffling a response team, was acting from a steep sense of history. The Office, instead of sending out massive aid packages, distributed cash vouchers to families who could spend it to buy goods according to their needs.

By Roshni Majumdar
After sending a team to investigate the human rights conditions in Venezuela amid growing political and economic crisis, the UN Human Rights Office has reported that the crushing of anti-government protests point to the “the existence of a policy to repress political dissent and instil fear in the population to curb demonstrations.”

By Roshni Majumdar
The battle to reclaim Raqqa, the de facto capital of the Islamic State of Iraq and Levant (ISIL/Da’esh), has raised concerns among top UN officials as at least 20,000 civilians remain trapped under heavy fire in the city. Last week Monday, 42 civilians, including 12 women and 19 children, were killed in an air attack, according to the AP.

By Roshni Majumdar
United For Iran, a non profit group based in Berkeley, recently rolled out its latest mobile app Michka to open discussions about child sexual abuse in Iran, where treading into the topic is deemed as taboo.

By Roshni Majumdar
While voters in Venezuela overwhelmingly rejected President Nicolás Maduro’s plan to amend the constitution recently, similar tensions and a clash between protesters and state authorities appears to be brewing across the Atlantic in the West African nation of Mauritania.

By Roshni Majumdar
Jordan’s Zaatari camp, which opened in 2012 as a makeshift camp to house Syrian refugees fleeing the war, marked its fifth year on June 28.

By Roshni Majumdar
Seven million people die each year from tobacco-related deaths, according to a new report published by the World Health Organisation today.

How to Achieve Universal Goals, Strategically

By Roshni Majumdar
Discussion around the 2030 Agenda for Sustainable Development, a list of 17 goals listed by the UN, was all the buzz in the conference rooms of UN headquarters this week.

By Roshni Majumdar
More than two billion people lack access to clean and safe drinking water, according to a new report released by the World Health Organisation (WHO).

By Roshni Majumdar
The failure of European Union (EU) to buckle up safety for migrants and refugees reaching its shore has been condemned by Amnesty International in a report today.

By Roshni Majumdar
As US-backed Syrian rebels plow ahead in the fight to take back Raqqa from the Islamic State in Iraq and the Levant (ISIL) in Syria, the stake of civilian lives, who number as many as 100,000 in the city, has raised concerns among top UN officials.
Next Page »
ADVERTISEMENT ADVERTISEMENT